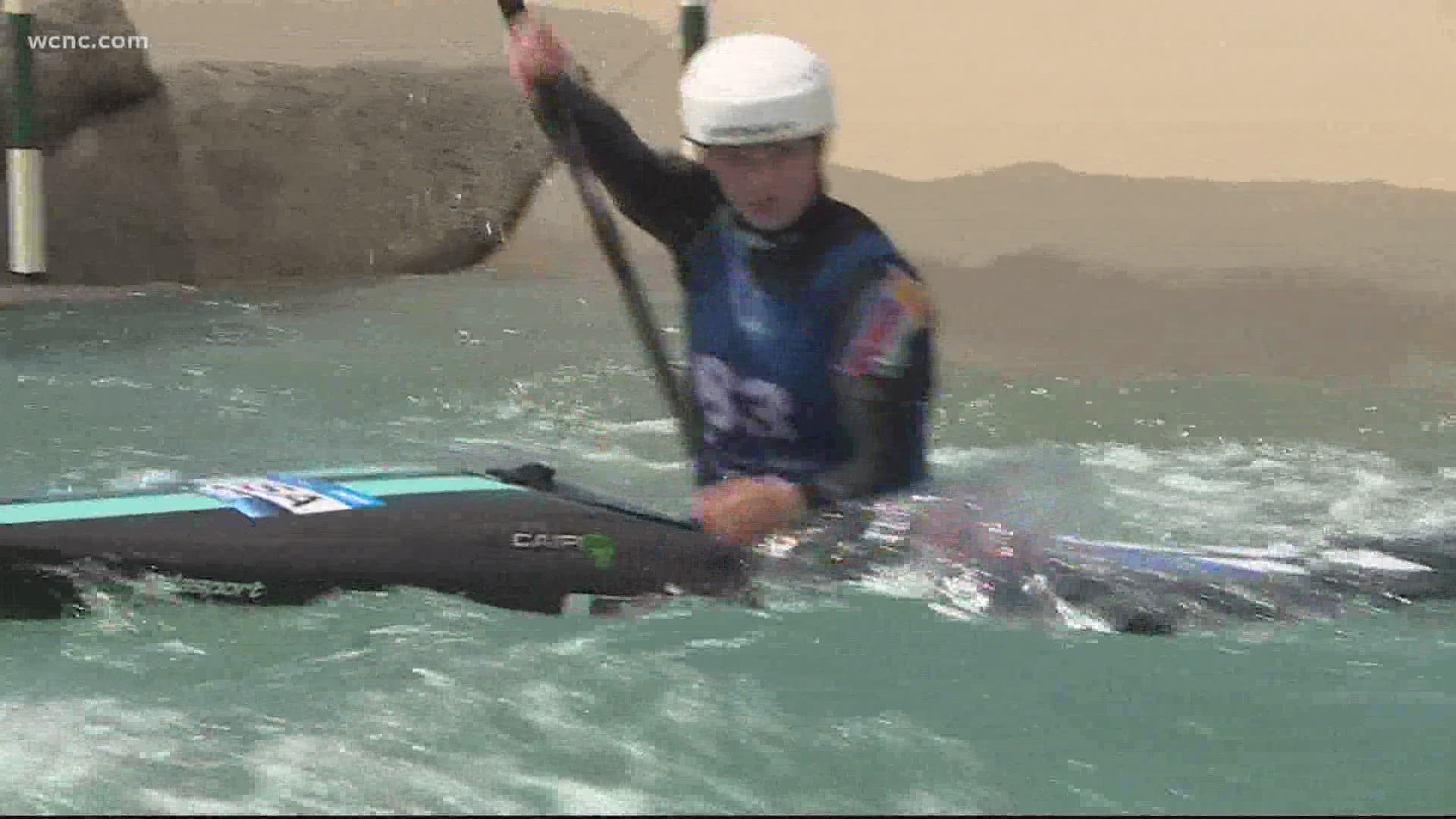 CHARLOTTE, N.C. — When most people kayak or canoe at the U.S. National Whitewater Center in Charlotte, it's on flat water for a nice, relaxing ride.

But at the U.S. Olympic Team Trials held there this week, it's a completely different activity.

"It's definitely a little bit scary sometimes especially here at big drop," Bryson City native Evy Leibfarth said. "You're going down and you see this huge brick wall of white water that you have to get through."

In these slalom events, competitors must navigate a series of gates through the roaring rapids. If you go through the wrong way, or even touch them, you will incur a costly time penalty.

But Leibfarth, 17, doesn't seem to feel that pressure.

The best paddlers make it look smooth and easy. And despite being a teenager, Leibfarth is one of the best in the world at it.

"It's so cool because you actually use the water to take you in to the next gate," she said. "It's not like you're fighting the water. You're really just working together with it."

Leibfarth is from a family of experienced paddlers and grew up on the Nantahala River in western North Carolina.

"So when I was young I think I was probably two years old on my Dad's lap going down the river," she said. "And he's coaching me now so it's a family thing for me."

The family now rents a house in the Charlotte area so Evy can train at the Whitewater Center.

One of the most seasoned in the sport has noticed her rapid rise.

"I think she just has an innate understanding of how it works," three-time Olympian Casey Eichfeld said. "She just understands the water so well. She has those reactions that are necessary to paddle well. But she developed them quite early. Much earlier than most athletes do."

In fact, she was not even competing at the senior level until 2019, and this week she dominated the trials in canoe and kayak.

That means at just 17-years-old, Leibfarth is qualified for the summer games in Tokyo.

"Oh my gosh, going to the Olympics is something I've dreamed of since I was so little," she said. "I definitely cried when I went through the finish and saw my time, and knew that I was going."

According to NBC Sports, athletes can only choose one event for the Olympics, and will compete in her higher-ranked event, the canoe slalom.

Rebecca Giddens was the last American to medal in canoe/kayak, winning silver in kayak slalom at the 2004 games in Athens.

Leibfarth was recently accepted to Davidson College, and plans to attend after taking a gap year.