The tornado touched down near I-85 and continued east with winds of 125 mph. 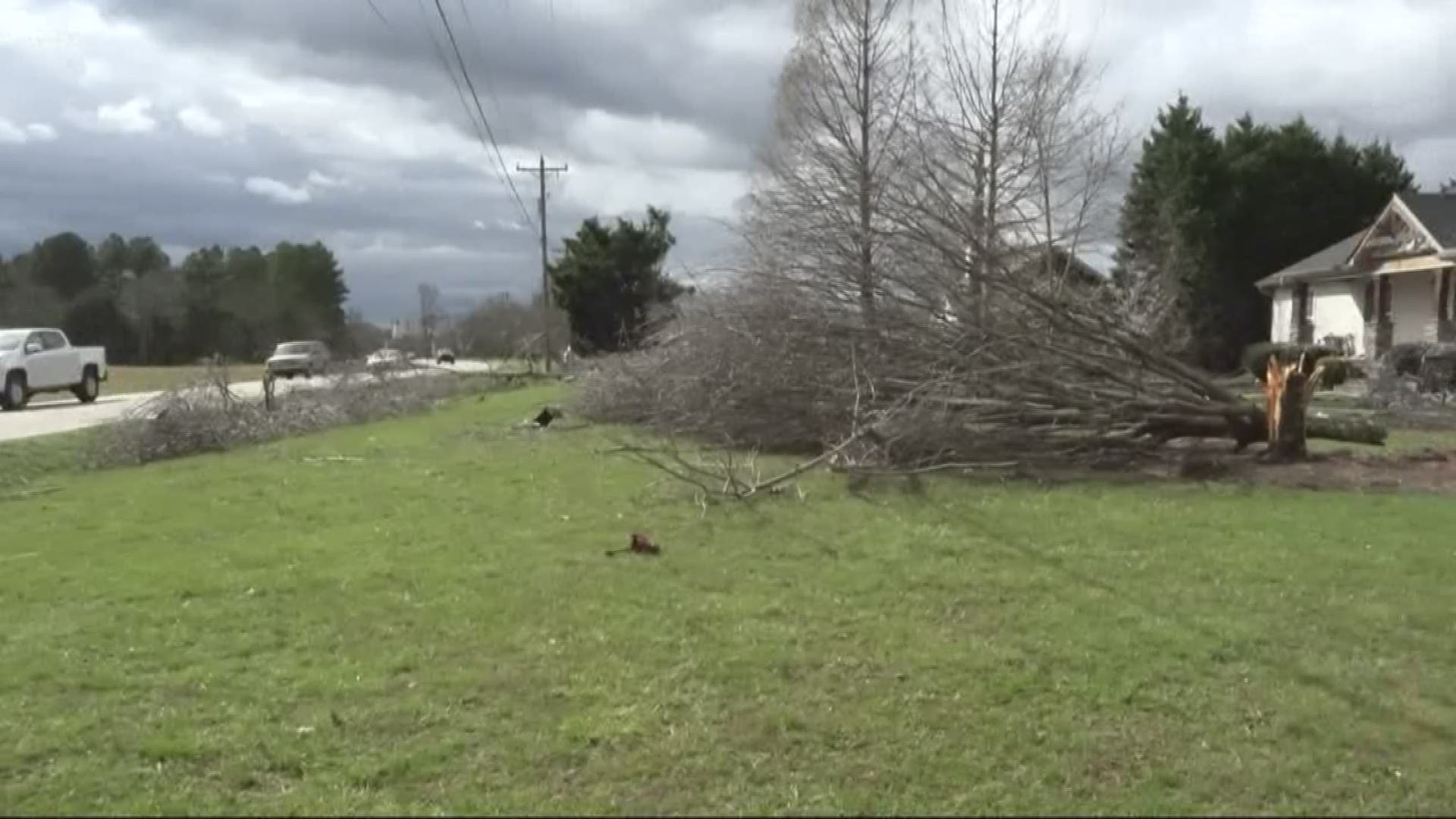 A roof was completely ripped off a home on Old Salisbury Concord Rd in Kannapolis. At the time of the storm, a 16-year-old boy was inside the home. He said he ran to a closet with his cat as he heard glass shattering.

"I saw a wall of rain and wind come, so then I bolted for the cat and the closet", said the 16-year-old boy.

On Friday, investigators from the National Weather Service confirmed an EF2 tornado ripped through the community for over 6 miles.

The tornado began near Interstate 85 and continued west through Cabarrus nearing Rockwell.

Along the way, winds upward of 125 mile extensive damage.

Families spent Friday scrambling to get tarps on roofs that had been torn away, while others grabbed their chainsaws to begin removing trees that had fallen.

“This furniture was along the deck,” says Mckenna Morgan, who pointed to furniture blown into the neighbor’s yard across the street. Morgan says she was at her grandparent’s home, on Old Salisbury-Concord Road, sheltering in a bathroom when the tornado blew through the front yard. 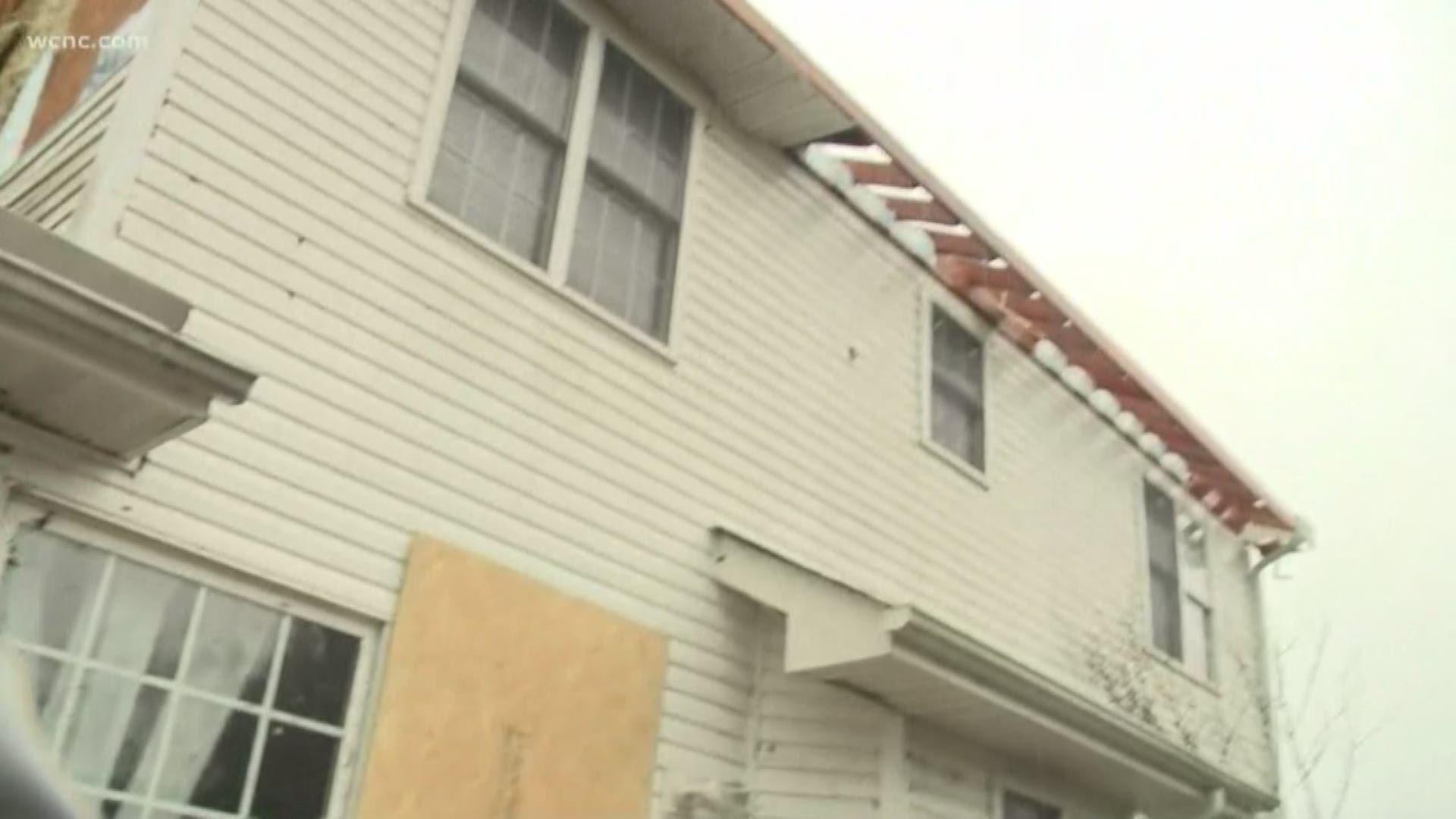 “Honestly it sounded like a big boom, it was horrible,” she says.

The Morgan’s are not alone. Pictures taken from a drone show the damage done to several homes on this street and blocks away. Bryan Pless who took the photos, says he grew up nearby and has never seen anything like this.

“They’re pretty rough for the people who live in these houses, I feel sorry for them. I’m going to go up there and see if they need help here in a minute,” said Pless.

Just down the street on Irish Potato Road the Stegall family busy removing a tree that had fallen blocking their driveway.

“I didn’t know what to expect about our house being there or not, so I crawled under and went to check it out and the trampoline was thrown like 100 feet from the house, it was folded in half,” says 16-year-old Benjamin Stegall.

Stegall says his school, Rockwell Christian, released at 11:30 p.m., putting him and his family on the road right as the tornado hit.

“We were going around a road and all of sudden the skies turned black and everything. I think we went through the side of the tornado almost because we couldn’t see three feet in front of us at all and it was pouring down rain and we had to park the car and wait for it to pass,” he says.

Other homes on Irish Potato Road also seeing significant damage, with clear paths of debris laying across fields, trees snapped in half, with many trees landing on top of homes.

One neighbor says they didn’t have any significant damage until Friday and blamed the saturated ground and winds for knocking down even more trees.

A likely tornado touched down in Kannapolis Thursday morning, the city of Kannapolis said. The National Weather Service will investigate the damage Friday to confirm.

One neighbor says they didn’t have any significant damage until Friday and blamed the saturated ground and winds for knocking down even more trees.

A likely tornado touched down in Kannapolis Thursday morning, the city of Kannapolis said. The National Weather Service will investigate the damage Friday to confirm.

Multiple tornado warnings were issued across the Charlotte area as a powerful line of thunderstorms moves across the region the Carolinas Thursday morning, including multiple confirmed tornadoes along I-85.

Tornado Warnings were issued in nearly every county along I-85, including Mecklenburg throughout lunchtime. A neighborhood in Kannapolis suffered pretty heavy damage from a confirmed tornado on Lane Street at I-85. Emergency Management crews said a tornado was spotted on the ground in that area Thursday morning.

The entire Charlotte area was under Tornado Watch until 5 p.m. Thursday.