‘They bonded; they belonged together’ | Dog leans over casket to tell ‘Daddy’ goodbye

The picture was taken by Anne Marie Sibthorp's 12-year-old granddaughter and posted to Facebook by James Funeral Home in Huntersville. 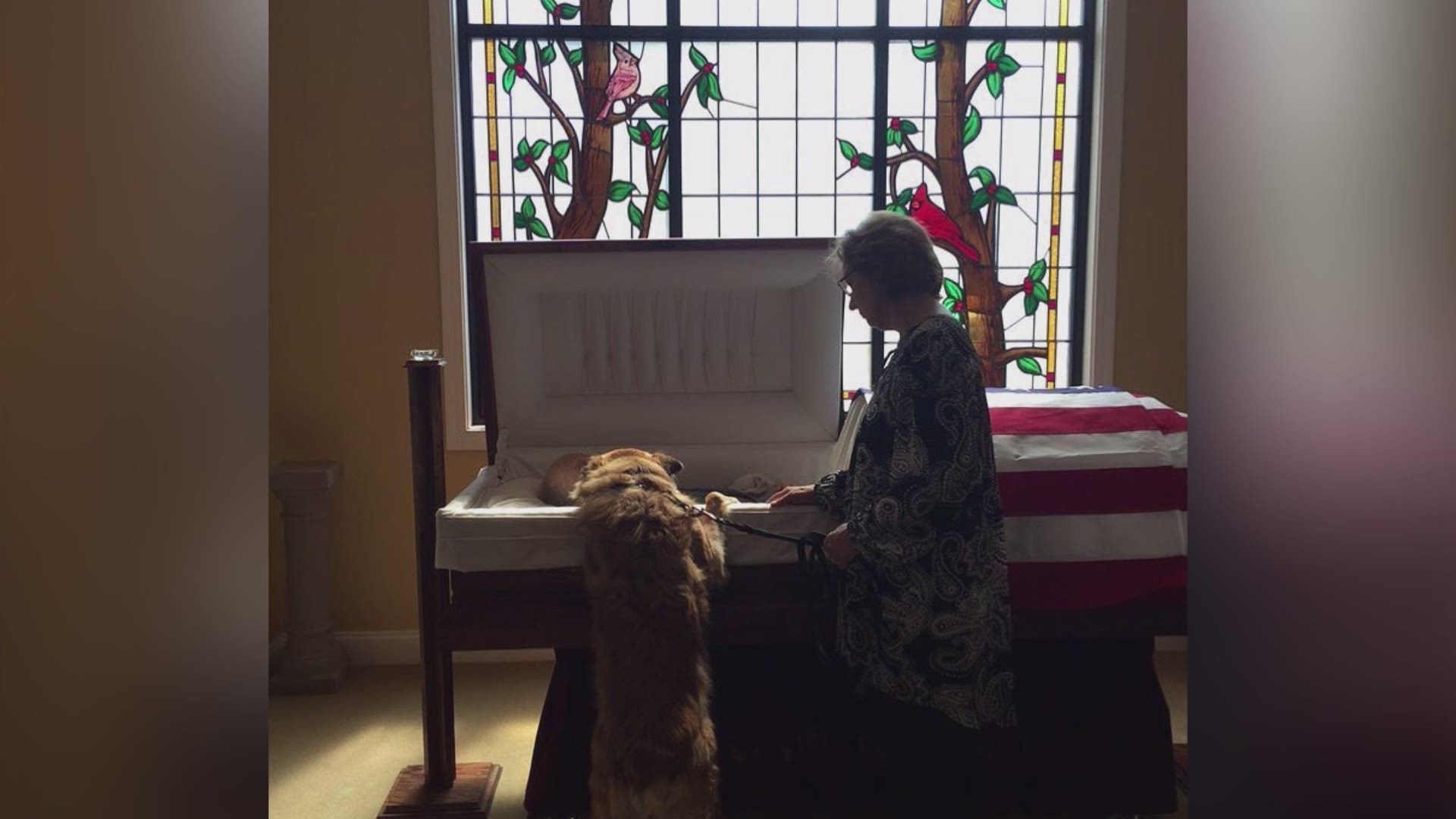 HUNTERSVILLE, N.C. — A picture taken by a 12-year-old girl and posted on a funeral home’s Facebook page captured a tender moment between man and his best friend.

“To see a dog standing on his tippy toes looking into a casket struck the heartstrings of this community.”

Sam James is the director at James Funeral Home in Huntersville.

“Anne Marie (Sibthorp) sent us the photo,” said James. “We asked if she would mind if we shared it with the community because we found it to be such a touching photo.”

“I didn’t even know she was taking it,” said Sibthorp about her granddaughter, Nina Holcombe, who snapped the picture.

Sibthrop took Chief into the chapel for a private viewing of her boyfriend, Bill Schiller, on April 11.

“I’ll never forget. He stretched his neck in as far as he could, and he gave Bill just one little quick lick on his ear, and of course, Bill didn’t move,” Sibthorp said. “And Chief laid his head right down by his head, and just laid there for the longest time.”

James Funeral Home
A touching moment in our chapel yesterday when "Chief" said goodbye to his best friend.

Chief and Schiller were buddies from the beginning. Sibthorp rescued the dog in 2014.

“There’s a certain chemistry between a person and a dog when they’re really special,” said Sibthorp. “They bonded; they belonged together.”

In fact, if it wasn’t for Schiller, Sibthorp may have rehomed Chief because he was so wild.

“I wanted a small dog,” said Sibthorp. “He was young and strong, and I didn’t think at my age I could handle that much of a dog, so I had him trained.”

But Chief’s fate was sealed once Schiller laid his eyes on the pup.

“I kept telling him I’m going to have to find this dog a home, with a mommy and a daddy and kids,” said Sibthorp. “He walked in the house and took one look at Chief, he didn’t say anything to me, he just took one look at this dog and said, ‘We’re keeping that dog.’”

Schiller had owned a dog once, but only for a short time.

“He was in the military. He worked a full-time job. He went to school. He taught flying. He just never really had an opportunity to have a pet,” said Sibthorp.

Schiller lived in Florida and visited Sibthorp and Chief in Huntersville until the fall of 2017 when he was diagnosed with dementia. Schiller then moved into Sibthorp’s home, where Chief’s companionship became even more important.

Sibthorp realized if Schiller ever had to seek care outside her home, the dog might not be allowed to join him. So she trained Chief again – this time as a therapy dog through a non-profit called Invisible Paw Prints.

“He was able to go everywhere,” Sibthorp said.

When Schiller was eventually admitted into nursing homes and hospitals, Chief followed. The dog’s presence not only brightened his day but others' as well.

Sibthorp recalled one patient she’d seen several days in a row who seemed particularly down. The woman asked if she could pet Chief.

“She took both of her hands, and she just kinda went all over his head, and she started smiling,” said Sibthorp. “Just his big old woolly head made somebody happy. That’s what he does best.”

Sibthorp and Chief kept visiting Schiller as his health declined. She recalled the last time Chief went to see him in the hospital.

“Bill wasn’t really opening his eyes much. I mean, he was conscious, and you could talk to him, but he was weak,” said Sibthorp. “I took Bill’s hand, and I put it over on Chief’s head, and Bill smiled. And he just petted him.”

At the funeral home, James said he’s often compelled to accommodate requests to have dogs or cats in the chapel. The deep bond between pets and people is something he’s witnessed time and time again.

“He got to say goodbye to his daddy. And that was important,” said Sibthorp. “It meant a lot to Chief to be able to do that. He knows now that daddy’s okay, and he’s stuck with me.”

Sibhtorp plans to continue Chief’s work as a therapy dog and visit as many places as they’re allowed.

“There’s something about petting a dog that makes us relax and realize life is good,” Sibthorp said. “I always say, Chief is not the dog I wanted, but he’s the dog God wanted me to have, and he has really proven to be that.”