Some say when Prince Harry and Meghan got married there were nods to Queen Charlotte. 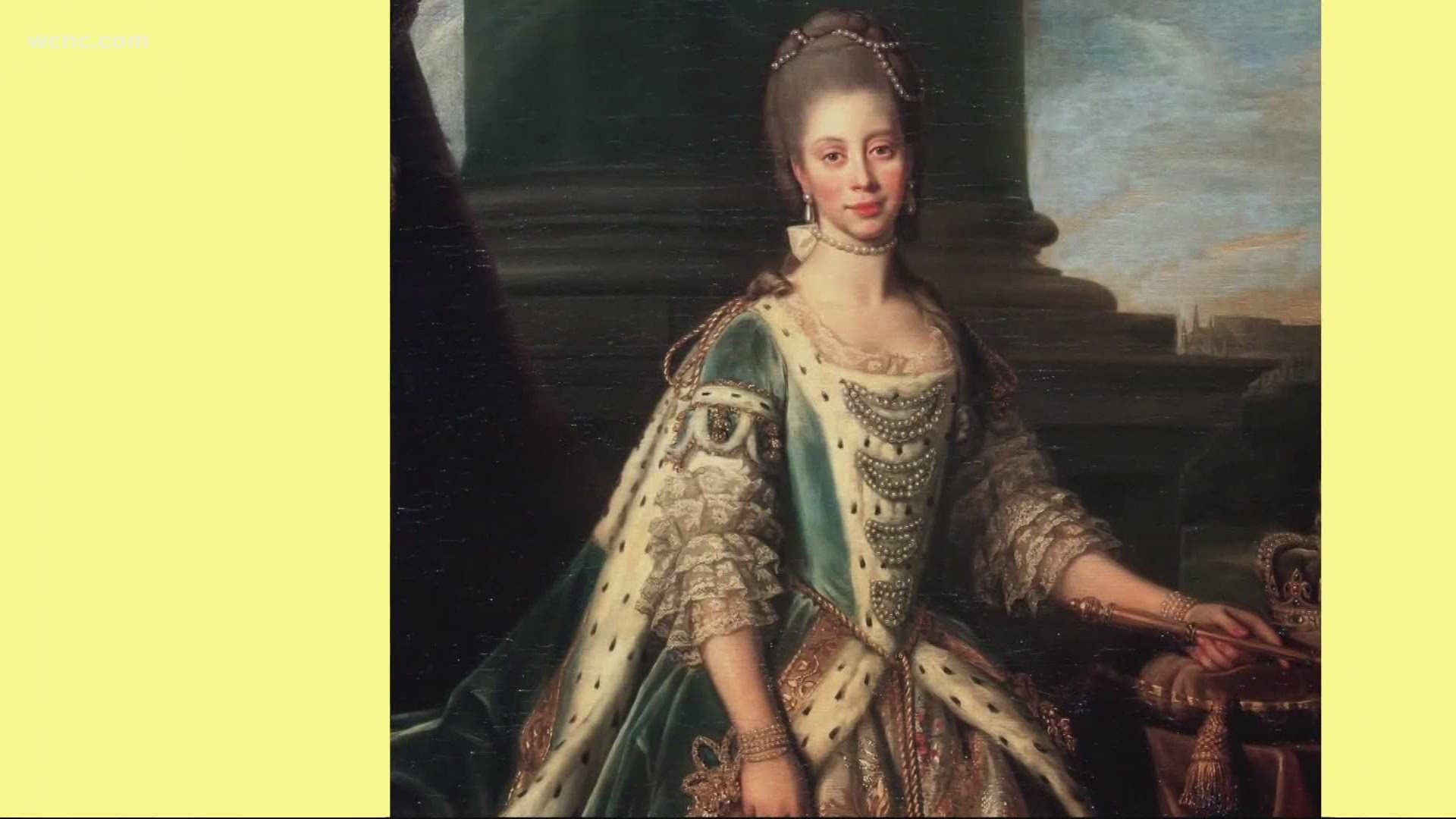 CHARLOTTE, N.C. — The hit Netflix series Bridgerton is bringing renewed attention to the mixed-race British queen our city is named after.

Tom Hanchett, the community historian in Charlotte, said, “Queen Charlotte of course is the namesake of our city.”

He told WCNC Charlotte’s Sarah French that Queen Charlotte was a German-born princess from Mecklenburg-Strelitz, Germany. However, her ancestral roots can be traced back nearly 500 years to King Alfonso III of Portugal.

“Before her German ancestry, she had roots into a Portuguese royal family, the family of King Alfonso III," Hanchett said.

Up until the 1100s, there was an Arab and African occupation of Portugal. This is where King Alfonso III found his wife, who was a Moor. In those times, the word Moor was used to describe people of Arab or African descent.

When referring to King Alfonso III, Johnson said, “He sorta marched with his troops into a Moorish held town called Faro, and he demands the governor’s youngest daughter."

“It wasn't a marriage. It was more like concubinage, but it comes from a very high order," Johnson said.

Their son, Martín Alfonso (born 1250), then married into a family with African ancestry -- the Sousa family -- further cementing Queen Charlotte's Black heritage when she was born in 1744.

“Remember in the 1300s we hadn't yet gone into the slave trade, so there wasn't the stigma that came later on," Johnson explained.

The hit @Netflix series @Bridgerton bringing renewed attention to the queen our city is named after, Queen Charlotte. I spoke w/ local historians about her African Ancestry. It's a wonderful history lesson! Watch tonight at 11! @WCNC @TheMintMuseum #BlackHistoryMonth pic.twitter.com/y8CWFCyLRW

“Shonda Rhimes puts a Black actress as Queen Charlotte and now it has everybody talking about history," French said.

“I think it's great! I also think that it's good because it causes conversations like this one," Johnson replied.

Queen Charlotte, born Sophia Charlotte of Mecklenburg-Strelitz, was born on May 19, 1744 in the small northern German territory ruled by her parents: Duke Charles Louis Frederick of Mecklenburg Princess Elisabeth Albertina of Saze-Hildburghausen, according to the official Royal archives.

Queen Charlotte would go on to marry King George III, the British monarch who lost the Revolution and the colonies.

RELATED: Historic Black colleges to get $650,000 to preserve campuses

The 18th-century portrait of Queen Charlotte, by Sir Allan Ramsay, was used as propaganda in the colonies to win over enslaved Blacks to Britain during the Revolutionary War. It now hangs in the Mint Museum, in Charlotte, North Carolina.

“Any school child that comes to the museum remembers seeing that portrait of Queen Charlotte,” Jonathan Stuhlman, Senior Curator of American Art at the Mint Museum, said.

In 2007, artist Ken Aptekar was commissioned by the Mint Museum to explore Sir Allan Ramsay’s portrait of Queen Charlotte.

That sparked a dialogue that led to six images and a variety of interpretations of the queen.

“The six panels are what Aptekar created in response to Queen Charlotte. His work is really community-based and driven,” Stuhlman said.

“Can you talk about what people saw when they saw her portrait," French asked.

“There are phrases like ‘Black, White, Other’ on one of them. There's another one that just says immigrant," Stuhlman replied.

Queen Charlotte is a mainstay of the North Carolina city that bears her name and birthplace.

Charlotte, North Carolina, located within Mecklenburg County, had longed featured a statue of Queen Charlotte statue at Charlotte Douglas International Airport. Her portrait remains on display at the Mint Museum in uptown Charlotte.