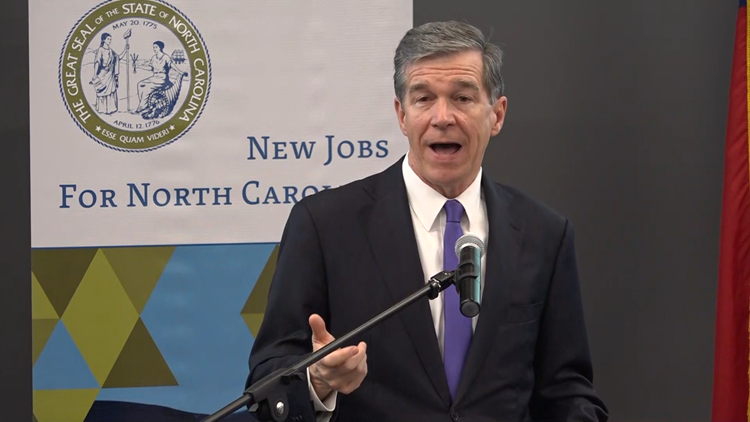 RALEIGH, N.C. — North Carolina's governor vetoed bills that increase teacher pay, describing the increases as "paltry" and asking Republican legislators to work with him for higher salaries for teachers.

The state shouldn't accept the inadequate raises approved last week by the GOP-controlled legislature, not "when we have an opportunity to do more," Gov. Roy Cooper said at a news conference Friday.

Cooper said he vetoed four bills:  two dealing with pay increases for teachers and noninstructional staff and two others that he said allow for "fiscally irresponsible corporate tax cuts."

The pay-raise bills that Cooper vetoed included teacher raises of 3.9% over two years, including step increases for longevity. The bills also included a 2% raise for noninstructional staff.

"The General Assembly continues to shortchange teachers and non-certified personnel like cafeteria workers, bus drivers and teacher assistants, despite a robust economy and decent raises for other state employees," Cooper said in a news release.

He said he was willing to negotiate salary increases as part of a "mini-budget," like previous ones that Republicans passed when they couldn't muster the votes to override Cooper's veto of the entire budget. And he said he would do so separate from the Medicaid expansion that's a main focus for the governor and is one of the reasons that Cooper and legislators are at a stalemate on the budget.

Republicans expressed disinterest in working with Cooper, who "uses teachers as pawns, blocking their pay increase then trying to convince them it's all the Republicans' fault," Senate leader Phil Berger said in a news release.

House Speaker Tim Moore seemed dubious that Cooper would negotiate the salary increases separately from other issues. "His refusal to raise teacher pay in favor of playing political games on separate issues is causing real harm to educators' families ..." Moore said in a news release.

The adjournment resolution says they can also return to vote on House-Senate compromise legislation that has or is already being negotiated, such as hemp farming legislation and another funding bill to pay for recent hurricane damages.

The resolution also said that overrides of Cooper's vetoes won't be considered until January. That means action can't occur on the budget bill or funding to carry out the state's long-planned Medicaid managed-care overhaul.

But legislative leaders have enough parliamentary maneuvers that they can use to take action if they decide to do so.

Mural of activist Greta Thunberg going up in San Francisco