Louisville became the first city in the South to pass a "Right to Counsel" law. The city's using federal pandemic funding. Advocates want Charlotte to do the same. 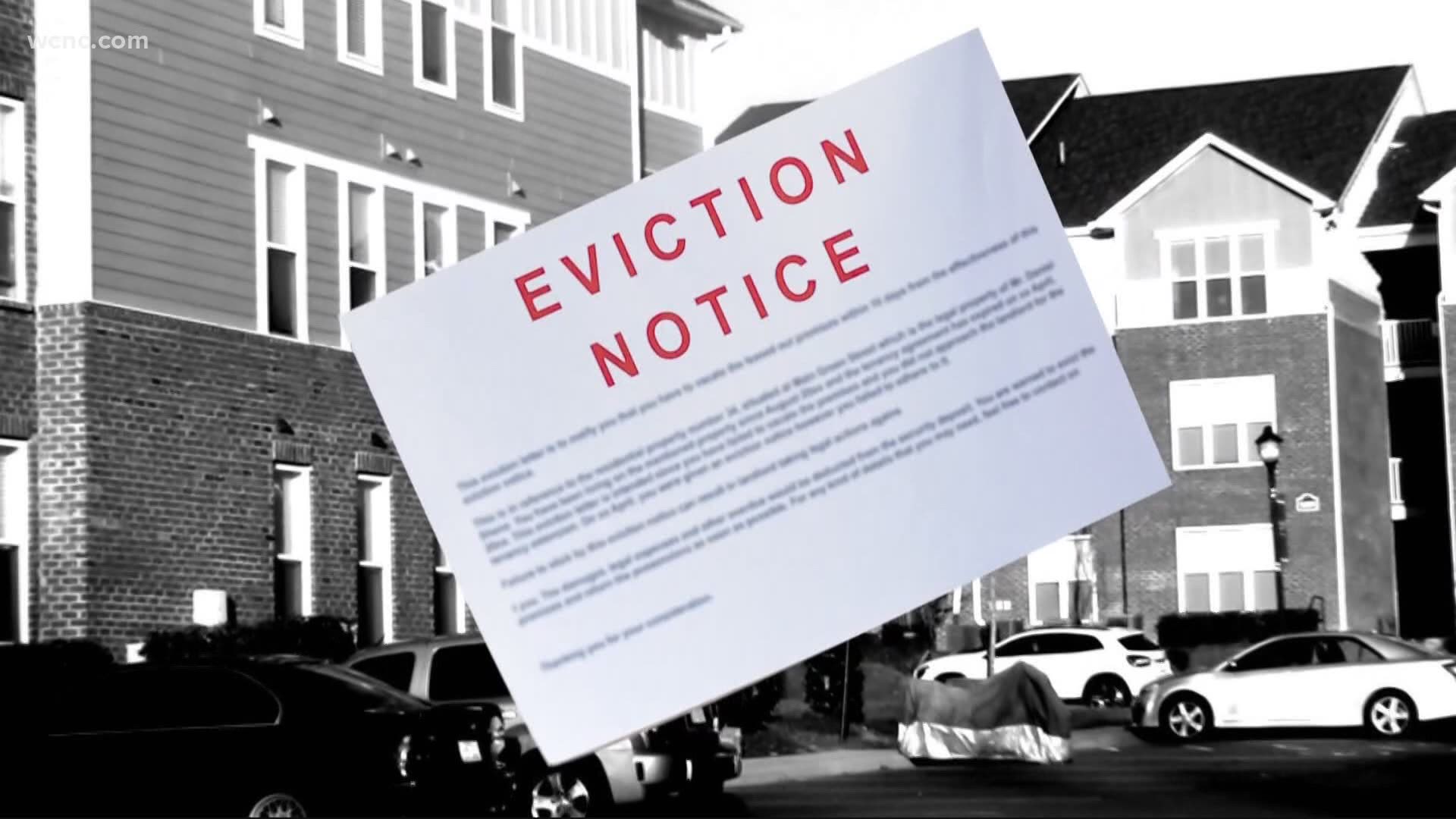 MECKLENBURG COUNTY, N.C. — A new study found there are not nearly enough attorneys for North Carolinians facing housing-related legal problems and the inadequacy is a top area of need statewide.

"In Pursuit of Justice:  An Assessment of the Civil Legal Needs of North Carolina" comes in the face of the growing tenant "right to counsel" movement, which guarantees free lawyers to people facing eviction.

Louisville became the ninth city and the first in the South to pass a "right to counsel" law just last month. The Courier-Journal reports Louisville is using federal pandemic money to pay for the program.

The Charlotte Center for Legal Advocacy joins Legal Aid of North Carolina in supporting "right to counsel" laws in Charlotte and statewide.

"It's something that we could do and we should do," Executive Director Kenneth Schorr said. "It is important that people have counsel when basic human rights are at stake, especially housing."

Schorr said while most landlords and property managers have lawyers, most renters do not. Limited funding in Mecklenburg County already helps keep some renters in their homes and in turn, helps them avoid long-term credit problems, but Schorr said with more funding, the Charlotte Center for Legal Advocacy could hire more attorneys and help far more people.

"There's a huge difference in results (when people are represented)," he said. "The landlords negotiate settlements because they know if they litigate them, they'll lose a lot of them."

Sayra Santos has already benefited from free representation. Santos, who works in the housekeeping business, said her job just restarted in December with fewer hours, which has again put her behind on rent. However, since she has access to an attorney, she said she knows she has a much better shot at avoiding eviction when the federal eviction moratorium ends.

"I feel secure," Santos said with the help of a translator. "It means a lot to me. During the first eviction process, they were able to get it dismissed. I am not alone and the attorneys know how to guide me and get me through this process. I don't know, but they do."

Santos is married with two children (2 and 13).

"If I'm evicted, my family doesn't have anywhere to go," she said.

She said without the help of an attorney, she would already likely be homeless.

"I think I might not have even gone to court," Santos said. "I might just have left the apartment without saying anything."

"It's everywhere," he said. "All over the country. It's in the Midwest, it's on the coast, it's in the South. This is a movement that's just really taken hold and become a mainstream concept."

Pollock said while South Carolina has pending legislation, the organization has discussed the idea with people in North Carolina too. He points to multiple studies that show that investment on the front-end can save taxpayers money.

"There are studies that have shown that it will save money to have a "right to counsel,'" Pollock said. "Spending the money once someone has become homeless and dealing with all the services that are needed is less much effective than preventing homelessness in the first place.".

The Charlotte Center for Legal Advocacy said free representation doesn't just help keep someone housed, it connects them with other public services.

Santos said her free attorney has made all the difference so far. She hopes others can benefit too.

"I felt anguish. I didn't know who to ask for help. I didn't even know what to do," she said of her emotional state before securing a lawyer. "It's definitely worth it, because an attorney will have your back."

The Greater Charlotte Apartment Association said the organization's board has not "formulated an official position yet."

WCNC-TV is part of six major media companies and other local institutions producing I Can’t Afford to Live Here, a collaborative reporting project focused on solutions to the affordable housing crisis in Charlotte. It is a project of the Charlotte Journalism Collaborative, which is supported by the Local Media Project, an initiative launched by the Solutions Journalism Network with support from the Knight Foundation to strengthen and reinvigorate local media ecosystems. See all of our reporting at charlottejournalism.org.