Despite the threat of fines, some continue to file campaign finance reports late. Big-name campaigns pledged to file their reports after WCNC Charlotte's questions. 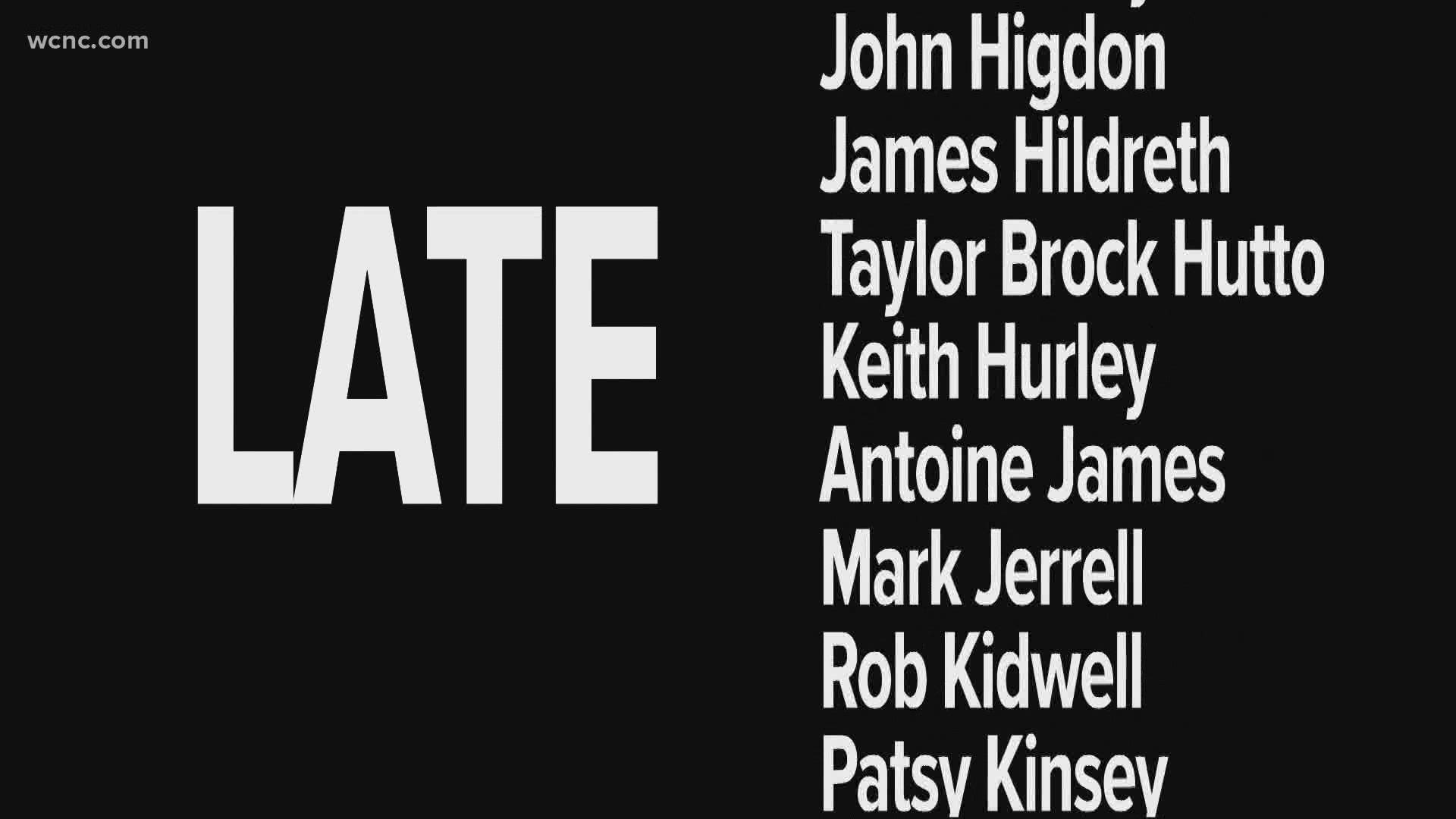 CHARLOTTE, N.C. — Some of the most recognizable political campaigns in North Carolina failed to meet deadlines to disclose who donated to their cause and how they spent that money, according to a WCNC Charlotte analysis of state and county campaign finance data. Hundreds of those campaigns now owe hefty state fines as a result.

State records show the North Carolina State Board of Elections has already assessed a combined $330,000 in penalties to campaigns this year alone for filing their 2020 routine campaign finance paperwork late or failing to file their 2020 reports altogether.

"The records for the Governor's state campaign committee indicate that a report was submitted on time, but the administrator for that committee is working with the State Board of Elections to try to resolve any communications mix-ups that could have occurred," the advisor said.

"I failed to do this … especially since this was all done during COVID in 2020..." Roger Wolfe told WCNC Charlotte. "...I didn't realize we would be fined based on the postmark of the cover sheet past the due date of the report."

NCSBE records show the state is penalizing the Committee to Elect Dimple Ajmera, connected to the Charlotte City Council member's failed run for state treasurer, a combined $1,000 for two late reports in 2020. NCSBE reports the committee's third- and fourth-quarter reports were each two days late. Ajmera's treasurer said the campaign found out about the fine from WCNC Charlotte.

"We were not aware of any issues with our campaign finance reports and recently completed a successful compliance review without indication of any fines," treasurer Denytra Logan Whitner said. "We have reached out to the NCSBE for information concerning this very confusing matter and we are awaiting their response."

NCSBE Public Information Director Patrick Gannon told WCNC Charlotte the agency mailed a notice of penalty assessment for the late reports to the committee on Aug. 19. However, Gannon said that notice incorrectly listed the penalty at $200. He confirmed the committee's fine will be $1,000.

"This was an administrative error in the processing of the invoice..." Gannon said. "...A corrected invoice will be sent to the committee. However, any notice of penalty assessment must be properly served. Until the existing invoice is rescinded and a new invoice is properly served, the committee's outstanding balance is $200."

Bishop For Congress also learned of $1,000 in state fines for two 2020 late reports from WCNC Charlotte. NCSBE confirmed a mistake by the state resulted in Congressman Dan Bishop's campaign never receiving notice of his penalties.

The Bishop campaign, meanwhile, reported its treasurer addressed the oversight long before the state assessed penalties.

"These transactions were filed accurately with the FEC but not with the state," the congressman's campaign told WCNC Charlotte. "Our new treasurer found the mistakes last year and corrected the filings immediately."

Of seven notable state campaigns identified by WCNC Charlotte that received NCSBE fines, Gannon said only the Carla Cunningham Campaign Committee had paid its penalty. Rep. Cunningham, who serves as her own treasurer, told WCNC Charlotte her $50 fine was the result of filing an electronic copy of her report a day late.

"I sent the hard copy, but failed to send the electronic copy," she told WCNC Charlotte. "I paid (the fine)."

Mecklenburg County Board of Elections records show other local campaigns could face penalties in the future for failing to file timely reports in 2021. Following WCNC Charlotte's questions, several pledged to file their most recent campaign finance reports, which were due July 30, including the campaign of Charlotte Mayor Vi Lyles.

"The 2021 Semi Annual report will be filed before the close of business this week," Lyles committee treasurer Conen Morgan told WCNC Charlotte before filing the report on Aug. 27. "This was an omission error on my firm's part and we apologize for the delay."

"The reporting deadline was missed as an error..." Morgan told WCNC Charlotte on Aug. 26. "...We will have it corrected this week. I am unsure as to what exact fines may be levied. The State Board will send out written communications should a fine be levied. We are prepared to follow the law as required and will pay a penalty should one be accessed."

Mecklenburg County Commission Chairman George Dunlap also failed to file a report before the July 30 deadline, according to county records.

"I was unaware that the report was due," he told WCNC Charlotte after filing the report on Aug. 30. "I learned that from your request. The report has since been filed. There has been three expenditures since my last filing."

Charlotte-Mecklenburg Schools Board of Education Vice Chair Thelma Byers-Bailey said she will eventually file her paperwork "and pay the penalty."

"I realize that my report is really late," she said. "Every time I reminded myself to stop and get it done, something else would erupt. The reminder letter that the Board of Elections sends out goes to a post office box that is monitored by one of my campaign workers. She has been ill recently and probably has not been picking up the mail. This is no excuse on my part because I did remember it needed to be filed. That's the long and short of my lapse. I will get it filed and pay the penalty."

"Report will be filed tomorrow morning," he told WCNC Charlotte a day before filing his report on Aug. 27.

Huntersville Mayor John Aneralla's treasurer said he didn't file his report, because the mayor is not running for re-election, but said he expects to file the report in the near future.

"I didn't file it," Michael Kolb said. "Usually they send a thing to your post office to file it and we didn't get one this year and he's not running ... I should have caught on."

Other campaigns said they too didn't receive notices, but Mecklenburg County Board of Elections spokesperson Kristin Mavromatis said the agency sent reminders.

"We sent a letter advising a report is due," she said. "We also send a postcard five days after the report is due if not received."

"It was just a miss," Jerrell said. "I thought it was sent out and it actually wasn't. I think they will assess a fine. I don't have an excuse for it. It shouldn't be late. No excuses. I just need to get it done on time and I didn't. I just need to keep it on my radar."

"I definitely turned them in," Phillips said. "I've been super diligent in getting these done."

"It's not working 100%," he said of the reporting system. "I'm not satisfied until I get everybody reporting. If there's one name, it's one too many. Let's get them in here."

Dickerson suspects most of the late filings are the result of oversights by campaign treasurers. However, he said he forwards the late filers' information to NCSBE for potential fines. According to Dickerson, local committees face maximum fines of up to $500, while state campaigns risk penalties of up to a maximum of $10,000.

"We try to make sure everybody files," Dickerson said. "It's [the] rules. That's why it matters."

"It just creates a lot of noise in the system and makes it really complicated to unravel campaign finance puzzles, especially as we get closer and closer to elections," he said.

Fuller said the fines could be especially damaging to local campaigns. Records show the state fined a handful of campaigns in Stanly and one in Catawba a combined $2,400.

"It tells me that a lot of (state) campaigns might rather take the fine than pay attention to their campaign finance filings," Fuller said. "The rules are relatively simple and experienced campaigns know how the rules operate. It's hard to say why some are missing the deadlines."

Records show the total penalties would be even higher if the state didn't waive fines for qualifying committees' first late report in an election cycle. The databases show more than $96,000 in penalty waivers tied to 2020 late reports.

Gannon said the State Board "may waive a civil penalty in whole or in part if it determines there is good cause for the waiver."