U.S. Immigration and Customs Enforcement said six of the arrests were criminals with active ICE detainers that were released back into the community. 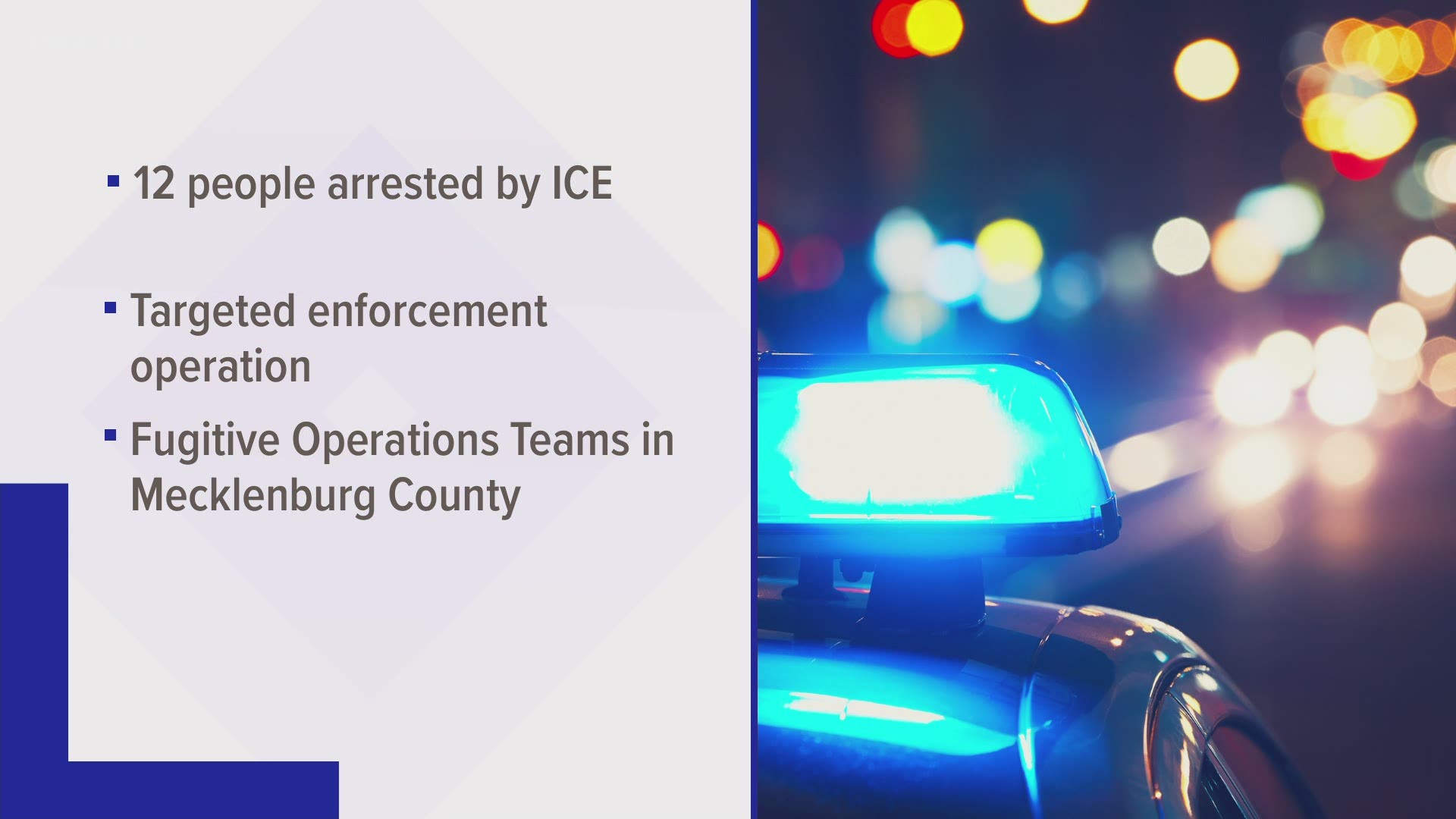 ICE's Fugitive Operations Teams worked on the operation in Mecklenburg County from September 21 to 25.

Of the 12 arrests, six included criminals with active ICE detainers who had been released into the community instead of transferred into federal custody.

According to a press release, ICE has repeatedly asked jurisdictions to reconsider any non-cooperation policies, saying "those policies put politics before public safety and release criminals back into communities where they are free to reoffend."

McFadden is an outspoken critic of the ICE detainers.

"I was elected with a clear mandate to stop honoring voluntary ICE detainers," McFadden previously said.

ICE said in a release that cooperation with law enforcement is "essential to protecting public safety," but that Mecklenburg County is among those that has not assisted ICE in its efforts.

“We are here because we cannot stand by idly while knowing the public is being misled about the role ICE plays in keeping the public safe,” ICE Executive Associate Director Henry Lucero said in a statement. “The fact is local policies prohibiting agencies from working with ICE put you in danger and waste police resources. The public should hold its leaders accountable and demand to know what type of criminals are being released from local custody instead of turned over to ICE.”

Jose Ruiz-Quintero was arrested by MCSO June 15 and has criminal charges of assault with a deadly weapon inflicting serious bodily injuries. ICE issued a detainer on June 16. After Ruiz-Quintero was released from custody on June 16, ICE found and arrested him on September 23.

According to ICE, Ruiz-Quintero is Nicaraguan, illegally present in the United States. He was ordered to leave by an immigration judge on August 1, 2019.

According to ICE, Amador-Lopez is Guatemalan, illegally present in the United States. He was ordered to leave by an immigration judge in March and April of 2014.

Emmanuel Guillen-Gonzalez was arrested by MCSO on July 21, facing criminal charges of breaking and entering as well as larceny. ICE issued a detainer on July 21. According to ICE, he was released from custody on July 21, and ICE found and arrested him on September 22.

According to ICE, Guillen-Gonzalez is Nicaraguan, illegally present in the United States. He was ordered to leave by an immigration judge on March 29, 2018.

ICE said that Mecklenburg County's non-cooperation policy since 2019 has caused ICE to have to find people after they have been released into the community, potentially allowing them time to commit "additional preventable crimes."

"Despite the challenges this policy creates, ICE remains committed to enforcing federal law, and residents should continue to expect a more visible ICE presence in Charlotte while this non-cooperation policy remains in effect, as ICE has no choice but to conduct more at-large arrests in local neighborhoods and at worksites, which will inevitably result in additional collateral arrests instead of arrests at the jail where enforcement is safer for everyone involved," a statement from ICE reads.

The full release from ICE can be found here.