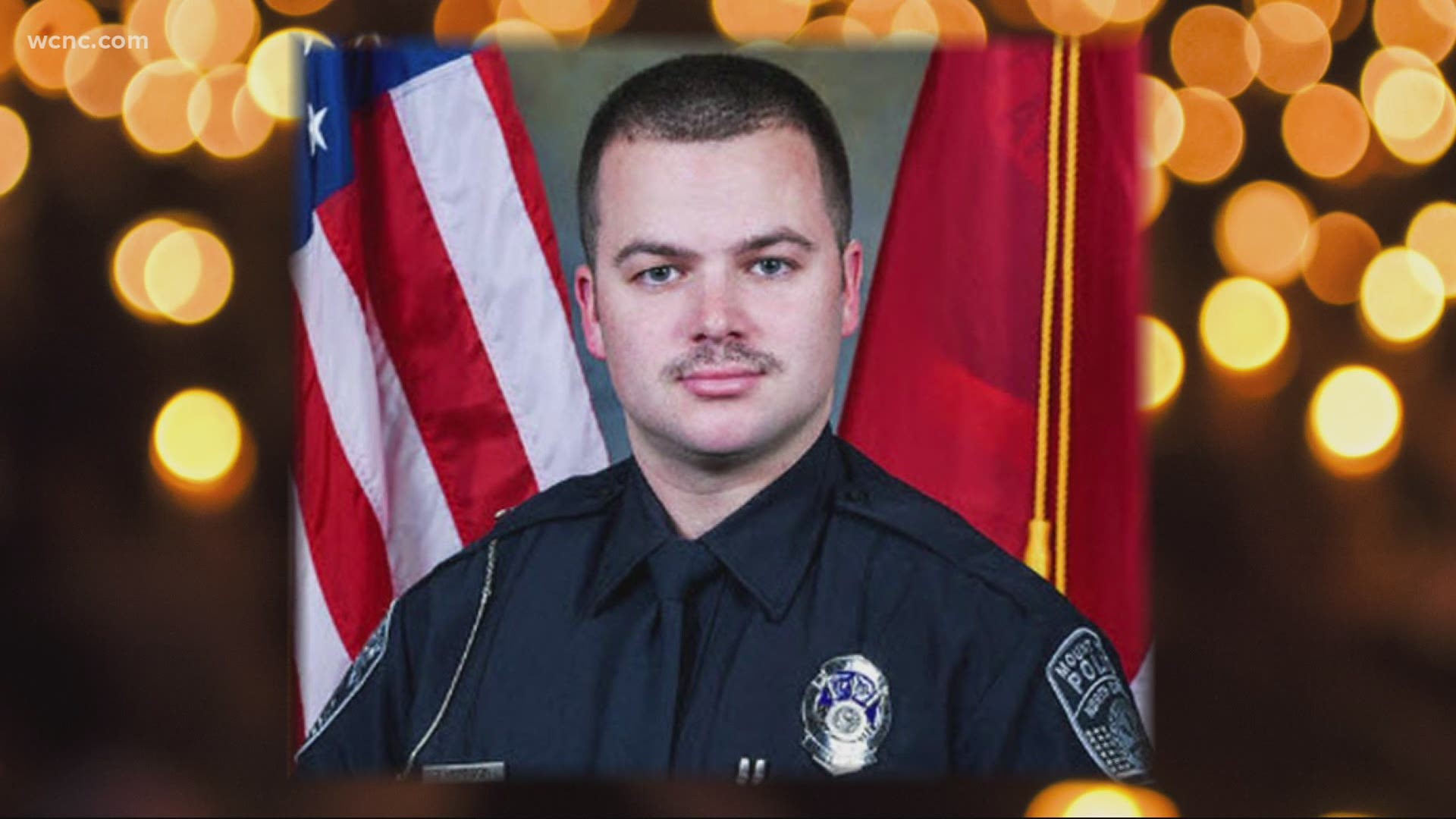 MOUNT HOLLY, N.C. — A family and a community are mourning after losing a Mount Holly police officer who was killed in the line of duty Friday morning. His family is both shocked and torn, according to his cousins.

"Our family is just torn," said Heather Campbell, a cousin of Officer Tyler Herndon, who was shot while responding to a break-in call.

"He had a great future ahead of him. We really expected him to, probably before too long, to be proposing to his girlfriend and actually getting to have his own family," Campbell said, overcome with tears. "And that boy took it from him, and I'm so mad at him for that."

Joshua Tyler Funk, 24, was taken into custody and charged with first-degree murder.

Funk got in a shootout with police after they responded to an active break-in at the Mount Holly Car Wash just before 3:30 a.m. Friday.

Herndon was rushed to CaroMont Regional Hospital where he later died.

"I mean he was just tremendous. It was a life gone too soon," said Amanda Phillips, another cousin of Herndon, as she wiped tears out of her eyes.

Campbell said Herndon wanted to be an FBI agent, working his way up to the prestigious job.

TONIGHT AT 11:
Hear from Officer Tyler Herndon’s family as they lean on the community to get them through their tragic loss.

Herndon was killed in the line of duty this morning in Mount Holly. @wcnc pic.twitter.com/p25BBvREtW

"I mean he went to school and they told him he had to be a police officer for two years," she said. "And he was almost there. He almost made it."

The 25-year-old was supposed to be celebrating his 26th birthday on Sunday along with his twin sister.

His family is left planning his funeral as the community wraps them in their arms.

Before those in mount holly went home for the night on Friday, dozens brought flowers to show their respects for an officer who never made it home.

Bouquets were draped over Herndon's patrol car outside the police station, in a moving tribute to the officer who was thrilled to serve the community, Phillips said.

"This is just a sad loss," said Wanda Crawford, a resident who showed up to show her respects.

"They go to work, they leave their family at home. And it's just so sad that there's so much evil in the world. It just doesn't make sense," Ewing added as she started to cry.

Those he served made sure Herndon's colleagues knew they matter, too.

"To let our law enforcement officers know that they are loved in our community, we embrace them," Crawford added.

His family is thankful for the outpour of support.

"It's truly appreciated," Campbell said. "Cause our family truly needs it right now."