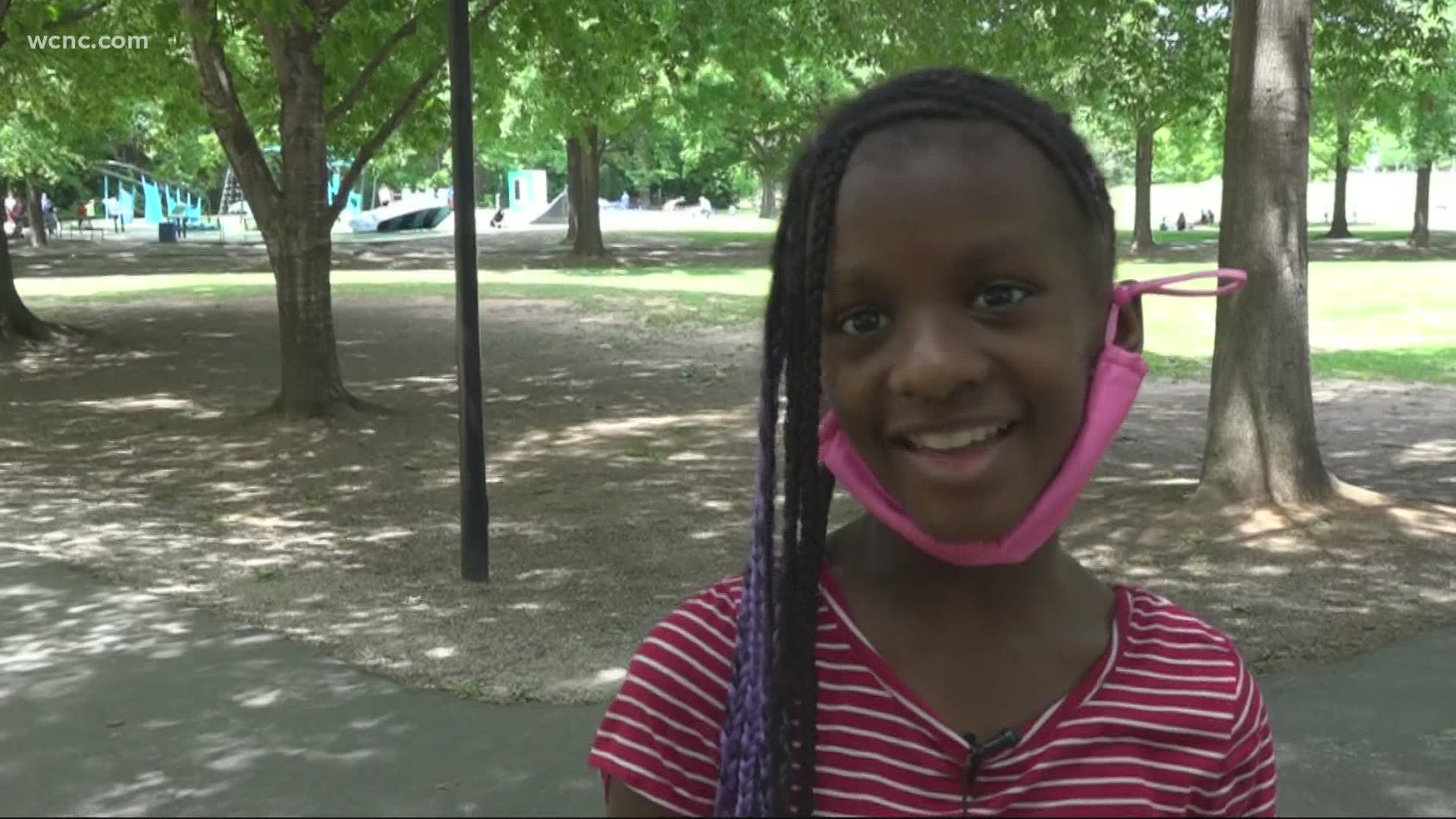 RALEIGH, N.C. — North Carolina is one step closer to normalcy as of 5 p.m. on Friday.

Gov. Roy Cooper lifted part of the state's mask mandate that required face coverings in certain outdoor situations. However, masks will still be recommended outdoors in crowded settings when social distancing is difficult.

"The pandemic is not over," North Carolina Governor Roy Cooper reminded everyone on Thursday while outlining his intended timeline to peel back layers of COVID-19 restrictions heading into summer. 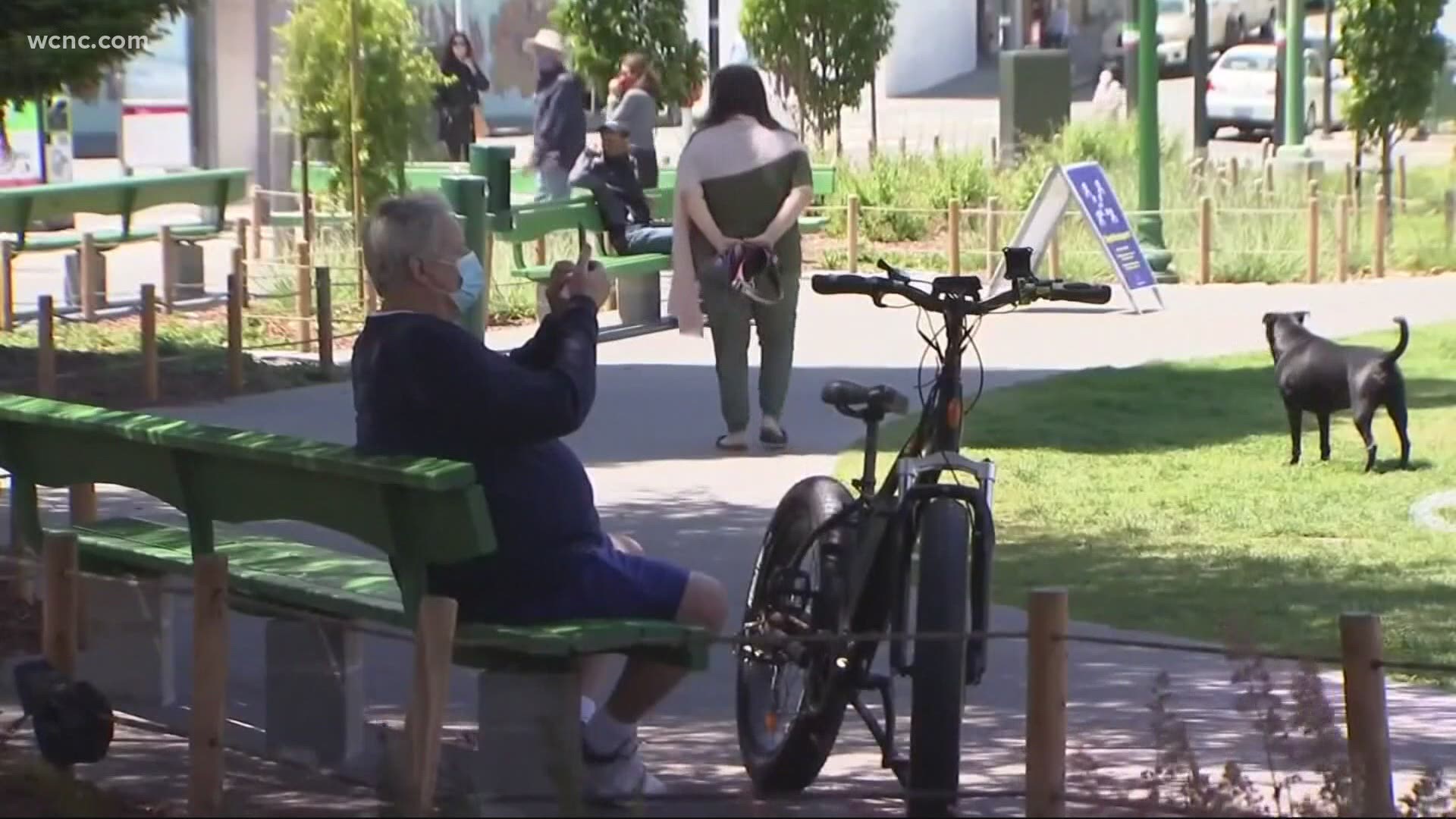 Cooper's change brings the state's mandate closer in line with new guidance released Tuesday by the Centers for Disease Control and Prevention.

The new guidelines outlined how groups of vaccinated people gathering outdoors could safely remove their masks. The CDC did still encourage mask-wearing outdoors whenever gathering with those not vaccinated or with crowds of people whose vaccination status may be unknown.

RELATED: CDC says many Americans can now go outside without a mask

"For our unvaccinated population, children or adults, we continue to recommend wearing masks," Cohen said, noting there is currently no vaccine for anyone 15 years of age or younger and that group remains unprotected for now.

Also on Friday, the state will loosen mass gathering limitations, increasing indoor limits to 100 people and outdoor limits to 200. Those limitations would not apply to gatherings at restaurants, bars, professional sporting events, and other venues.

Then, once two-thirds of adults in North Carolina have received at least one dose of COVID-19 vaccine, he intends to remove the indoor mask mandate.

According to NCDHHS data, almost 40% of adults statewide were fully vaccinated Wednesday. Close to half of the adult population was at least partially vaccinated, putting the state about three-quarters of the way to its two-thirds vaccination goal.

Someone is considered fully vaccinated two weeks after receiving either their second Moderna or Pfizer shot, or their single Johnson and Johnson shot.

"Let's work hard in May to get as many people vaccinated as possible," Cooper said Wednesday. "We need everybody to step up."

Whether the state can reach its vaccination goal remains to be seen. The rate of people getting vaccinated has slowed, NCDHHS data shows. The state's vaccination dashboard shows total weekly vaccinations have dropped off over the last two weeks, with last week's count being the lowest since mid-February.

Some vaccine providers have attributed part of the slump to the temporary pause on Johnson and Johnson's one-shot vaccine, which has since been restarted. Health officials have also noted sluggish vaccine uptake amongst younger age groups as a concern.

But those officials and vaccine providers have found new ways to reach people, including recent vaccination clinics held at private businesses, such as breweries in Charlotte's South End neighborhood.

RELATED: Reaching people where they are: Vaccinations at breweries.

The lifting of the indoor mask mandate also depends on the state's COVID-19 metrics remaining stable, Cooper said. So far, data shows cases, percent positive and hospitalizations have largely done so since March.

Of the four key metrics, hospitalizations have been showing the most rises lately, with 1,117 people getting coronavirus treatment Wednesday.

NC COVID UPDATE: After a brief rise in COVID cases and percent positive, we are starting to see more of a leveling trend return. Hospitalizations are still increasing. @wcnc pic.twitter.com/uOcoTSLJB0

"Enforcing the mask mandate has been certainly a challenge,” Jamaar Valentine, the general manager of Noda Brewing Company, said.

Valentine said the establishment has tried to follow the mandate religiously.

“I know a lot of other breweries have had to throw their hands up in the air; our team is pretty vigilant,” Valentine said.

Valentine said the removal of the outdoor mask mandate has been a long time coming.

“All this time, we’ve just been trying to push through to the point we don’t have to worry about wearing masks anymore,” Valentine said.

The change is also welcome news for vendors at the new farmers market at Camp North End.

Jzar said the more people stopping by the market, the better, and it should be easier to sell without the masks.

“You can’t see smiles; you can’t get a connection with people,” Jzar said.

For Jzar, the change is a sign the state is moving in the right direction, and he remains hopeful for a full return back to normalcy.

“Just getting back to where we can have samples,” Jzar said. “For me, having samples is a thing. Just letting people be able to taste and touch and pick and so I look forward to that.” 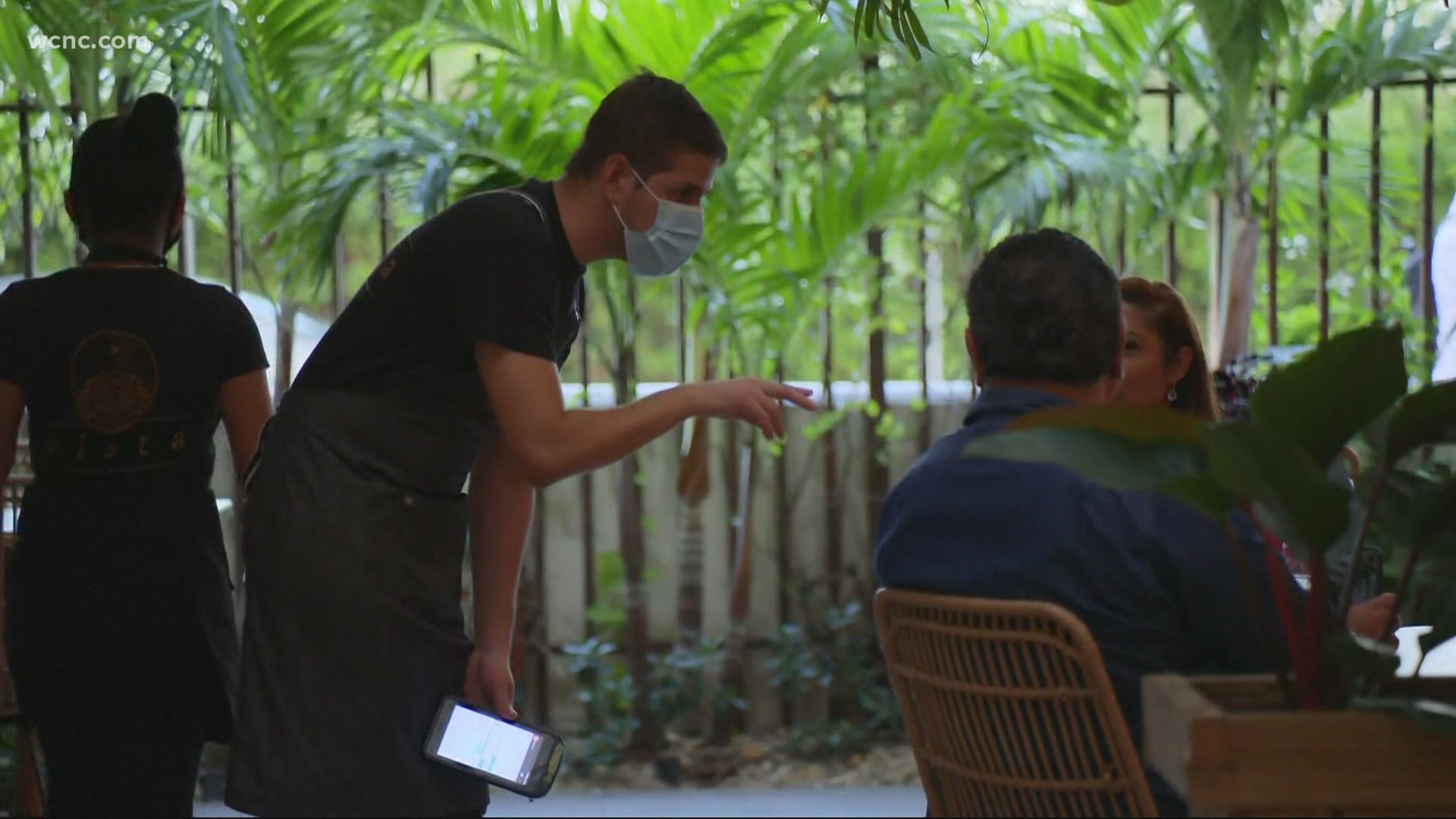 Catawba Brewing Company’s Charlotte location has also been following the social distancing and capacity limits for months, with a goal of keeping everyone safe and keeping staff on the job.

“Obviously, the customers and my staff–that’s my number one priority is the staff,” taproom manager Jameson France said. “If anybody gets sick, we got to shut down. Nobody’s making money.”

The brewery is hopeful about the future, with the state planning to lift social distancing and capacity limits on June 1.

It even plans to host a vaccine clinic with Mecklenburg County Public Health from 3 p.m. to 7 p.m. on May 7. The vaccine is free, and according to a post on the brewery’s Facebook page, the establishment will also offer a $5 gift certificate to anyone 21 and up that receives a vaccination there.

“Come out and be part of the solution,” France said. “Then, we can open back up again, and then, we all can get back to normal.”

France said the brewery has tried to do its part in the entire pandemic to fight COVID-19 by following the protocols, and the vaccine clinic is an extension of those efforts.

“We want to offer a site that our customers can come to with ease that will target a little bit of the younger generation, which I think they’re trying to go for,” said France. 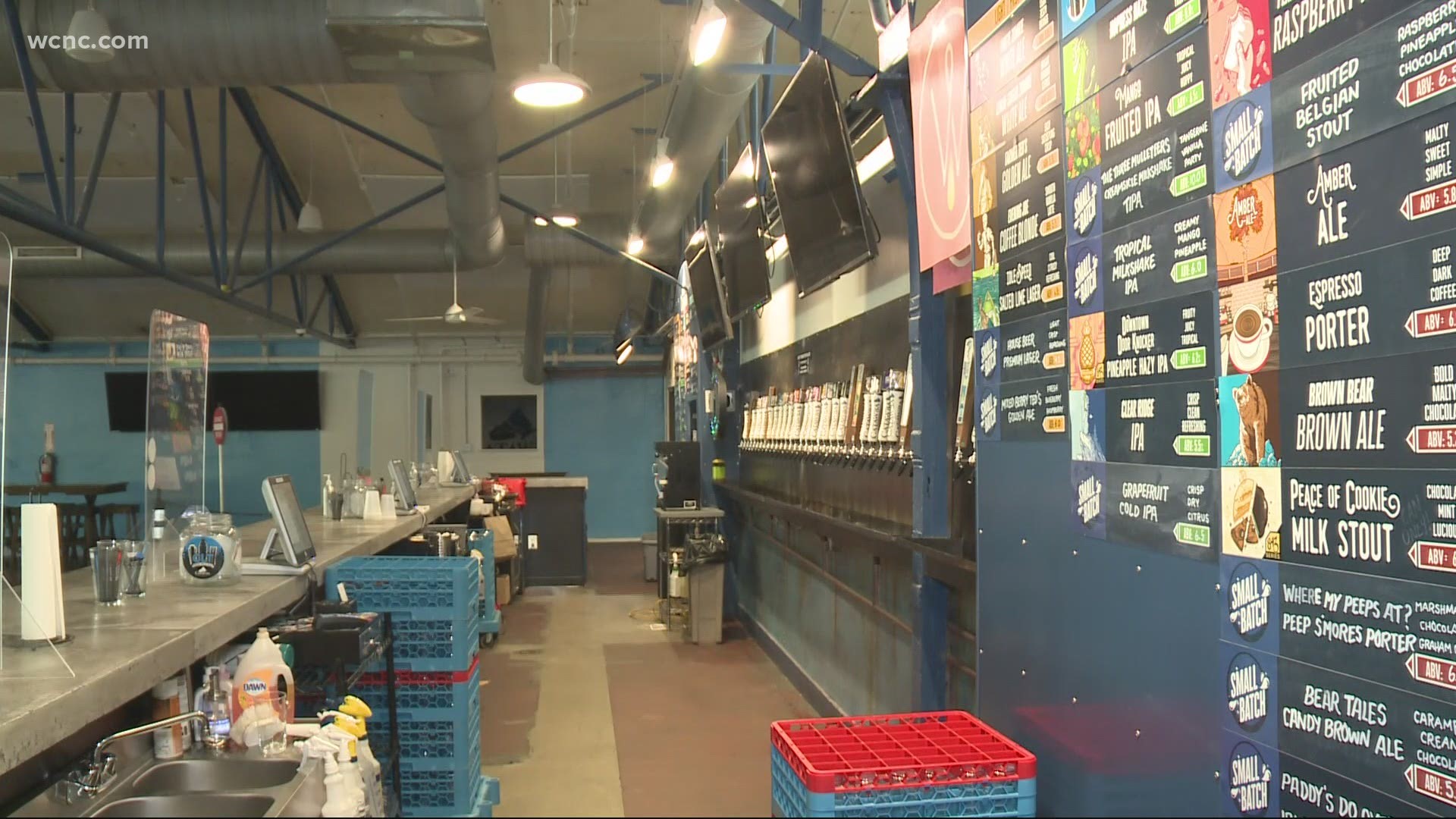 The state's change is also welcome for the NoDa Company Store. Its patio is an oasis in the middle of north Charlotte where the neighborhood can gather, but lately, the gatherings have had to be limited and spaced six feet apart.

“We never had it packed wall-to-wall to begin with, but we also never had to say, ‘You guys can stand here and when two people leave, you can come in,’” one of the owners Scott Lindsley said. “And, you know, we really were set up for people to meet each other.”

The other owner, Joey Hewell, usually likes to plan events, such as a Halloween party and a prom, but those had to be put off in the last year due to the pandemic.

The owners said they are hopeful they can start planning these events again as restrictions continued to be eased.

“At this point, it’s been a year and a half almost,” said Hewell. “I think just any sort of progress in the right direction is what we’re looking for.”

Hewell and Lindsley said they have been letting the experts guide their business decisions throughout the pandemic and would loosen up their mask policy outside based on the recommendations from experts.

“I mean can you imagine ... how weird it’s going to be to see people’s faces again,” said Hewell. “I mean, the people I’ve met in the last year, I don’t know that I’ll recognize them after this. I’ll know their eyes, but I will not know anything else.”

The owners are looking forward to the day they don’t have to turn people away, and people can mingle in larger groups at their establishment.

For now, they said they’re keeping the gatherings small to do their part in the pandemic.

“I hope we go to the point that, you know, that the capacity here polices itself by people looking and seeing if they want to join a crowd or don’t,” Lindsley said. 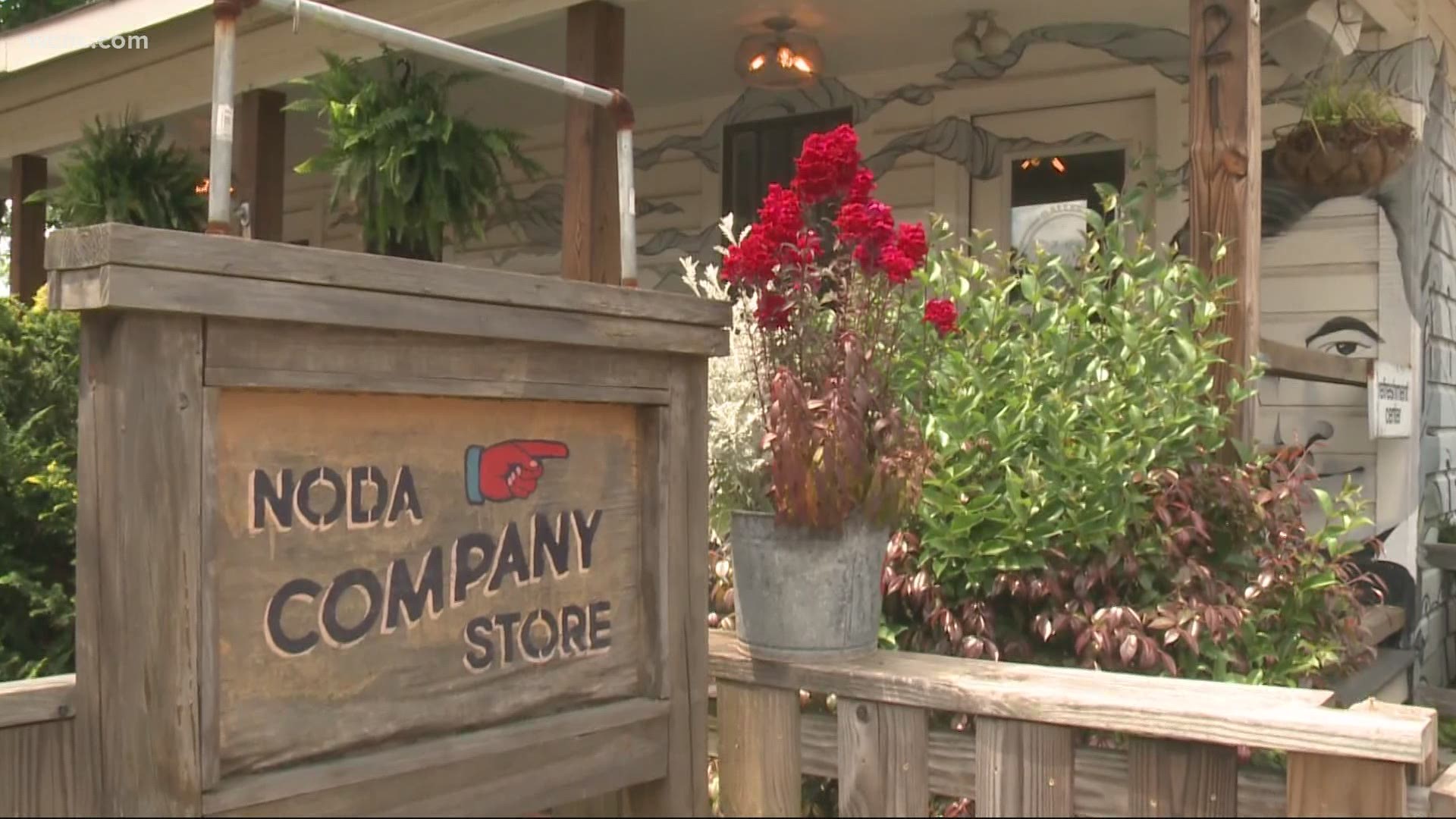 "I'm looking forward to running around freely without having to wear a mask," Chastity Patterson said.

At Freedom Park Friday afternoon after the mask mandate officially lifted, some people were still wearing masks while some were already without one.

"I don't usually wear a mask outdoors just because I feel like I can control my distance from people," Hayley Armstrong said.

Armstrong has had her first dose of the vaccine. She said after a year of COVID-19 regulations, fewer restrictions feels strange.

"It's crazy to think that it's already getting lifted, but it's nice to see," Armstrong said.

"I don't anticipate the mask mandate indoors being lifted soon," Mecklenburg County Health Director Gibbie Harris said. "I think our numbers are still high enough at this point where that needs to be in place, again we just need people to step up."

"I've been waiting for this moment," Bates said. "I'm an avid walker, and it is very hard when you walk at a brisk speed with a mask, now we can relax and walk." 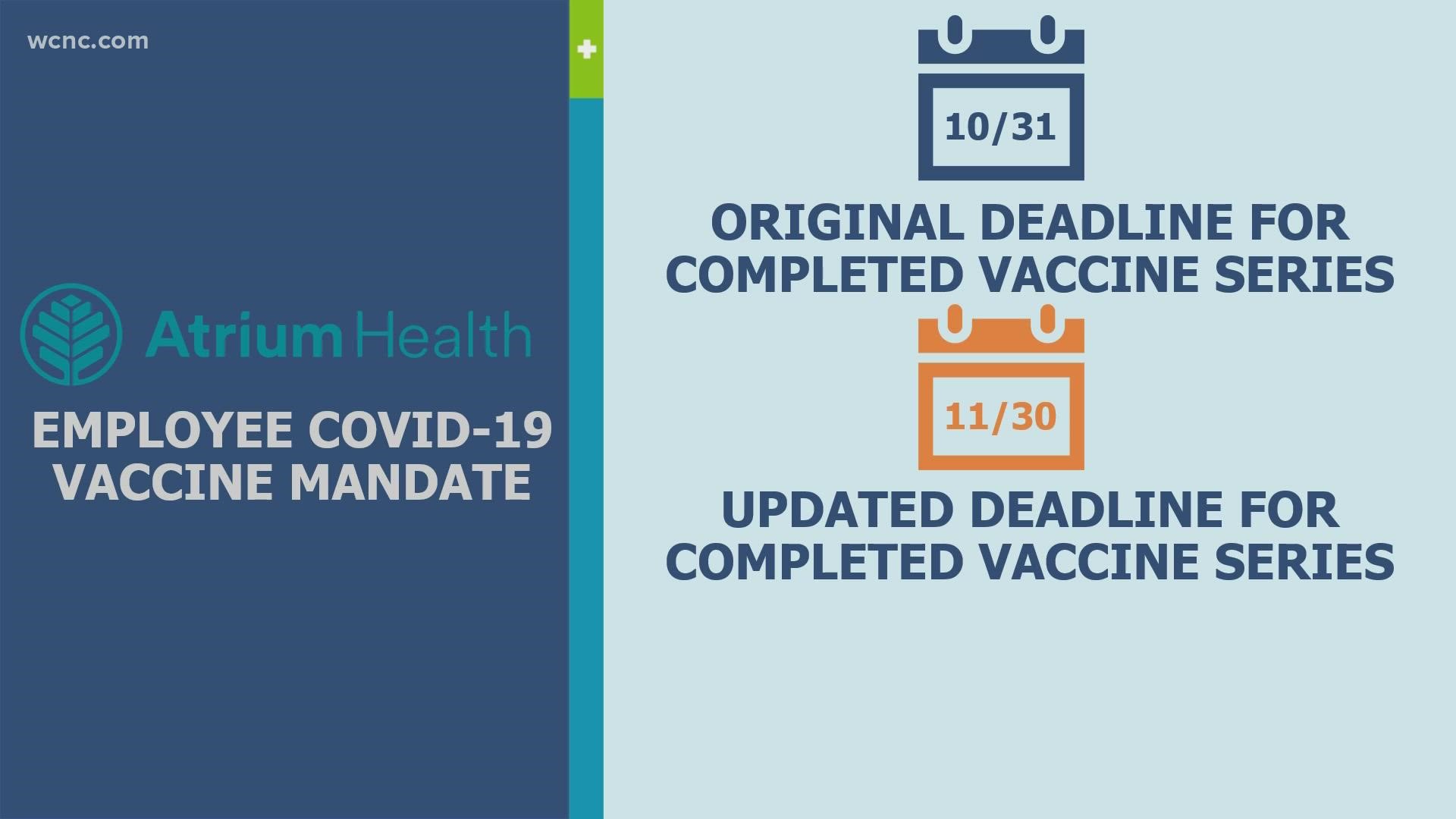