McMaster says while doesn't know when things will get fully back to normal, he does see a turning point soon. 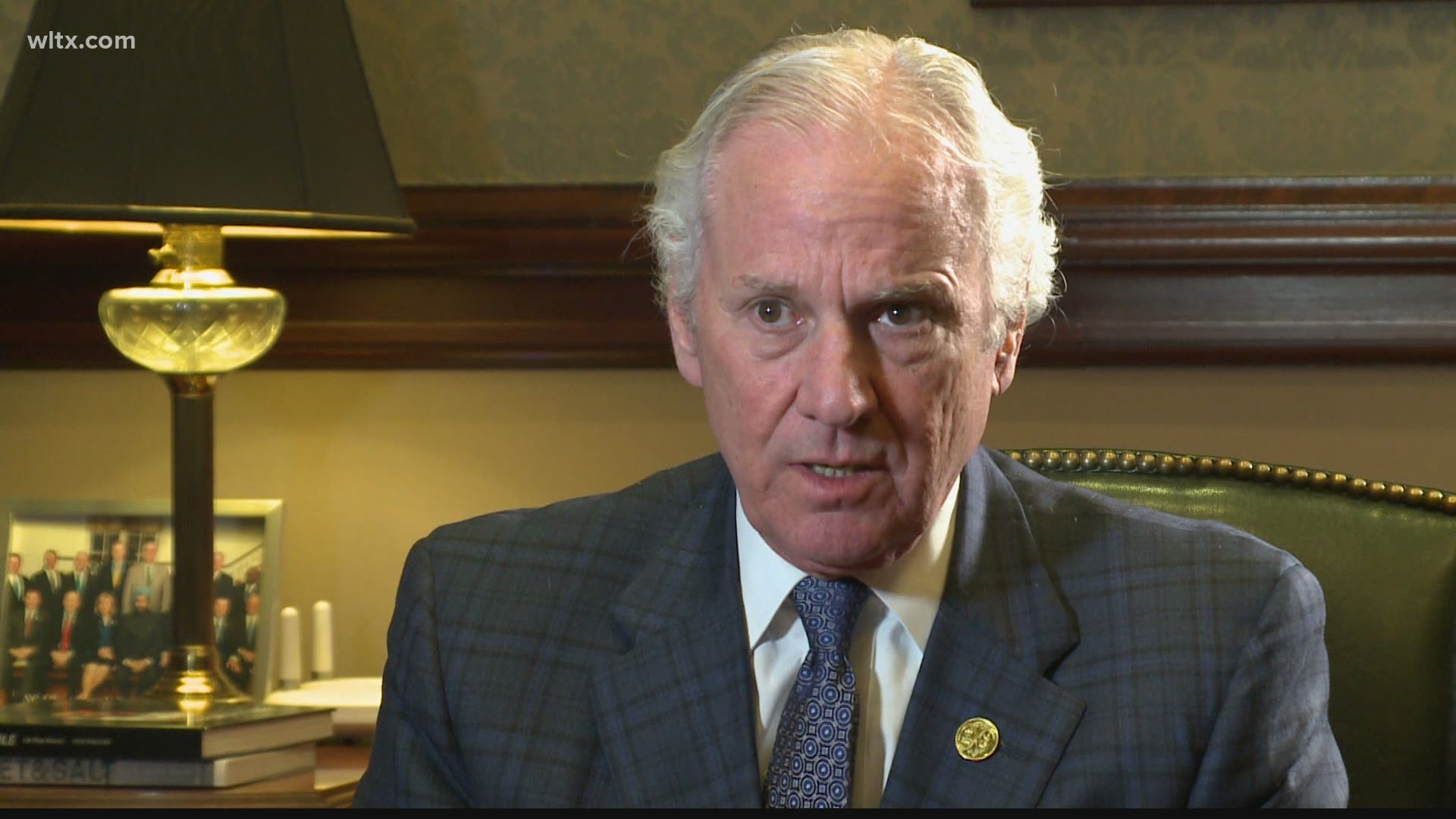 COLUMBIA, S.C. — South Carolina Gov. Henry McMaster says his decision to hold off vaccinating teachers for now is the ethical thing to do, given the high risk of the virus to seniors. And he says while he doesn't know when things will get fully back to normal, he does see a turning point soon.

McMaster said down with News19's J.R. Berry for a one-on-one interview. They discussed the decisions and difficulties rollout the vaccine. And they discussed his decision to keep vaccinating seniors and holding off on vaccinating anyone else for now.

"We have a limited supply of the vaccines and our priority is to give those vaccines to the places where they'll do the most good," he said. "What ethics and morality calls for is to protect our senior citizens who are the one who are at most danger and high risk of getting the disease and dying. The average age of people who have died in our state is 75 years old. Over 88 percent of the people who have died are 61 or older. If we take younger, healthy people and put them in front  of our seniors then we are depriving the people who may die from the disease of that protection and giving it to someone is not going to die and might not even get sick. That is the wrong way to go and we're not going to do that in South Carolina."

The director of the CDC said last week that vaccinating teachers is not a requirement for opening schools, so the governor says they can wait. And he says keeping kids out of the classroom is doing more harm than good.

"There's all sort of psychological damage to the children, sociological damage," he said. "They've missed things that are enormously important and for many of the parents that they're children are not in school the parents have to stay home. So there's double and triple unintended consequences and when you weigh those certainties against the doubt of getting transmitting the in the schools it's clear we should have been back in school a long time ago.

And the governor is not alone. State Education Superintendent Molly Spearman agrees.

RELATED: How to register for the COVID-19 vaccine in South Carolina if you're over 65+

"Teachers of course are in the very next group and we've asked all the districts to submit plans for how they can find out which ones want to be vaccinated when it would be available and as soon as the doses are available and we have those plans and the districts have a plan to get back to school we will be able to.

"Because they are an organized group we can move them in and move them through very quickly. But we need to have more supply now before we do that because we still have a lot of seniors out there who are at very high risk and we must get vaccinated."

If we allow teachers to jump the line, we are taking vaccines from our most vulnerable population who are dying from this virus. That is unethical, immoral, and absolutely unacceptable. pic.twitter.com/0j0GYRHCbA

McMaster also acknowledges there have been problems rolling out the vaccine to rural areas.

"There's not enough being done but we're doing all we can do so far vaccinating people in the rural areas and the urban areas," he said. "As you know we got off to a slow start because of some misunderstanding there were a lot of bottlenecks with the big hospitals and the smaller hospitals."

"We finally got those cleared up and some are operating at over 100 percent of the doses that they are receiving. They're getting it in those arms immediately that week which is what we asked them to do. But we have about 600 pharmacies in other places around and county health offices around in the counties that are waiting to be activated but they don't have the vaccine yet.

"We have about 300 and something of our pharmacies and places that have gotten the vaccine but they only got it a couple of weeks ago. So they are starting to vaccinate.  We have the National Guard involved we have pop up sites just as we did with testing. We've done a tremendous job of testing now if you look at that."

But that could take months to get everything straightened out. So how much longer does the governor think it will it be until society returns to normal.

"Well I know it's frustrating, all the various restrictions," he says. "Fortunately with good advice and counsel and leadership in our state we determined not to shut down like they did in other states. It wasn't necessary. Some other states shut as much as they possibly could. We shut only what we had to. But I think when we get the more vaccines as we were promised by the Trump Administration and promised by the Biden Administration consistently that in March we would see much more vaccine coming in. We have two kinds now, Pfizer and Moderna. We're looking for something from Jansen and Johnson & Johnson and maybe others. We think in March we'll have a lot of vaccine and we know by then that all of these pharmacies and all of these other outlets in the rural areas especially will have long been set up and just waiting a larger supply."

"So I would say we'll see some bright lights coming in March but to predict when it's going to end would be very difficult but I know it's going to get better."