Charlotte siblings say their dying mother was neglected in her final hours. They're now suing the nursing home she lived in

The siblings claim the nursing home didn't give the prescribed medication, and an investigation shows this wasn't an isolated incident. 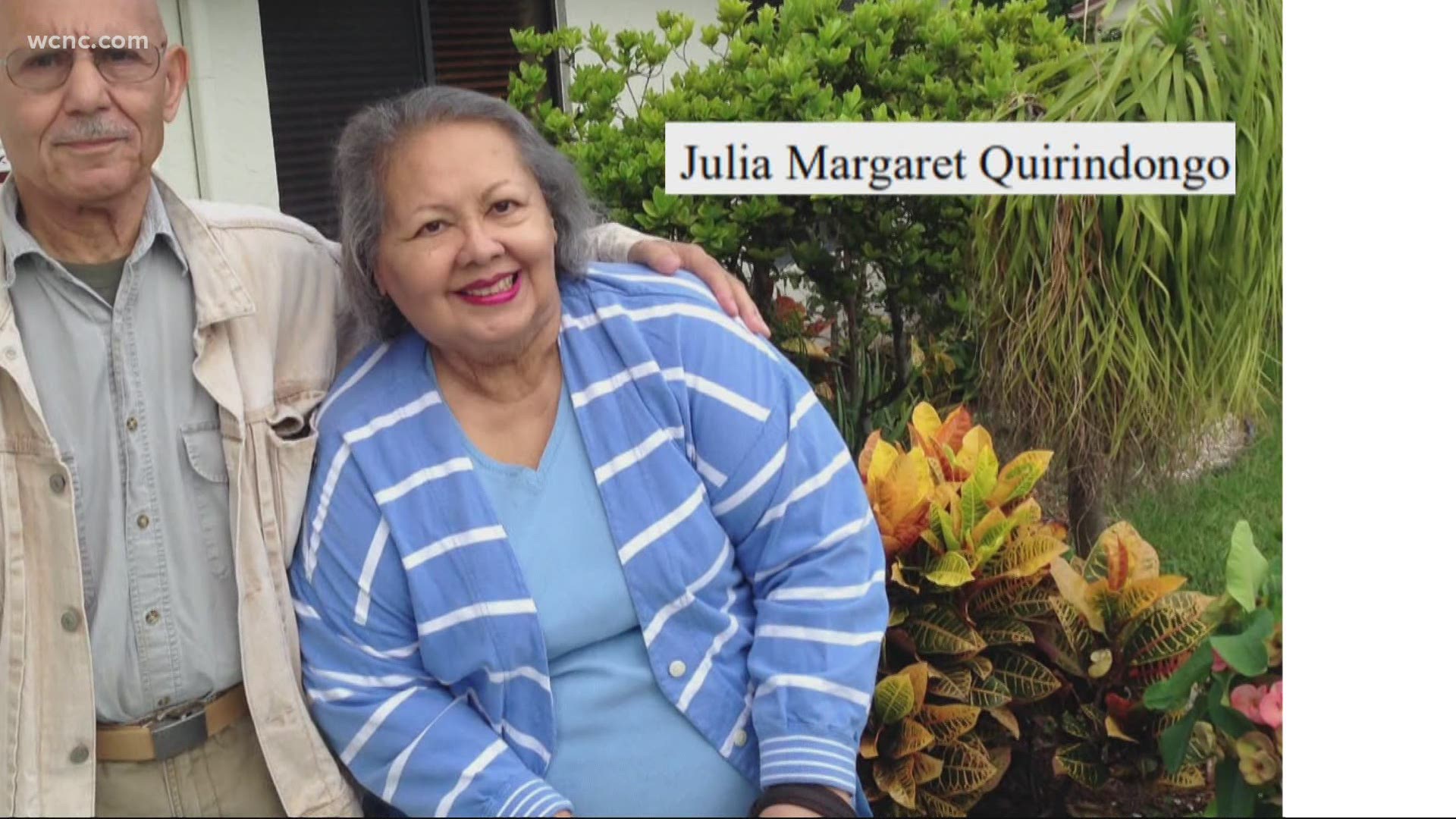 CHARLOTTE, N.C. — A Charlotte family is suing an area nursing home alleging their mother died in terrible pain because workers didn’t properly administer her medications -- and then tried to cover it up.

A Mecklenburg County investigation revealed this was not an isolated incident at the Brighton Gardens assisted living facility. But a special law giving nursing homes immunity during the pandemic could prevent the suit from going forward.

In the lawsuit, Ronnie Talent says his mother Julia Quirindongo drowned in her own secretions -- fluid allowed to build up -- after the team at Brighton Gardens nursing home allegedly didn’t properly administer the medication the 82-year-old was supposed to be getting in her final hours.

Julia Quirindongo was a feisty homemaker with a master's degree who raised two kids -– Ronnie and Lisa. She also had a host of health problems for much of her life.

"My father took care of her, was her caretaker for many years. My dad got sick a year before my mother did," Talent explained.

After Talent's father died, he and Lisa moved their mom to North Carolina, placing her at the Brighton Gardens assisted living facility in south Charlotte.

On Labor Day weekend in 2020, doctors told the siblings the end was near for their mother and they brought in hospice workers.

"Hospice told us they were going to update her medication to help her breathe and be more comfortable," Talent said.

Her children say they never left her bedside that final day.

"On the last day, we showed up in the afternoon – during the day they were very attentive. But after 5 o’clock we were there with her and all of a sudden as time went on, it was 11," Talent said. "Lisa and I looked at each other, where are they, we hadn’t seen anyone in hours. My mother's breathing was getting louder and louder and gurgling -- we could hear liquid bubbling up and she started moaning and thrashing and clawing at her neck."

The lawsuit alleges workers at Brighton Gardens didn’t give her the medication prescribed meant to control this – saying “the staff failed to provide her with care.”

Lisa Noguera, Talent's sister, said "It’s a memory I wish I didn’t have, of my mother looking at me pleading, reaching out and her eyes just getting bigger and bigger. It was a pretty helpless feeling and I'm angry I couldn’t do more and angry that’s how she had to leave. It was horrible, her eyes were bulging out and by the time the hospice nurse came in -- it was horrifying to witness."

WHERE'S THE MONEY: DMVs sold driver and vehicle records and made $172M as a result

The siblings say after no one at the facility would help their mom, they called the hospice nurse and asked her to come to the hospital. Together, the three say they confronted the nursing home medication aide.

"First thing hospice nurse asked: were you giving her her hourly medication," Noguera said. "Silence. She never checked the medications my dying mother was supposed to have. By the time we got back up to the room she was gone."

What happened to Julia Quirindongo was also not an isolated incident. According to a report obtained by WCNC Charlotte, a Mecklenburg County investigation found “the facility failed to administer medications” in three of five patient cases they looked into – including Julia’s case. The resulting state-issued Adult Care Home Corrective Action Report says because the facility did not administer her prescribed medications, Julia “endured pain and suffering demonstrated by gurgling and moaning and being fully awake and panicking in the last hours of life.”

The lawsuit alleges workers tried to cover this up, pointing out facility documentation shows staff administered medicine three times on the day she died: at 3 a.m., 3:15 a.m., and 3:17 a.m. But that was when Julia Quirindongo would have been unable to “swallow any medication” because she was “essentially dead.”  In a court filing, the facility denied these allegations.

She was officially pronounced dead at 3:20 a.m.

"The investigator found last doses of this pain medication were given 8/31; in other words, there was no medication to provide to Mrs.Quirindongo for a couple of days before her death," said Elizabeth Todd, the family's lawyer. "They didn’t even have it in-house at the facility and yet they’re documenting that they’re giving it to her."

We asked the nursing home for comment and received this statement in an email from their parent company Sunrise Senior Living:

We cannot comment on specific legal matters out of respect for the privacy of our residents and their families. As a general matter, however, we strive to provide the best possible care that we know our residents and families expect from us. We continue to work every day to earn their confidence and trust. We also take concerns about the care and safety of our residents very seriously and take prompt, appropriate action as needed.

Lawyers for the nursing home deny many of the claims in the lawsuit. They have moved to have the case dismissed in part citing a statute urgently enacted at the start of the pandemic. The nursing home contends this law grants them immunity for deaths during COVID-19 – even though attorneys for the family say Quirindongo’s death had nothing to do with the virus.

"My father took care of my mother for 59-plus years. When he died he trusted us to take care of her and we tried to get the best doctors, the best care, and because a staff member did not want to check her homework, what she was supposed to do to take care of a patient, my mother had a catastrophic death," Noguera said.

We've asked both Mecklenburg County and the state for an update on the investigation and both agencies are pointing the finger at the other to get us a response. WCNC Charlotte is continuing to work to get more answers.