Salisbury K9 Officer James Hampton resigned from his position after a viral video showed him appearing to roughly handle his canine, Zuul. 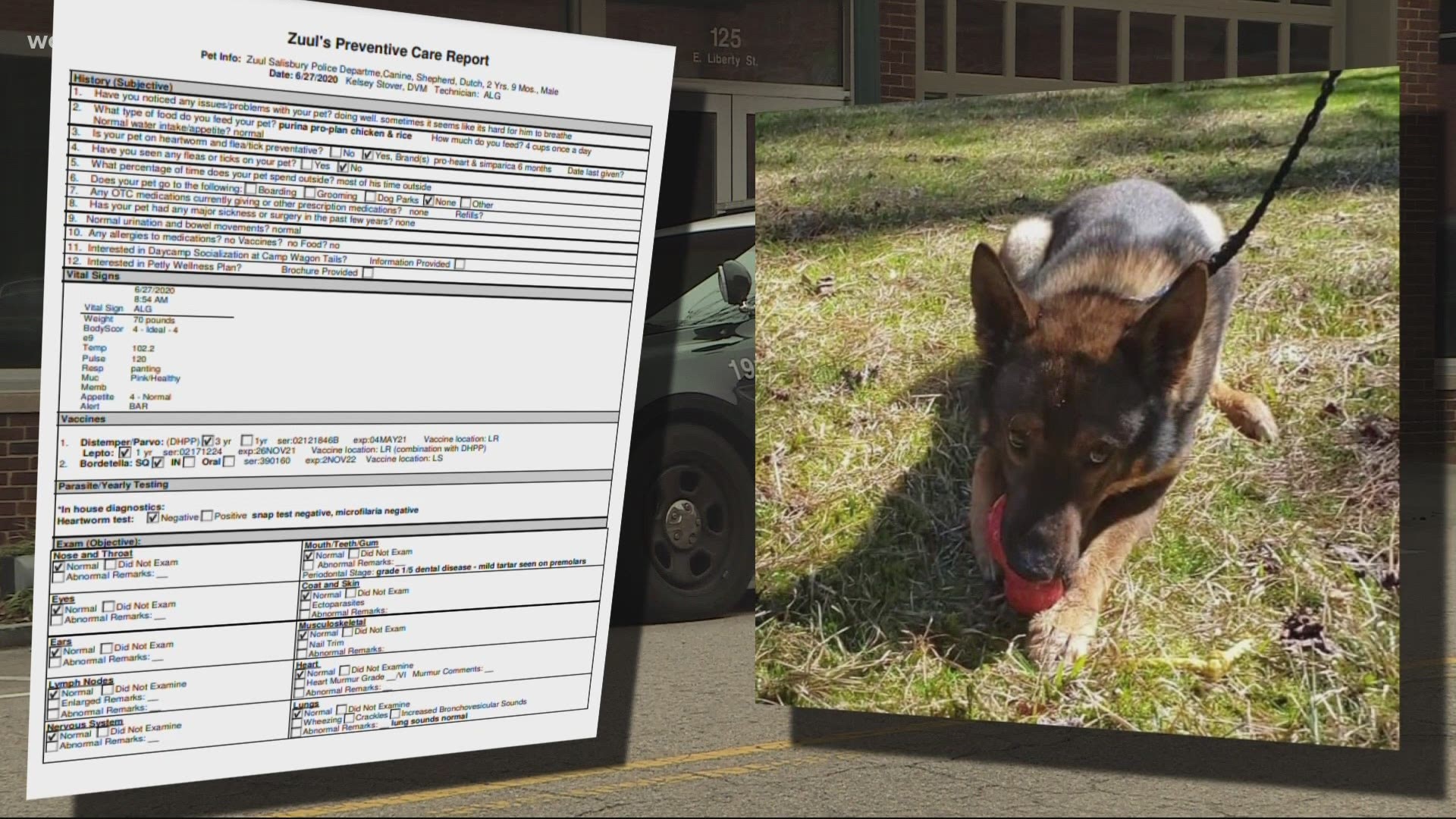 SALISBURY, N.C. — Veterinary documents obtained by WCNC Charlotte reveal new details about the medical history of Zuul, the Salisbury Police canine at the center of a controversial viral video.

In June 2020, an officer took Zuul to a local veterinary clinic for a check-up.

In the report, the officer said Zuul was doing well, but the officer indicated, "sometimes it seems like it's hard for him to breathe."

The veterinarian determined Zuul was in good health, and she suspected, "his shock collar was slightly too tight on his neck contributing to his harsher breathing especially when excited."

She wrote she loosened Zuul's collar a few notches.

The second visit happened two days after Zuul was trotted out in a Salisbury Police Department news conference, where Chief Jerry Stokes addressed the leaked video.

"You can see him here today," Chief Stokes said. "[Zuul] has suffered no effects from this incident."

According to documents from the visit, Zuul was doing well after, "an incident that involved his neck in October 2020."

Besides a suspected ear infection due to an allergy, the veterinarian found, "no obvious musculoskeletal or neurological damage from his incident in October."

The veterinarian continued, "I do not see any reason that Zuul should not be trained for police work."

In the weeks since the video was released, Zuul remained off-duty, and the department planned to review its K9 policies for any potential changes.

Roy Taylor, Ph.D., has worked as police chief for several state and federal agencies, and he's been following developments in the incident.

He recommended the department compare and review its policies with other agencies in the area.

"In addition, I would look to find people outside of the agency that may be able to contract with [them] to provide the training like those officers were trying to do themselves," Taylor said.

The national animal rights group, PETA, is also pushing for changes to the department's K9 policies.

Rachel Bellis is PETA’s manager of local affairs in its cruelty investigations department, and she said the group wants Officer Hampton to face criminal charges.

"While getting this individual off the force is a step in the right direction, there are still some serious, unanswered questions," Bellis said. "Why did it take five months and international outcry to get to this point? Will criminals charges be filed against Hampton, and what will happen to the officers who sat by and watched while Hampton choked, dragged, slammed and hit Zuul?"

WCNC Charlotte reached out to Officer Hampton, through a family member, for an interview and is awaiting a response.