A 2016 law that prevents police from releasing body camera footage without a judge's consent is under scrutiny after the shooting death of Andrew Brown, Jr. 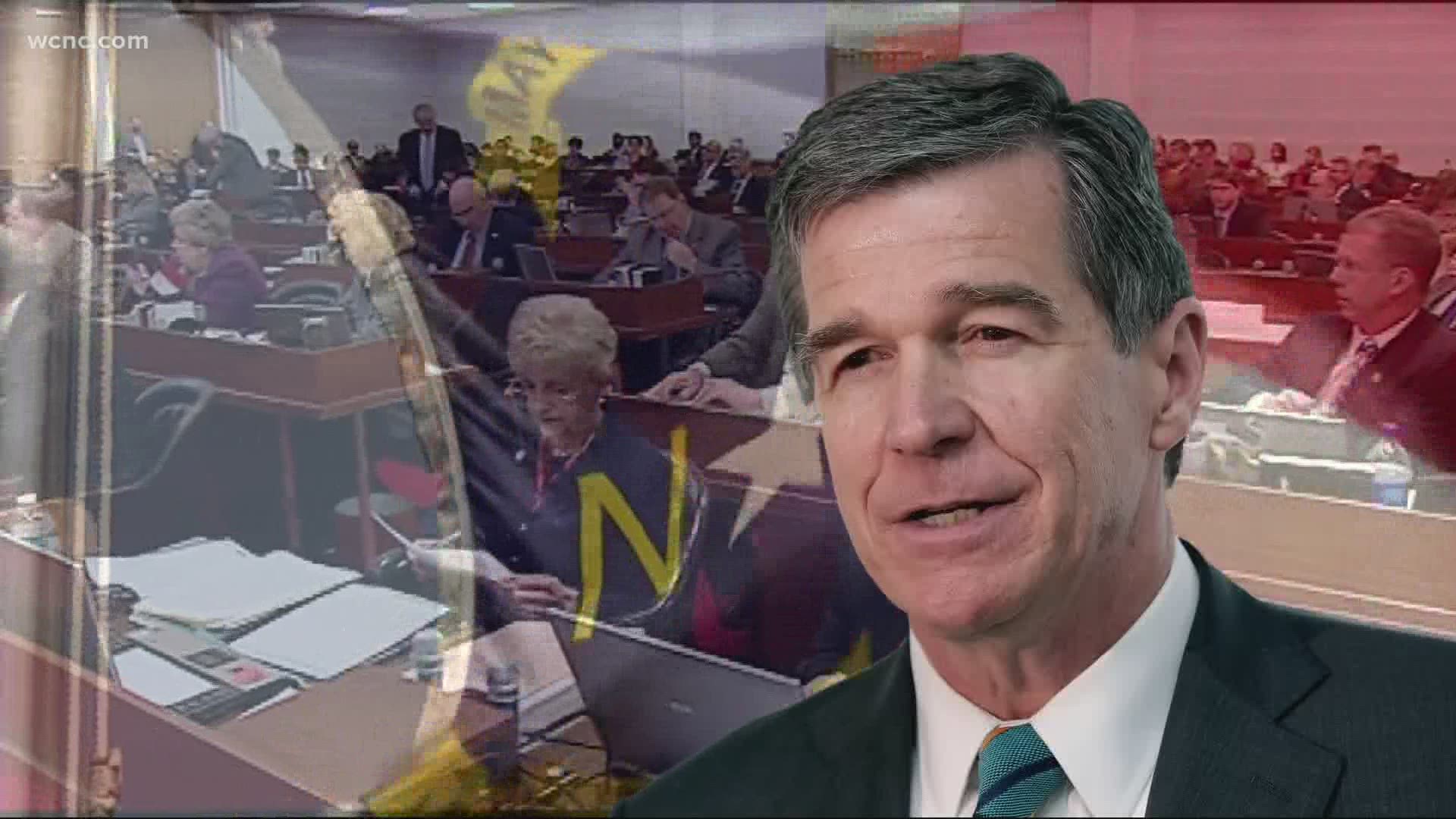 CHARLOTTE, N.C. — Between cell phones, dash cams and body-worn cameras, interactions between police and the public are playing out on screens across the country. But in North Carolina, the public won’t see that body camera footage without a court order.

“The community begins to think that law enforcement is hiding something,” Sen. Mujtaba Mohammed, a Democrat representing Mecklenburg County, said.

That mounting lack of trust playing out in Elizabeth City one week after deputies shot and killed 42-year-old Andrew Brown Jr. while serving a warrant.

As of Tuesday, his family had only seen 20 seconds of body camera footage; the public had not seen any.

“It was horrific,” Brown’s son Khalil Ferebee told NBC News. “Why did that video start off the way it did? It’s clear that something happened before that and after.”

A law in North Carolina, signed in 2016 by then-Governor Pat McCrory, prohibits law enforcement from releasing body camera footage without a judge’s consent.

The law went into effect one week after the Charlotte-Mecklenburg Police Department, under intense pressure from the community, released footage of the shooting death of Keith Lamont Scott.

It was the last high-profile police shooting in the Charlotte area that did not require a court order for the video to be released.

“We shouldn’t be setting up these modern-day poll taxes,” Mohammed said.

The senator introduced a bill two weeks before the Brown incident that would require law enforcement to release body camera footage upon request after 48 hours. Agencies would be able to petition a judge if they had concerns about the release of the footage.

Mohammed said that process would take the onus off the public.

Under current law, individuals who appear in the video or their families can request a viewing of the footage. They are not permitted to record the footage.

The Brown family was granted the chance to see 20 seconds of the footage; portions of it were redacted or omitted.

It prompted calls from the ACLU Tuesday for lawmakers to let the sunshine in.

“In real-time, we are witnessing the deep emotional pain and harm inflicted on a grieving family and community when access to body camera footage is unfairly delayed and obscured,” Chantel Stephens, executive director of the ACLU of North Carolina, said.

The Charlotte lodge of the Fraternal Order of Police still supports the current law that requires a court order, according to spokesperson Yolian Ortiz.

However, she said the organization would be open to a compromise that would permit video to be released after 48 hours, as long as a judge has seen the footage first.

“We're kind of living in a society where everything needs to be out there and quickly, but we also have to think about how this affects other people and the people that are involved in this situation,” Ortiz said. “We still want somebody to have eyes on that video before it goes out there to the public.”

Mohammed said he believes his bill will have bipartisan support.

"In 2016, 48 of 50 senators voted to update the state’s body camera laws by authorizing a judge to make the final decision on releasing footage. The goal was to remove politics from the decision-making process and to forestall the possibility of a law enforcement agency refusing to release video.

"Some, including legislators who voted to pass the 2016 law, have recently suggested changes to that process. We are always open to talking about improvements to any law, and this one is no different.

"It should be said that, to my knowledge, the first request to a judge to release Elizabeth City body camera footage was submitted just yesterday, and a hearing has been set for tomorrow. It would seem very early, then, to label as broken a process that just began a matter of hours ago."

WCNC Charlotte has several media partners that are part of the petitioning group seeking the release of the body-worn camera footage in the Brown case.

The death of Brown and the lack of transparency surrounding the case only erodes the trust between communities of color and law enforcement, according to Kristie Puckett Williams, the campaign for smart justice manager with the ACLU of North Carolina.

She traveled from Charlotte to Elizabeth City to show her support and demand transparency and answers in the death of Brown.

"Each day it has gotten increasingly tense," she said as she described nightly protests in the city.

Brown was killed by deputies a day after Derek Chauvin, a former Minneapolis police officer, was found guilty of murdering George Floyd.

Many thought the monumental moment in America's justice system was a first step in moving forward, but Puckett says Brown's death proves otherwise.

"What we thought was a huge leap and bound, was just another little tick on the marker," she said.

The positive engagement and progress made between Black communities and law enforcement only take steps back when killings like Brown's happen and when nobody comes forward with transparency, she said.

It's why she doesn't believe trust is being built.

"They haven't done the deep and intentional work that's required to recover from that," Puckett Williams said.