Ryan Lohin said he appreciated the family for providing a home-cooked meal. 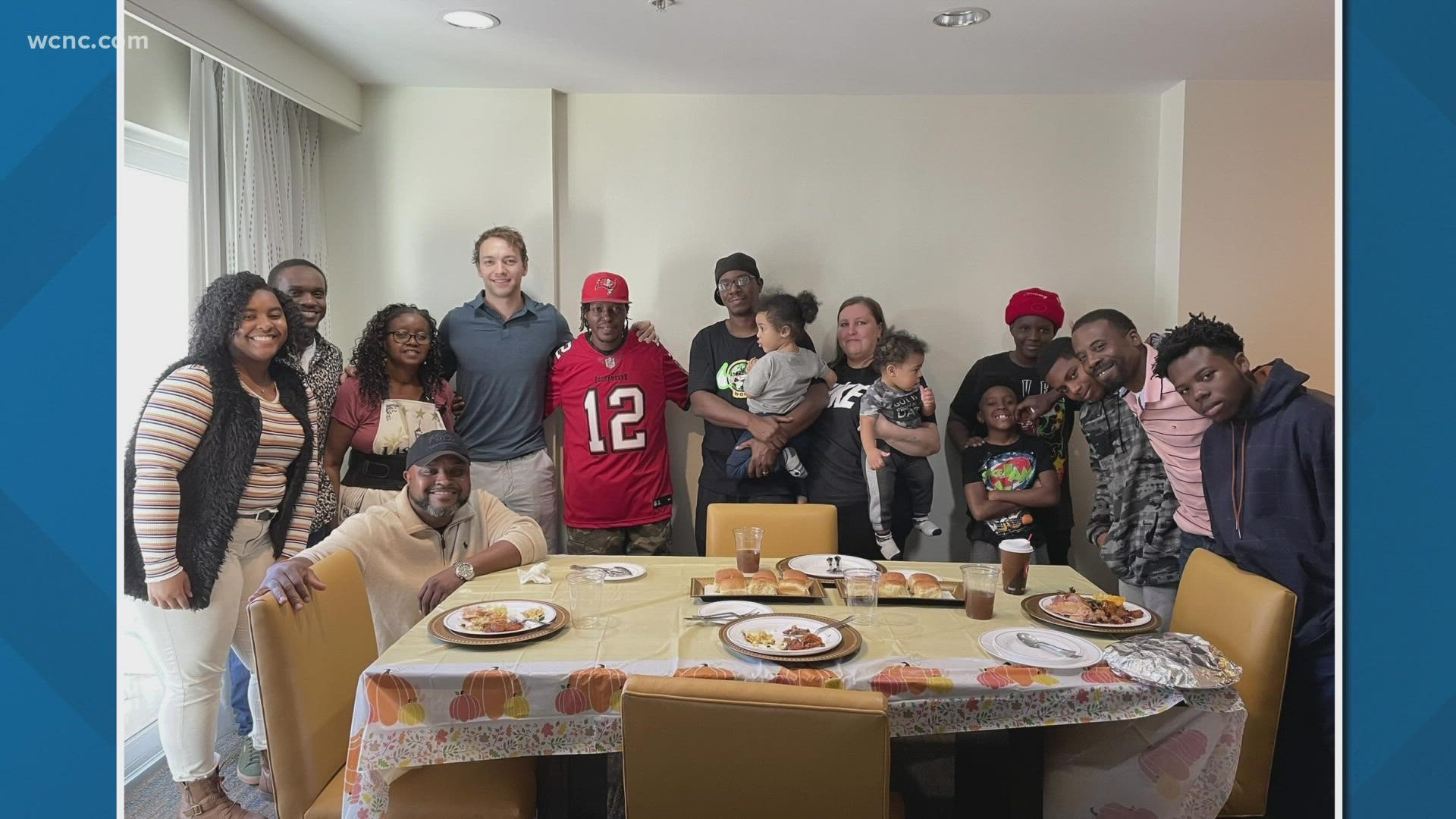 CHARLOTTE, N.C. — An act of kindness went a long way for a Charlotte Checkers player for Thanksgiving.

Ryan Lohin told WCNC Charlotte he was waiting for an Uber to Wednesday's hockey game against the Wilkes-Barre/Scranton Penguins outside his hotel when he noticed a woman struggling to get some of her Thanksgiving meal items out of her car.

"She had a full trunk, a full backseat so I just offered to help her with loading and helping her get the stuff up to her room before I left," Lohin said.

He said it didn't take a long time and that he didn't mind, but then Vivian Bowman-Meeks, the woman he helped, decided to offer an invitation.

"She asked what I was doing tomorrow," Lohin said, mentioning that nothing was really planned and that possiblly a couple of the players may get together. "She was like, 'no, you have to come, you helped me unload (the groceries) you have to come spend Thanksgiving with a family, if you like.' She gave me a key, a time and told me to not be late. I was pretty excited about getting a home-cooked meal and getting some family time in."

When helping a stranger with her groceries turns into a Thanksgiving dinner invitation. What this Holiday is all about. Thank you Vivian and Family for having me!! pic.twitter.com/uUt3ezuFTe

Lohin is originally from Chadds Ford, Pennsylvania, but is in Charlotte to continue his professional hockey career.

"You always hear about the southern hospitality and I got to see that first hand with Vivian and her family," Lohin explained. "They were so nice to welcome me in and I truly think that's what this holiday is all about. It's about surrounding yourself with family and friends, and in my case, people who were complete strangers that welcomed me in. It was really special and the people in Charlotte have been great. This just adds to it."

Lohin explained that as a professional athlete, and just as a person in general, you're taught to treat others how you want to be treated and that he had that in the back of his mind, especially during the holiday season. Lohin added that he would hope someone would help a family member of his if they were having a hard time unloading groceries.

"In this case, it was about five minutes of my time," he said. "I'm hopeful it was a big help to her and her family. I was really lucky to run into such a kind-hearted family that was able to take me in and treat me like I was part of the family.

WCNC Charlotte reached out to Vivian to speak late Thursday night but she was unable to after a busy day.

The real question, though, is could this dinner be expected for future Thanksgivings?

"They were talking that this may need to be a tradition," Lohin said with a smile. "The meal was obviously fabulous. We'll have to reach out for the next holiday and see where they are and where I'll be, maybe I can stop by."

The Checkers are back in action in Charlotte with games against the Utica Comets on Nov. 27-28 inside the Bojangles Coliseum.

You can learn more about the Checkers and how catch a game this season by visiting the team's website.