The Charlotte mayor talked about video of a situation between police and protesters Tuesday. "Last night is one of those nights that none of us can be proud of." 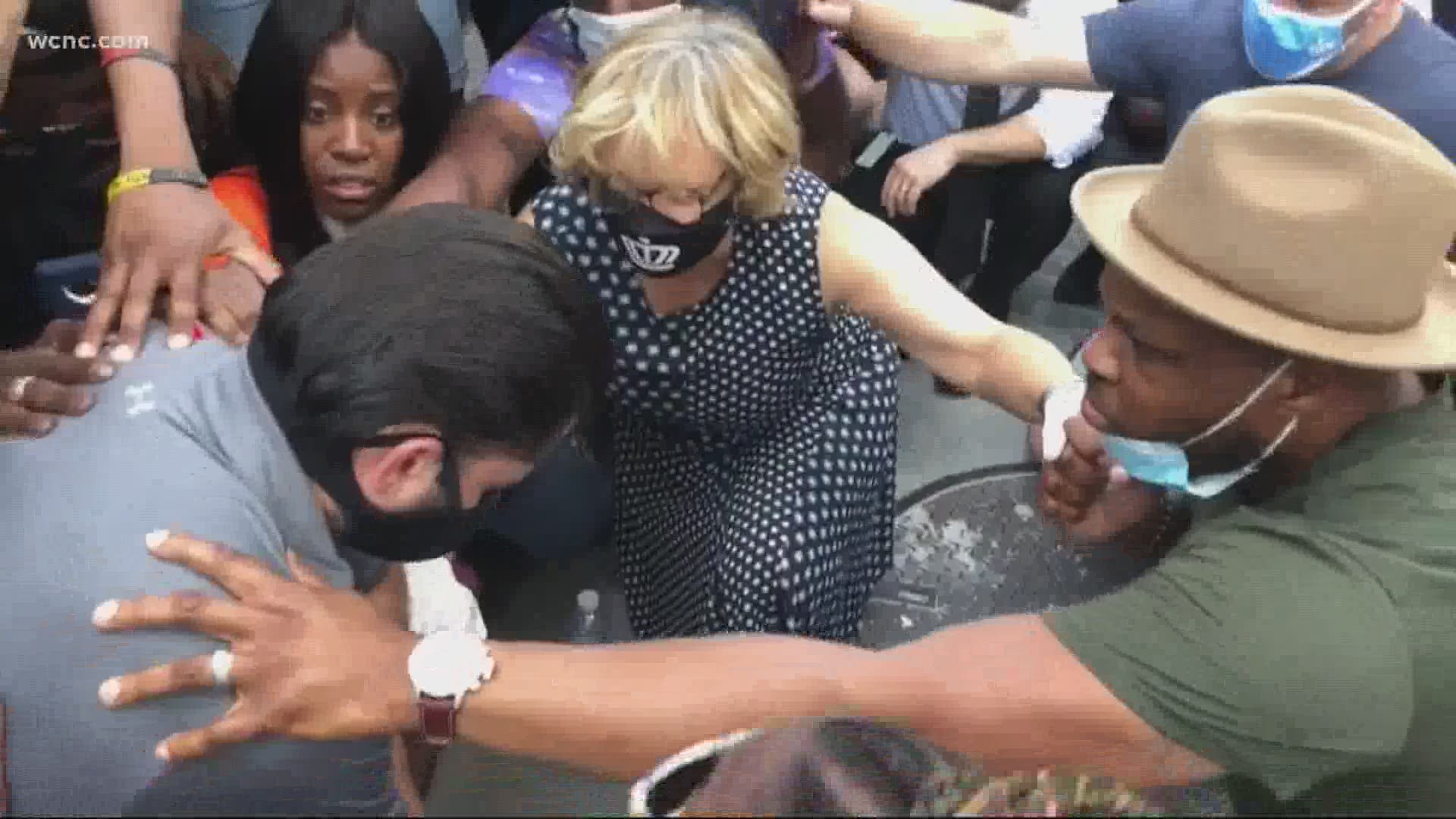 CHARLOTTE, N.C. — Charlotte Mayor Vi Lyles says there are no words to describe Tuesday night's incident on 4th Street where protesters appeared to have been trapped between different lines of CMPD officers.

"Most of you are aware there was a video of the protest action that took place last night. And on that video it appeared to be a situation that there are probably not the words to describe the way that it appeared and how it acted and turned out," Lyles said.

Earlier Wednesday Charlotte-Mecklenburg Police announced it will conduct an internal review of its officers' actions after protesters said they were trapped and gassed in uptown.

Charlotte City Council met in closed session Wednesday and Lyles said the one thing all members agreed upon was hearing from residents.

"We need to make sure that we ask the questions: what is this pain causing you and what can we do about it," Lyles said.

"The Charlotte City Council, your mayor, all of us feel that we are in a particularly dangerous time right now.  We can make a decision whether to actually work towards a better city or we can just sit and let ourselves be found in a place of darkness.  I choose light over darkness any day," Lyles said.

Mayor Lyles did just that, walking off to lead hundreds to the streets of Charlotte.

Some accused Mayor Lyles of not answer many questions from the community at the event.

CMPD Captain Brad Koch took a knee with protesters as well, telling one woman it was "on behalf of the entire department."

Protesters also took a knee in honor of other victims killed by officers.

Once protesters reached the CMPD headquarters in uptown Charlotte, some started chanting "where's the chief."

Shortly after, it was announced that by popular demand the CMPD chief was on his way to talk to protesters — it was not clear if it was referencing CMPD Chief Kerr Putney or the future CMPD Chief, Johnny Jennings.

City Manager Marcus Jones also spoke during the news conference Wednesday saying in order to keep public trust they are bringing in the SBI to investigate what took place.

Jones said the SBI will review policies as they relate to policing and procedures.  If the review finds any of that is incorrect, Jones said they will be fixed.

"If those policies and procedures are deemed to be adequate during this review, we're going to address them anyway," Jones said.  "Because what occurred last night is a reflection of us and it's important that you continue to have trust in the leadership of the city."

Lyles said Charlotte Mecklenburg Police should release all body camera videos from the incident so that everyone can see what happened. She says the state law hampers that but they are working through it.

“That video is disturbing.  No two ways about it,” said CMPD Chief Kerr Putney during a news conference Wednesday.  “And the other thing I need you to know is there are a lot of other angles and videos and perspectives that you need to see. “

Putney explained approval must come from a judge to release body cam video.

"And that is exactly what we're going to do," he said.

Putney said he reached out to ask the SBI to review the incident to determine whether or not any laws were violated.  There will also be an internal investigation.

"I can't get into a lot of the specifics, but I can tell you I didn't like what I saw.  I can't wait until I can share more," Putney said.

He went to to say this one incident overshadows all of the positive work the officers have been doing.

This is a developing story. Refresh this page for the latest from WCNC Charlotte.