Pirate Jean Laffite faked his death and moved to Lincolnton

A famous pirate by the name of Jean Laffite supposedly died in the 1820s. New research by two local women can prove the pirate hid away in Lincolnton, North Carolina 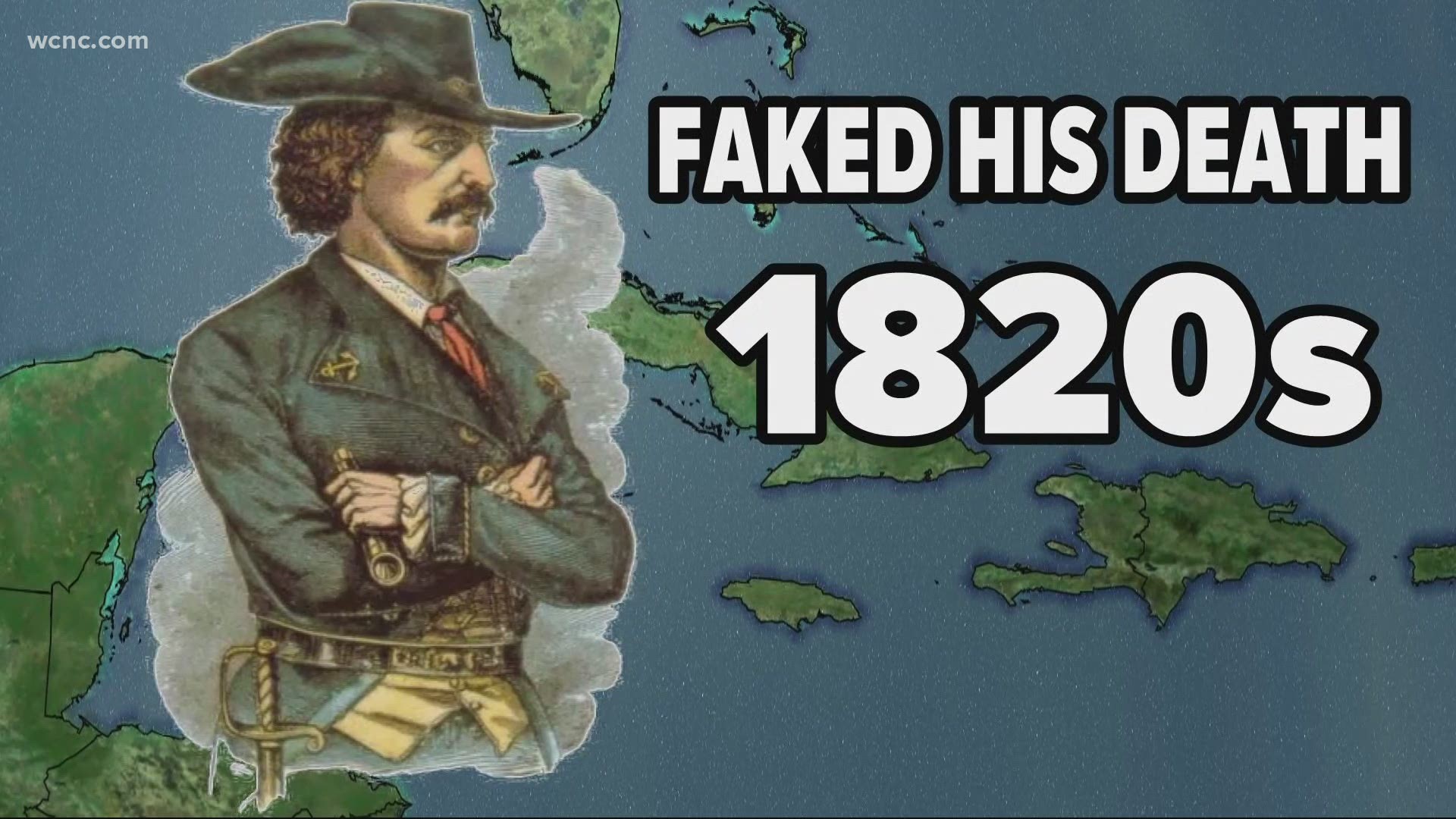 LINCOLNTON, N.C. — Everyone loves a good pirate story about sailing the seven seas, but this pirate story is more about the ending that takes place in -- of all places -- Lincolnton, North Carolina.

The Shortened Story about Jean Laffite

Jean Laffite was a famous pirate in the early 1800s when piracy was a tad different than what we see in the Pirates of the Caribbean movies. Laffite had some enemies and faked his death during the 1820s in the Caribbean.

With the help of some friends, he hid away in Cuba after his faked death. In the early 1830s, he made his way north during the cotton boom and settled down in Mississippi under the new name Lorenzo Ferrer.

How Jean Laffite ended up in North Carolina

Laffite became friends with the Henderson family who ultimately convinced him to come up and live in Lincolnton, North Carolina. Yarbrough, one of the co-writers of the book, mentioned that Ferrer never had a job in Lincolnton. Oliphant, the other co-writer of the book, said there may have been gold hidden under the Lincolnton Town Hall around the time of the Civil War.

Ferrer (aka: Jean Laffite) died at the age of 96 in 1875 and was never officially proven to be the notorious pirate until now.

This book about Laffite was officially released on March 15, 2021, and it unlocks the mystery of what really happened to the famed pirate.

This book starts in 1805 and traces Laffite through his rise to power as a privateer and smuggler in the Gulf, his involvement in the Battle of New Orleans, his flight to Texas, and his eventual disappearance in the waters of the Caribbean.

Oliphant and Yarbrough cracked the code and made a bunch of unknown discoveries of what Laffite did after he faked his own death.

Before this book, the idea that Laffite just changed his name and didn't die in the Caribbean was only a myth.

It's a fresh look at the various legends surrounding one of the last great pirates.

All the information from this book was backed up by first-hand research and the research hasn't stopped after the book was released.

There were many unique discoveries from years of research and trips from Texas to New Jersey, finding new documents to reveal the secrets But one of the later discoveries ended up being close to home.

Tucked away in the Lincolnton Freemason Lodge had been hanging the famous pirate's sword. The sword was officially analyzed, and the engraving of how Laffite signed his name was hand-etched on the sheath of the sword.

Credit: Lincolnton Freemason Lodge
Tough to see but the JA how Jean spelled his name is visible.

Jean Laffite's fake name, Lorenzo Ferrer, was spelled as written but the name Lorenzo is misspelled on his gravestone. His grave has a 'D' in his name.

Credit: WCNC
The misspelling of Jean Laffite's fake name on his gravestone.

You can buy it online, and since Amazon.com is currently sold out of their books, their website http://jeanlaffiterevealed.com is recommended instead.

Or you can meet the authors at one of their upcoming events:

RELATED: This park has a lot more to do than just walking