Hundreds of homeless live in tents blocks away from Uptown Charlotte. Now, a local property owner is suing the city and county, citing health and safety issues. 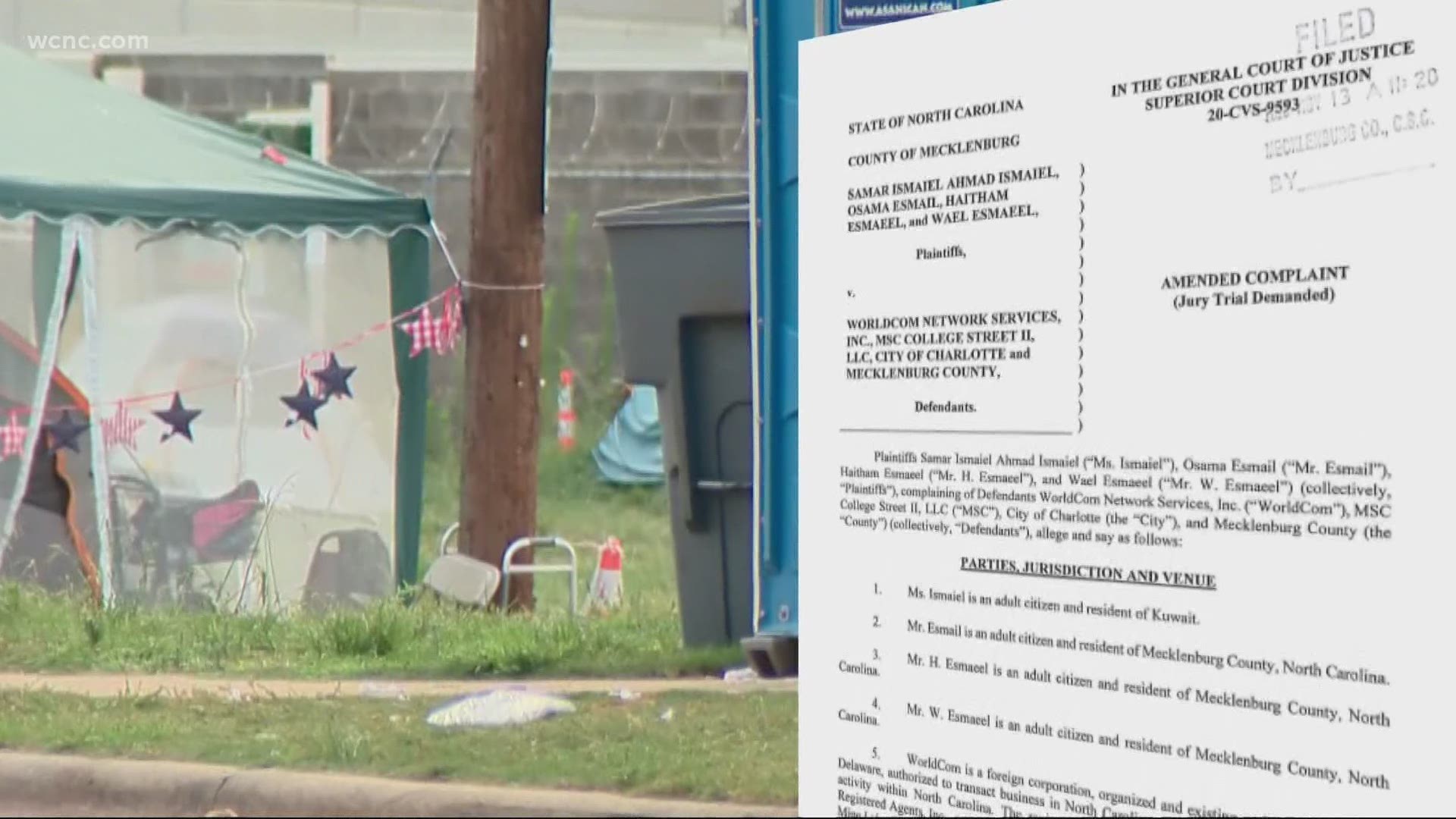 CHARLOTTE, N.C. — As hundreds of tents continue to pop up along Uptown Charlotte streets, a local property owner has filed a lawsuit against the City of Charlotte and Mecklenburg County.

The lawsuit alleges the city and county are herding homeless into tent cities that line the sidewalks, rights-of-way. It also goes on to read that the tents have crept onto private properties and parking lots along North Tryon Street.

The property owners at 900 North Tryon adjacent to the encampments said the policies create “a nuisance and impose an unfair burden.”

The plaintiffs, Samar Ismaiel Ahmad Ismaiel and her three brothers, claim their property is valued at $4 million but it’s been rendered essentially worthless; they are seeking unspecified damages.

“They’ve tried to sell it and they’ve had three sales fall through,” said attorney Ed Hinson who represents the property owners. “We can’t use the property and we can’t sell the property because of what’s going on. If you’re gonna deprive our clients of the use of the property then pay us for it.”

“It’s a humanitarian issue as far as we’re concerned,” Hinson said. “There are places in the third world where refugee camps are more habitable than are the tent encampments that the city and the county allow to operate right here a couple of blocks from downtown Charlotte.”

The lawsuit was initially filed this summer and named the owners of the properties being inhabited by the homeless.

At the time, the lawsuit stated that if the property owners did not address the issue, they would name the City of Charlotte in the suit as well.

Hinson said they have had numerous meetings with city and county leaders filled with what he called “hollow promises.” In the meantime, the homeless camps have just gotten bigger.

Hinson called it a public health and safety issue.

“There are hundreds of tents there and all those people have to go to the bathroom and there’s no bathroom facilities so you can imagine what a mess it is,” he said

RELATED: Tent cities are popping up around Uptown Charlotte. Here's how you can help residents.

Many of the residents said they have seen the camp grow in size due to the economic downturn from the pandemic.

“We didn’t ask for this but a lot of us got put in situations where we had to come out here,” said Katrina Carter, who has been in and out of Tent City for months.

Residents said the shelters are stretched thin or maxed out in capacity, leaving them with no place else to turn.

“This system has torn us down to the point where we feel like we have no hope,” Carter said. “We need hope.”

Hinson said his clients are sympathetic to the situation.

“It’s Christmas-time and there’s no room in the inn,” he said.

The lawsuit asks the city and county leaders to either find a safe and humane place for the homeless residents to relocate or buy out the property owner.

“The city can solve a problem when they want to,” Hinson said. “It’s just a lack of will.”