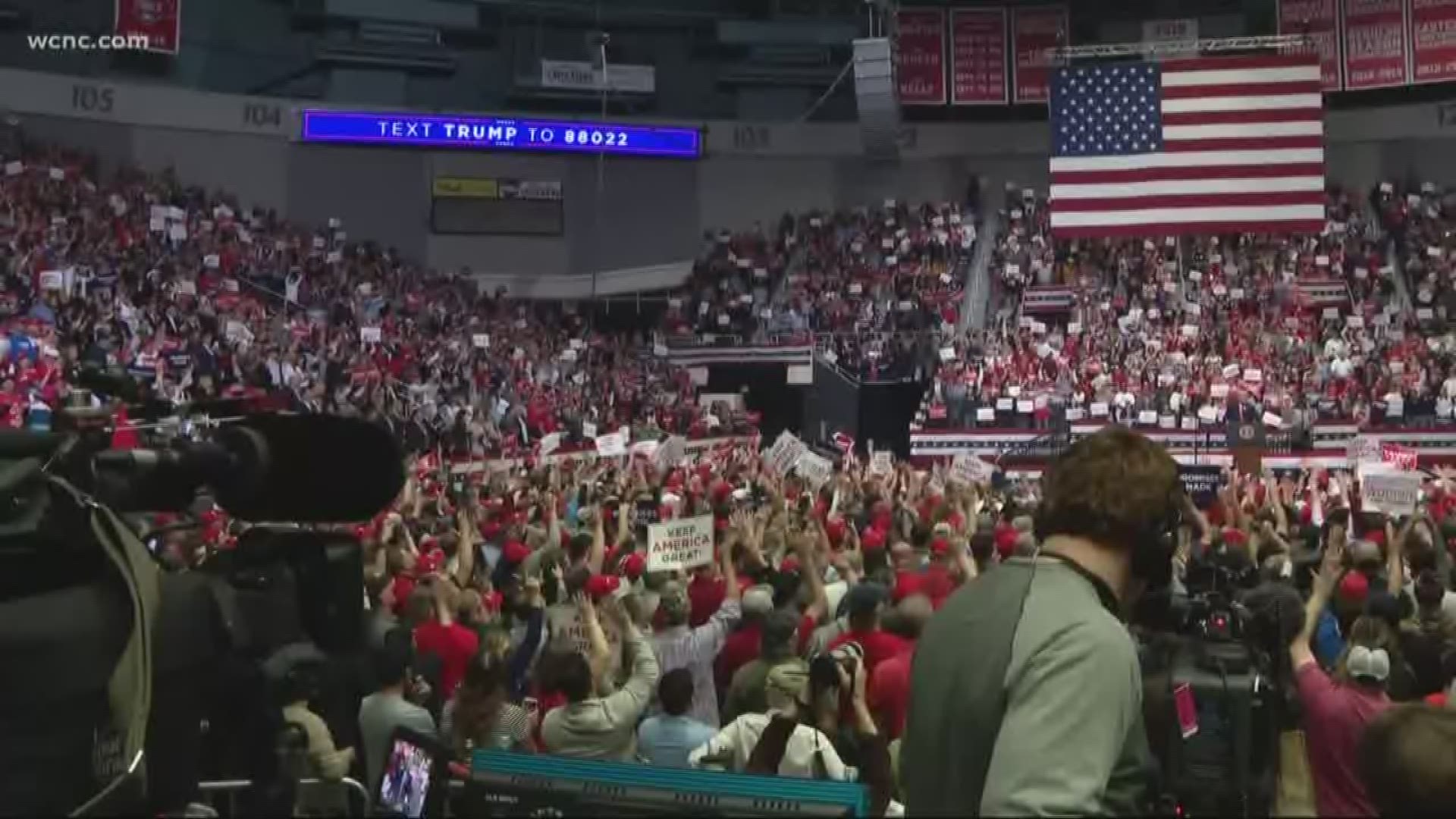 CHARLOTTE, N.C. — President Donald Trump held a campaign rally in Charlotte, North Carolina Monday evening. He was revving up his supporters on the eve of Super Tuesday's big round of primaries.

President Donald Trump gloated about the stock market comeback and fired off sharp critiques at the thinning Democratic presidential field during a rally Monday in North Carolina.

He was in high spirits after the Dow Jones Industrial Average soared nearly 1,300 points Monday as stocks clawed back from a seven-day rout.

“I’m thrilled to be back in the great city of Charlotte,’ he said as the crowd cheered and waved signs of support.

He made fun of Joe Biden's verbal gaffes, and while he noted the “enthusiasm” of Bernie Sanders' supporters, he insisted it is “much less than we have.”

Trump wasted no time turning to his Democratic opponents saying they were rigging the election against Bernie Sanders, who held the lead in the race for delegates ahead of Super Tuesday. He singled out Amy Klobuchar and Pete Buttigieg, who have both dropped out of the race.

Buttigieg has since thrown support to Joe Biden.

RELATED: Buttigieg endorses Biden, Klobuchar drops out of the race

The president's supporters began lining up outside Bojangles Coliseum in the early morning hours.

In his rally Friday in Charleston, which also came on the eve of that state's presidential primary election, Trump instructed his republican supporters to vote for the democratic candidate 'who the hell is easier to beat.'

That message came after the South Carolina GOP canceled that state's Republican primary, making incumbent President Donald Trump the presumptive winner automatically. Under state law, voters in South Carolina are allowed to vote in any one primary regardless of their registered party.

President Trump won't have that convenience in North Carolina, which has a semi-closed primary. In the Tar Heel state, registered democrats can vote only in the democratic race, and registered Republicans can only vote in the republican race. The only exception is unaffiliated voters, who can pick which one ballot to receive.

Also during his rally Friday, Trump took shots against those democratic rivals, saying they were politicizing the coronavirus outbreak. He defended his administration against criticisms that they were not doing enough about the disease that's grabbed worldwide headlines.

RELATED: 6 dead in US from coronavirus as more states announce first cases

RELATED: Facts Not Fear | What you need to know about the COVID-19 outbreak

While it was not immediately known what Trump would discuss Monday, he was expected to discuss the changing democratic race for the White House, which saw former Mayor Pete Buttigieg, Senator Amy Klobuchar, and billionaire Tom Steyer leave the race after the South Carolina primary. 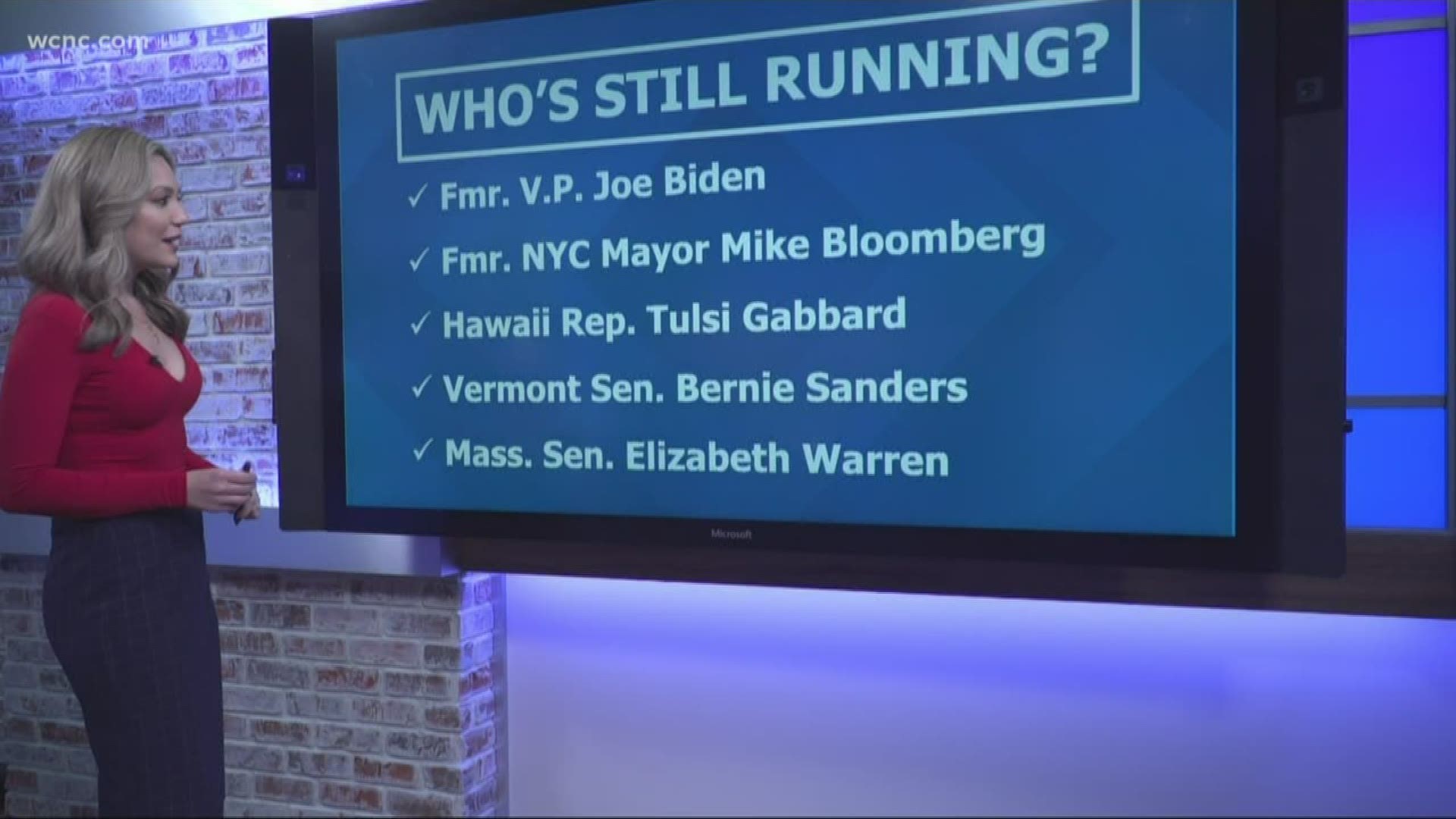 In addition to talking about the primary, Trump also addressed the growing concern over the spread of the coronavirus, Trump said his administration was taking steps to combat the threat.

“We are doing everything in our power to keep sick and infected people from coming into or country,” he said.

The President is expected to make several return visits to North Carolina ahead of the November election, including in August when Charlotte will be the site of the Republican Convention.

Tuesday sees the largest number of delegates pledged in a single day throughout the primary election cycle.