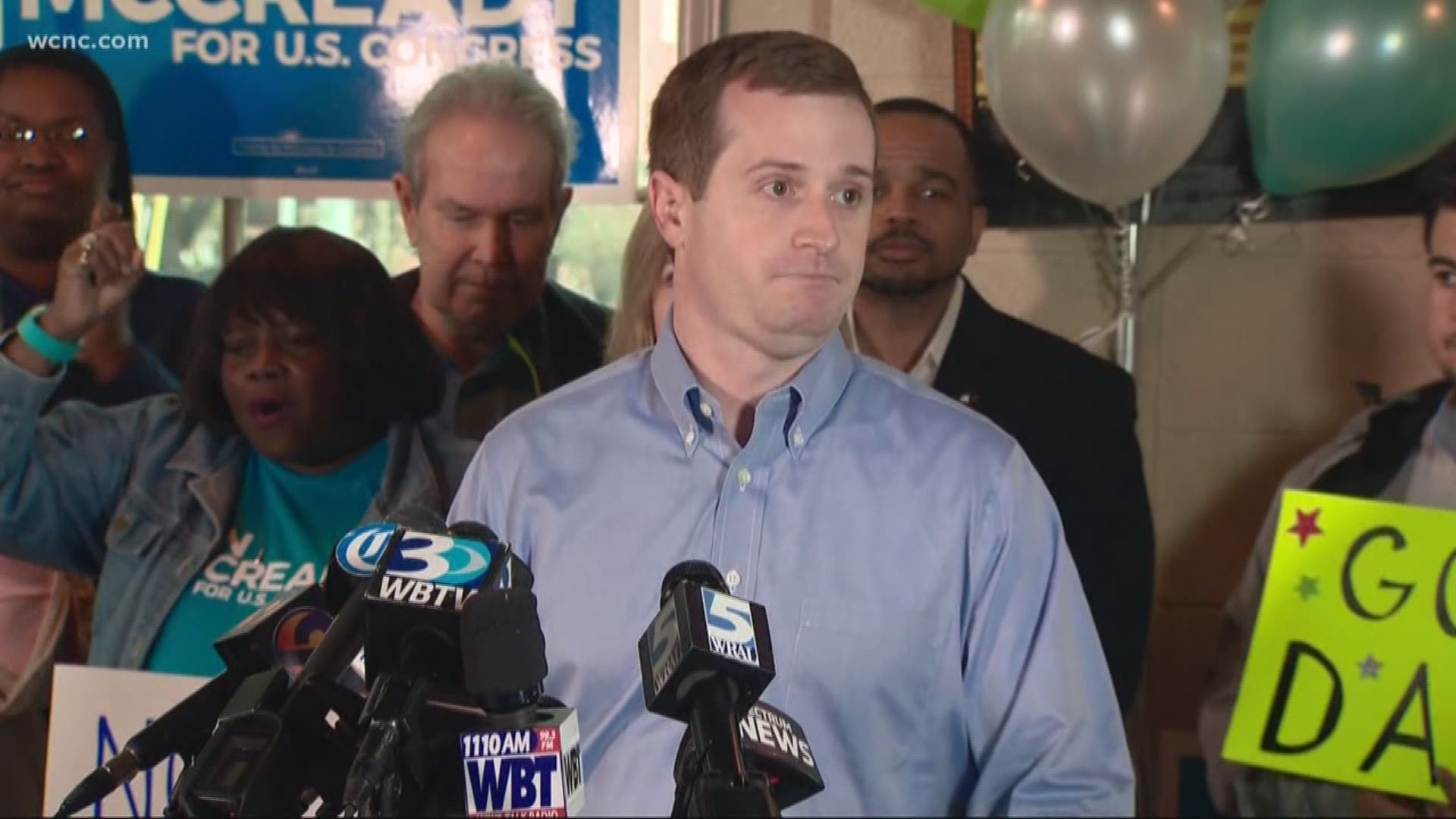 "We are in this fight and we're going to win this fight," McCready said in front of several members of the media and supporters.

The announcement came less than 24 hours after a bi-partisan election board, consisting of three Democrats and two Republicans, voted unanimously to throw out November’s results over allegations of absentee ballot fraud by Republican Mark Harris’ campaign.

In what may have been a symbolic move, McCready held the conference at Dream Catchers Brewery in Waxhaw, admitting he thought his campaign was over last November.

“Laura and I took the kids down to Disney World because you know, that’s where you go when you have four little kids and you need to relax after a long campaign,” he joked.

McCready added even his campaign team had dispersed, saying one member was headed up the highway with her U-Haul when she heard of Thursday’s verdict.

However, McCready wasted no time and stepped in front of a large crowd to discuss why he’s now fighting harder than ever.

“There are young people right now wondering does their vote even count anymore when they see this kind of cheating and it’s hard to blame them because every time they see a politician get up to Washington, do the wrong thing before the right thing – and for North Carolina’s 9th district that stops today,” said McCready. "We are in this fight and we're going to win this fight.”

So far, no date has been set for the new election and it’s still not clear if republic candidate Mark Harris will run again. On his morning talk show on WBT radio, former North Carolina Governor Pat McCrory weighed in, saying he spoke with Harris Thursday evening.

“Mark Harris told me last night on the phone that he wants to run again but he needs to make sure he’s healthy,” said McCrory.

Toward the end of the four-day long hearing, Harris told the board that even he believed a new election should be called.

“It’s become clear to me the public’s confidence in the 9th District seat general election has been undermined to an extent that a new election is warranted,“ he said, adding that he physically could not go on.

“Though I thought I was ready to undergo the rigors of this hearing and am getting stronger, clearly I am not, and I struggled this morning with both recall and confusion," Harris said.

Harris explained he suffered a severe infection in January, which led him to have two strokes.

North Carolina state law says there must be a new primary in addition to a new general election, so it’s possible we could see more names thrown into the ring.

McCrory himself was rumored to be considering a run. When asked about a bid on his talk show he replied, “We’ll talk about that next week.”

He along with other members of the Republican party, together with members of the Democratic party, agreed there are still many unanswered questions, specifically relating to how widespread absentee ballot fraud was across the state.

“Because I’ve run three statewide elections, and I want to know about this massive fraud, and apparently this massive fraud was just in one or two counties in North Carolina – what about the other 98 counties?” said McCrory.

NBC Charlotte also did some digging on how much a new election for the 9th District race is going to cost taxpayers. We know there will be three parts -- the filing period, a primary election, and a general election that experts said could be this summer.

The race between Harris and McCready was the nation's last undecided congressional race.