Numerous flights held for Boy Scouts waiting to check-in and be screened by security at airport. 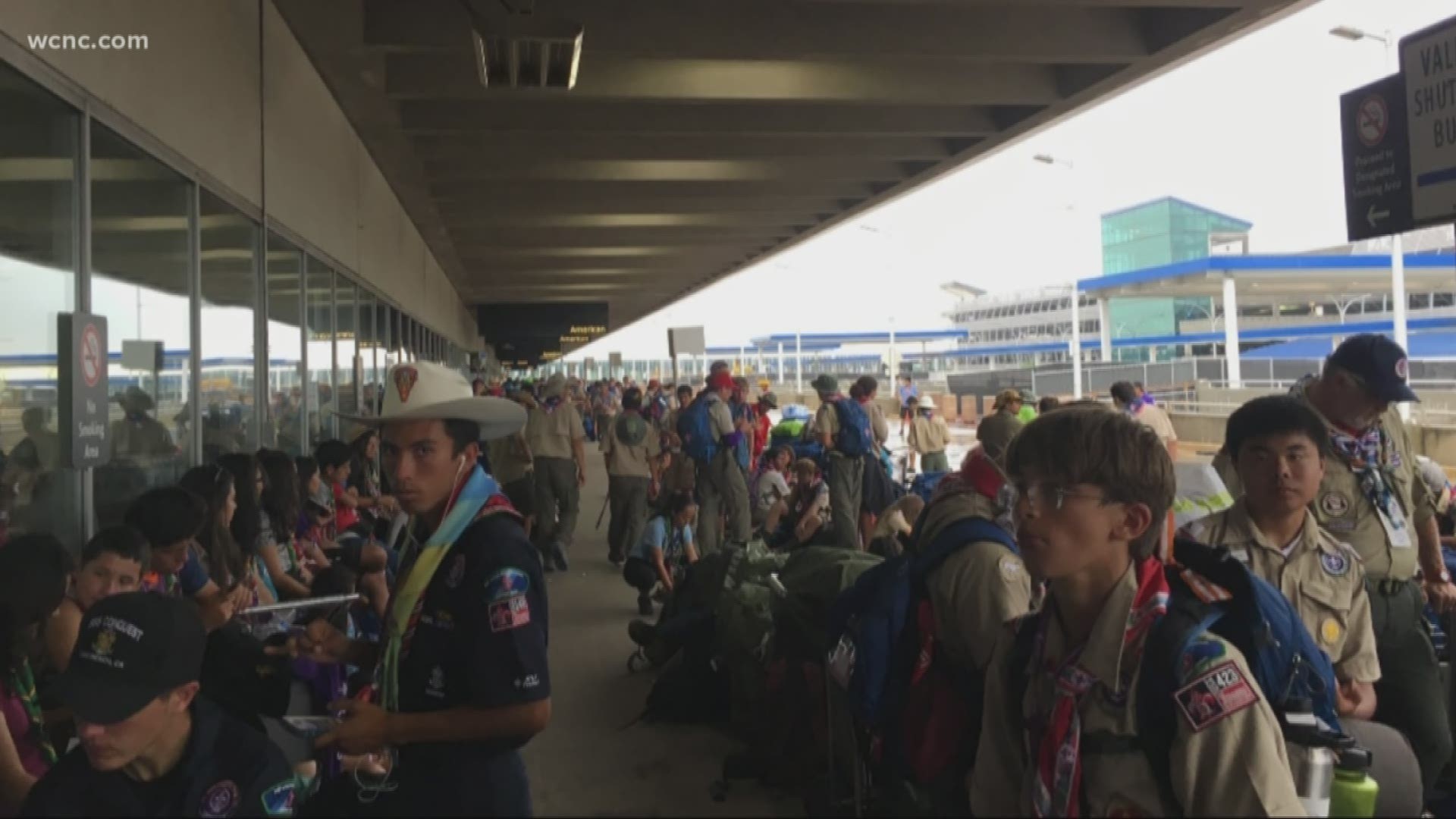 "Did you somehow not notice the 1,000s of Scouts booked to leave today?" a tweet from @CallieBuddy asked.

Another user, Patricia Baker, tweeted at American Airlines with photos her son sent her from Charlotte.

"There are thousands of Boys Scouts sitting in the terminal and out in the rain in Charlotte, NC waiting to get checked in for their flights. What a disaster? 'Be Prepared' obviously does not apply to AA," she said, quoting the famous Boy Scout tagline.

Baker told NBC Charlotte her son was a 19-year-old young adult leader with a troop from Houston, Texas.

"These kids haven't eaten most of the day. Do the right thing @AmericanAir and help out some Boy Scouts. You knew these groups were coming. Shame on you!" she tweeted in a message that has since been deleted.

Alan Kaye said his son and 18 others are still stuck in Charlotte at a hotel without their luggage, which was already sent back home.

"He's an Eagle Scout, and he's pretty capable of handling himself," Kaye said of his son. "It's just unconscionable that they would screw over that many people when they knew it was coming. It's ridiculous."

In response to tweets and reporting from WCNC, American Airlines said the airline, Charlotte Douglas International Airport, and the World Scout Jamboree have been working together over the past several weeks to prepare for the departure of thousands of Scouts.

"Unfortunately, getting the Scouts home [Friday] has been extremely challenging," the airline acknowledged in a released statement. "Severe weather the night before resulted in numerous delays and cancellations and increased traffic in the lobby area, which became overcrowded."

An airline spokesperson told NBC Charlotte it was always the plan to stage Scouts outside because of available space at the check-in counters.

"The Scouts were staged outside and were provided water," the released statement continued.

The World Scout Jamboree was held this week in Mount Hope, West Virginia, more than three hours north of Charlotte. Around 45,000 scouts from 169 countries were in attendance.

“Despite ongoing efforts, inclement weather and higher than normal passenger volume have contributed to a number of delays at Charlotte Douglas International Airport that has affected scheduled travel of Scouts returning home following the World Scout Jamboree," a spokesperson for the 2019 World Scout Jamboree told NBC Charlotte in a statement.

During the height of the process Friday, the airline responded on Twitter, including this response to Baker.

"We're aware of the large group of scouts, and are working at the local level to help get them onto their flights," the company tweeted.

"Going on 8 hours. You should give all of those Scouts free food on their flights. At a minimum," Baker tweeted back.

After check-in, those who were not immediately placed on awaiting aircraft, were offered refreshments, the airline told NBC Charlotte.

"American provided pizza in the evening for those in the lobby and snacks & drinks at all of our special service counters on each concourse," the airline reiterated to NBC Charlotte Saturday.

"We held more than 70% of our flights to accommodate hundreds of passengers in case of delays that were caused by check-in and/or processing through security," an airline spokesperson said. "For those Scouts who were unable to make their flight we were able to accommodate them on the next available flight."

Baker's story was not unique. Robert Parkhurst also tweeted photos of the boy scout crowd at the airport.

"Chaos at the @Americanair terminal at the Charlotte airport as Scouts leave the #ScoutJamboree. @AmericanAir checking in groups via regular checkin, telling one group to go in and then back out. Will we make our flight? @2019_wsj @worldscouting," he posted.

Similar tweets from Parkhurst and others followed. Parkhurst later tweeting: "Now it’s starting to rain outside. Hundreds of Scouts are out in the rain. Beware @AmericanAir , you might get a whole lot more people in the terminal very shortly."

Three hours after he first tweeted, Parkhurst followed up.

"We are on the plane!," he wrote shortly after 8 p.m. "Thank you @AmericanAir for your efforts and for holding the plane for us."

Officials said 8,000 passengers arrived at the airport at the same time, and due to passenger volume, the airport put plans in place to restrict access at the ticket counter.

"We know it has been a long day for the Scouts and many of our passengers and we look forward to getting them to their final destination safely," the airline said.

"The airport is open and is still continuing to process passengers through the airline ticketing process and the TSA security checkpoints. For those who have not made connections, the airline will rebook those passengers on the first available flights to their destinations cities."

American Airlines said more Boy Scouts are scheduled to depart Saturday. The airline said on both Saturday and Friday, the ticket counters and security checkpoints opened early to accommodate the expected travelers.