North Carolina Governor Cooper said playgrounds, museums, and gyms may be able to reopen on July 17. 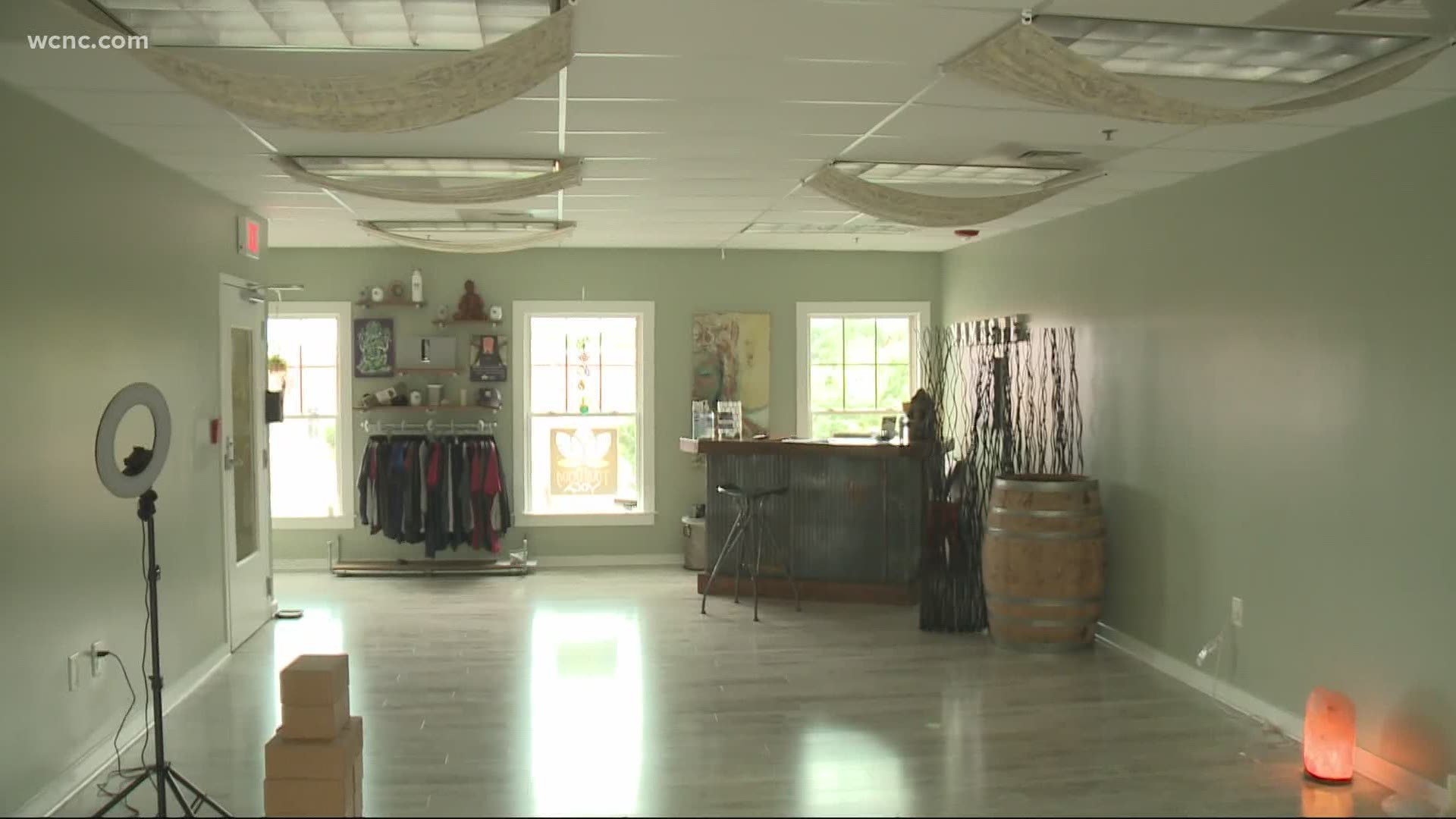 CHARLOTTE, N.C. — North Carolina will not move into Phase 3 on Friday. Instead, Governor Roy Cooper announced the state will stay in a Safer At Home Phase 2 for another three weeks until July 17.

Cooper said the COVID-19 data and trends are moving in the wrong direction to be able to move the state forward in easing more restrictions.

"It's clear that our numbers will keep us from moving ahead into the next phase of easing restrictions,” Cooper said. “So, today I'm announcing that North Carolina will pause and continue our Safer At Home Phase 2 for another three weeks."

Gyms, bars, and entertainment venue owners that were hoping to open their establishments later this week will now have to wait even longer.

Mian Rex, the owner of Total Being Yoga, already has plans in place to safely reopen her studio for in-person classes, with markers on the floor to socially distance students, hand sanitizer available, and other measures.

Cooper said playgrounds, museums, and gyms may be able to reopen on July 17.

Rex said the studio switched to virtual classes when it couldn’t hold in-person classes, but lately, she said she’s noticed a drop in attendance of those. As the months continue to pass, she is worried about how to get by with little money coming into the business.

Already, Iyengar Yoga Charlotte decided to close its physical location and switched to online classes, and Yoga One posted on its Facebook page that it is ceasing operations.

Total Being Yoga is working hard to make it through the pandemic and have the chance to put its studio plans into action.

"Give us the chance. Let us open up,” Rex said “ Let us open up. Sorry, it does get emotional — just let us help those around us. We all need it. We're human. We're not meant to be alone in our house. We’re meant to be in a group setting.” 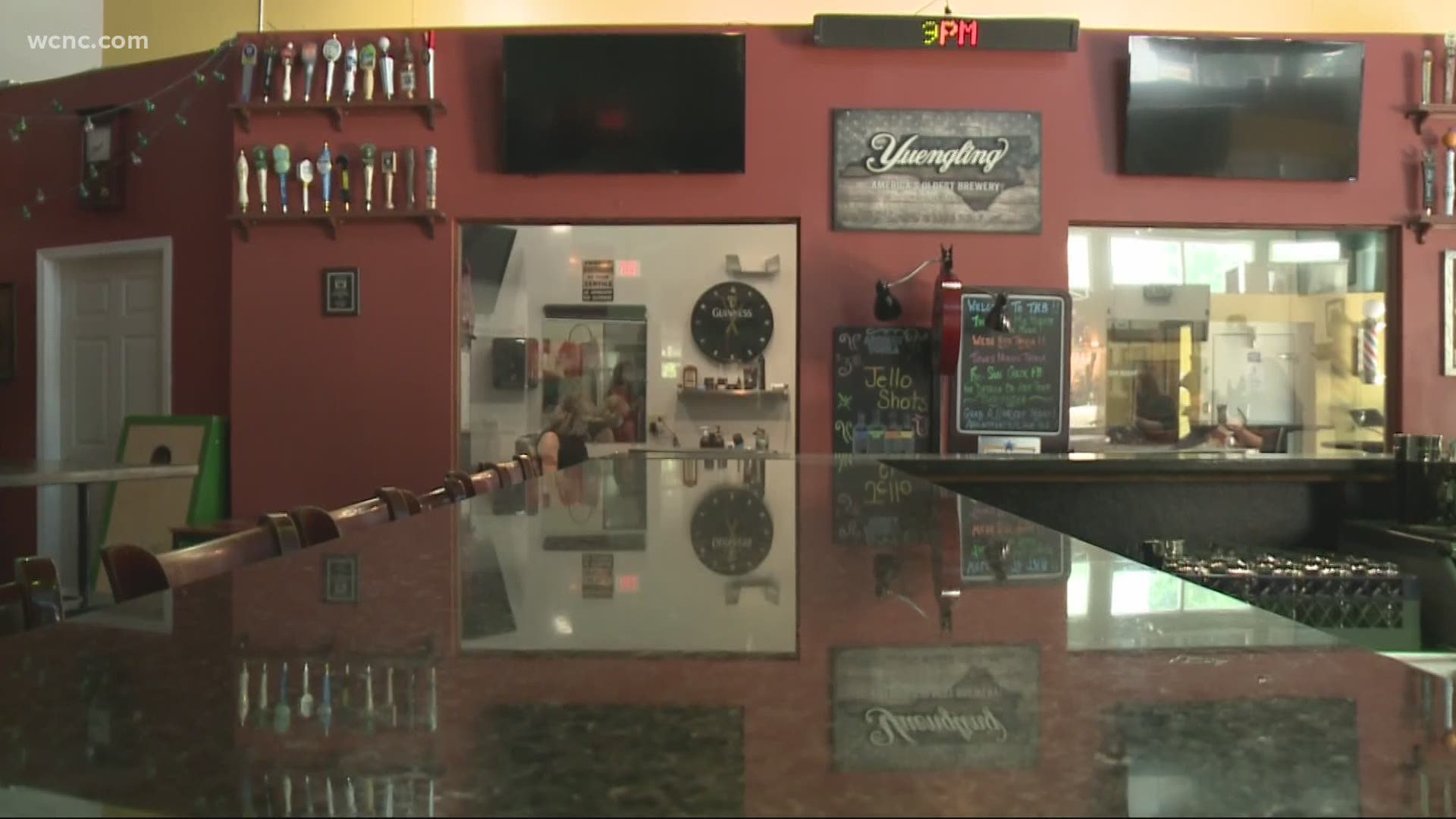 The Kilted Buffalo, a barbershop and bar combo with locations in Huntersville, Mooresville, and one coming soon in Plaza Midwood, thought it would be able to open its bar under Phase 2, only to find out two days before that it wouldn’t happen.

Shawn Shrader, the owner of The Kilted Buffalo, has already been working to implement changes and adjustments he expects will be required when they do reopen.

"It would be a little bit of a different feel,” Shrader said. “It wouldn't be the exact same as bars as you know it. It would be more of sitting at tables, appropriately distanced. You know, our goal is to be safe."

The barbershop is allowed to open under Phase 2 guidance. Shrader said the salon is normally about 30% of the business, but at 50% capacity, it now only makes up 15% overall.

"My staff has been out of work for three months,” Shrader said. “They are, hate to use the word desperate, but they are eagerly desperate and excited to get back to work to try and earn a living."

Governor Cooper did not mention a date when bars could reopen at his news conference Wednesday afternoon.

Shrader wrote in a text message after the announcement, “…my staff and I are deeply disappointed and frustrated about the Governor’s decision to keep us closed for at least 3 more weeks if not longer.”

While restaurants with bars, breweries, wineries, and more are allowed to be open and serve alcohol under Phase 2 guidance, The Kilted Buffalo is among the 15% of ABC permit-holders in the state not allowed to open and make money, according to the North Carolina Bar and Tavern Association (NCBATA).

“The governor’s decision is effectively signing a death warrant for 1,063 bars across North Carolina while offering zero relief to the small-business owners or their employees,” said Zack Medford, president NCBATA. “Asking private bar owners to lose everything they've worked for while their competitors can thrive is unconscionable. Enough is enough. This is an issue of fairness. It is time for the courts to decide.”

“Why is it safe and legal to drink until 2 a.m. at 85% of North Carolina bars, yet dangerous to behave the same way at a private bar?” Medford said. “There is nothing inherently different about a private bar or its clientele than a hotel bar, brewery bar, or restaurant bar when held to the same safety guidelines.”

“We would urge all business owners to encourage every person to wear this mask,” Cooper said, “because when that happens, we believe these numbers will level out and we can begin easing restrictions.”