At a meeting, the Division of Employment Security largely blamed North Carolina's failure to get benefits out in a timely manner to first-time, inexperienced filers. 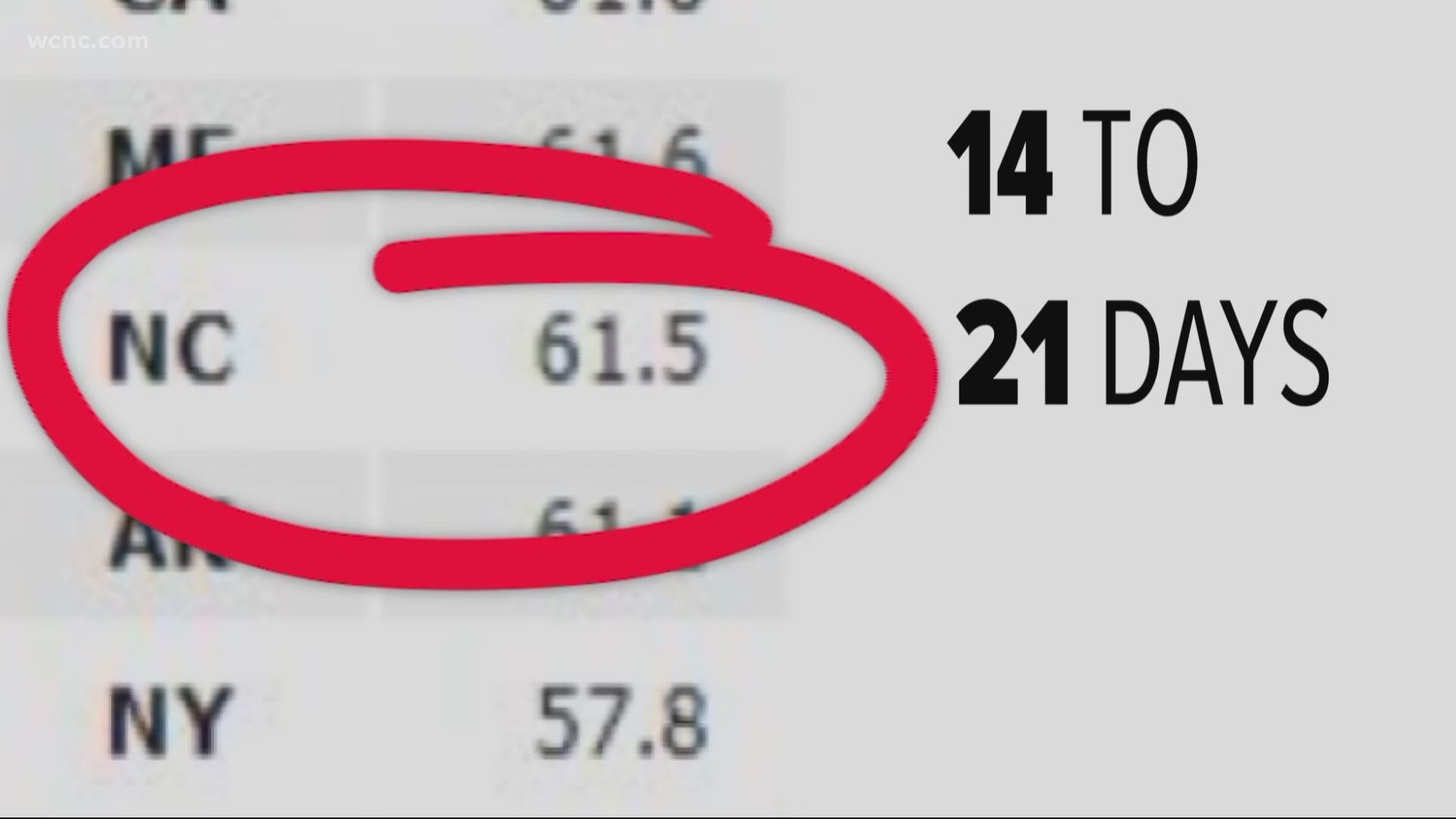 CHARLOTTE, N.C. — The North Carolina Division of Employment Security is accepting little blame for delays that have left some waiting months to collect their unemployment benefits.

Instead, during a recent oversight committee meeting, the head of DES largely critiqued unfamiliar users encountering an overwhelmed system.

"I wouldn't classify it so much as a failure," assistant secretary for employment security Pryor Gibson started to tell lawmakers during the recent meeting. "Let me back up ... In hindsight, in my estimation only, perhaps others have different views, we had a failure and that was not educating our claimants, your constituents, early on on what the UI process was completely."

DES continues to attribute delays to the massive volume of calls, the creation of six new unemployment programs in 2020 alone and the large number of first-time filers, many of whom had difficulty with the online system. Gibson said those factors resulted in complex claims that sometimes required more time and resources to sort out.

"Our staff wants to approve every single one of your constituents' applications, but by state and federal law we can't, because there's discrepancies in the information," Gibson said.

Federal data shows, during several months in late 2020, more than one out of every 10 people who applied for jobless benefits in North Carolina waited as long as to 70 days before receiving their first unemployment check. Despite some recent improvements, federal data shows North Carolina finished the year ranked 43rd in the country when it came to timely payments.

See how other states compared to North Carolina

The numbers would likely be worse if it weren't for journalists and lawmakers alerting the state of specific cases that seemingly fell through the cracks.

"Why does it take a phone call or email from a journalist or lawmaker to DES to pry loose a person's unemployment?" WCNC Charlotte Defender Nate Morabito asked Gov. Roy Cooper. "Why can't regular people get their money without having to turn to us?"

"Well, that shouldn't have to happen and our [Division of] Employment Security has gotten out millions of dollars to thousands of people," the governor said, stopping short of answering the question.

RELATED: 'It was like winning the lottery' | Man finally gets unemployment help after suddenly losing Extended Benefits

WCNC Charlotte has helped people collect more than $31,000 in unemployment in recent weeks, and those people are convinced that without our help, their checks would still be held up. Emily Partin, for example, said she received $2,800 after she emailed WCNC Charlotte.

"I'm just really grateful," she said. "I appreciate all of your help."

The pandemic overwhelmed other states too, but federal data shows most states found a way to deliver money faster than North Carolina where only roughly 61% of people received their first payments within 14 to 21 days in 2020. The data show DES was at its best nearly a year ago.

"Despite the challenges, DES has improved the timeliness of payments during some months of the COVID-19 pandemic, such as in March and April 2020," the agency said in a statement.

See how timely payments were to North Carolinians.

"No one should ever have to contact someone else to help them," he said. "Your help solved a lot of my problems."

He filed in North Carolina, but previously worked in two different states, which complicated his claim. He said it took North Carolina four months to identify and communicate the problem.

"It has been a true blessing because I was like struggling really bad," he said of finally getting his money.

DES insists it continues to make changes to speed things up but once again refused to respond on-camera about it.

"We know that we need to work on timeliness," Gibson told lawmakers during the committee hearing.

While the agency continues to avoid an interview with WCNC Charlotte, DES couldn't escape accountability when Gibson stood before the oversight committee, including one member who urged Gibson's team "to be the very best in the nation."

"It's going to take us a little while to get where we need to be, but we're on a doggone good path to get there," Gibson said.

Although WCNC Charlotte continues to hear from people almost daily who need help, DES said most people get their money by reaching out directly to a call center agent.

"The COVID-19 pandemic has created unique challenges in states around the country," an agency spokesperson said. "DES is focused on helping people receive the benefits for which they're eligible as quickly as possible, while also preventing fraud and abuse in the system. We are continually improving our processes and our customer service to help those in need of assistance."

If you have an issue similar to this and would like help, email your story to money@wcnc.com.