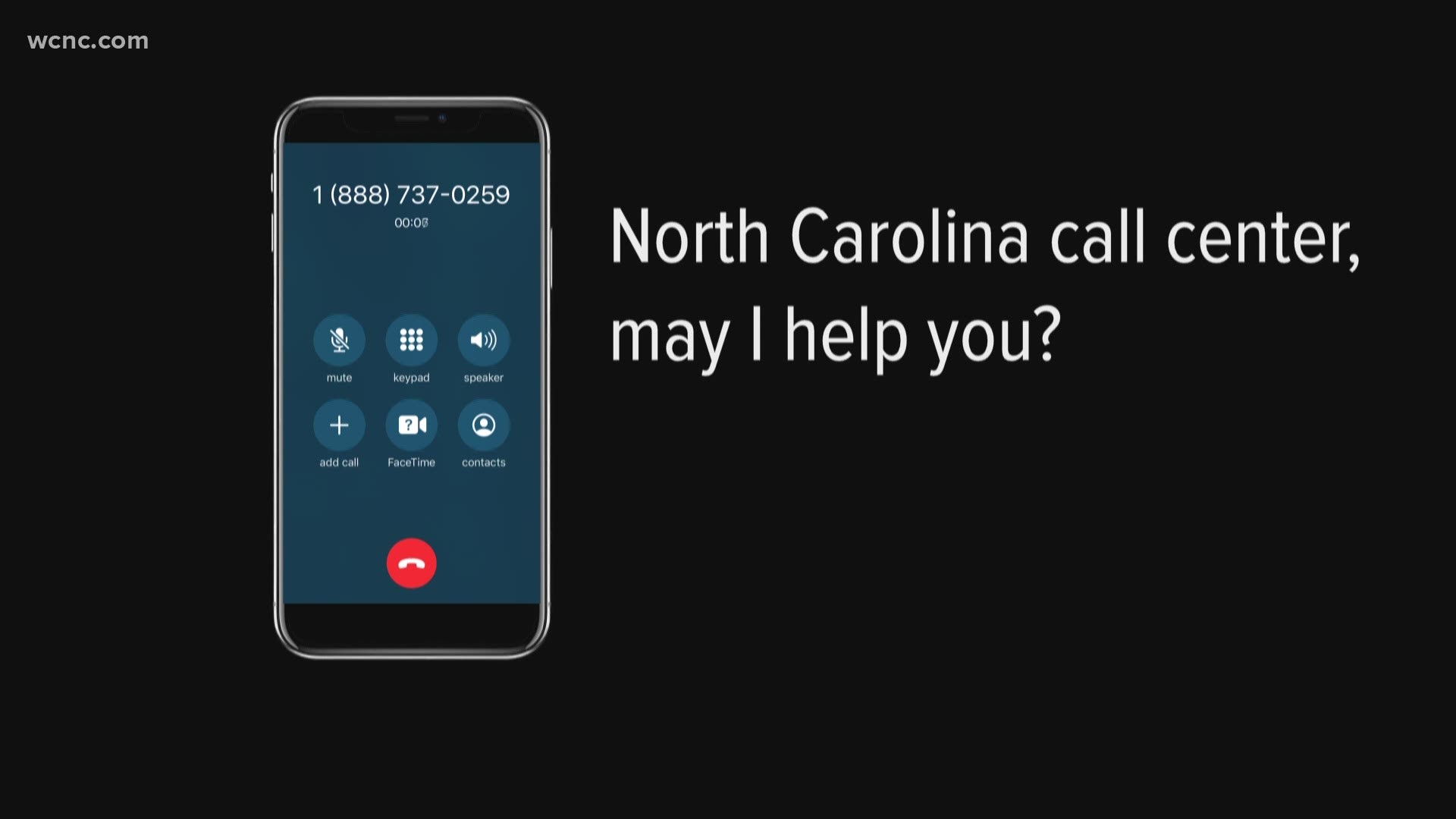 CHARLOTTE, N.C. — Leading up to the removal of the head of North Carolina's unemployment agency in May, newly-obtained emails show the state received hundreds of thousands of calls some days about jobless benefits.

Internal documents reveal "an unacceptable" number reached recordings telling people to call back later, while half of all calls ended up transferred to a Division of Employment Security call center that employed just 100 agents.

An internal email identified more than 294,000 calls that received a busy message on May 18 alone.

"The real bottleneck is when humans need to be involved in the process," a draft DES action planned conceded in May.

That plan, still evolving at the time of Assistant Secretary Lockhart Taylor's removal, placed an emphasis on increased training, more credentialed staff, improved customer service, and a special queue for calls five weeks and older to be "handled with urgency."

"At present, two call centers are providing agents to respond by phone to claimant and employer requests for assistance and information," the draft said. "A contract call center operated by a commercial provider, Maximus, has a staff of 1800 agents available at varying levels throughout a twelve-hour day Monday-Friday as well as hours on Saturday and Sunday. DES operates a call center with a staff of approximately 100 agents available at varying levels throughout a twelve-hour day. At present, high daily call rates ranging from 40,000 to over 200,000 calls (consisting of multiple calls from a smaller number of callers) are resulting in an unacceptable number of calls reaching only a message directing the caller to call back later, a busy signal in effect. As of now, all initial calls are routed to the Maximus call center. Of the calls reaching a Maximus agent, currently over 50% end up being transferred to the DES call center for an effective response to the caller's request. Of these transfers to DES, only a small portion reach an agent for issue resolution."

Federal data previously revealed North Carolina was among the worst in the country for getting critical benefits to the unemployed in a timely manner. WCNC's reporting also found only one out of every seven DES employees were qualified to fix complicated claims.

RELATED: Still no $1,200 stimulus check? Final deadline approaches to get your money in 2020

Taylor's personnel file shows Gov. Roy Cooper technically reassigned/transferred him to a public director position within the agency, which dropped his salary by $26,000 or 21%.

EDITOR'S NOTE: After DES saw WCNC's story, they passed along information about improvements that have been made since the spring. Here are the improvements according to DES:

After the surge in unemployment claims that began in mid-March due to the COVID-19, DES had to act quickly to improve its processes, technology and staffing levels to respond to claimant inquiries. DES has made significant improvements in its ability to provide customer service since the beginning of the pandemic.

- Call volumes have been steadily declining over the last five months. Call volume is currently 80% lower than what it was at the beginning of June.

- Most days, 0% of callers receive a busy message when calling the call center. Exceptions typically occur on Mondays, when call volumes are consistently highest.

- The average hold time to connect with a customer call center representative is less than a minute on most days. Exceptions typically occur on Sundays due to shorter working hours that day.

- The call transfer rate has been significantly reduced. Since June 1, the transfer rate from call center agents to staff with more advanced skills has decreased from 25% to less than 1%.

Several factors have contributed to these improvements, such as:

- The call center platform has been upgraded to a more modern cloud-based system.

- The backlog of pending claims created early in the pandemic has been resolved.

- The volume of incoming claims has decreased.

DES has also made several customer service enhancements to provide quicker and more efficient responses to claimant requests through means other than a call to the call center.

- Claim Status Updates: Claimants can get updates on the status of their claim online or by phone at any time. These options, implemented in late May and early June, allow claimants to check their claim status and find out if they need to do anything to help their claim move forward in the process.

- Chat Feature: The chat feature went live on the DES website on May 8 to provide claimants a convenient option to connect with an agent online.

- Call Back Option: Starting in mid-May, people calling the Customer Call Center were given the option to select a call back from an agent, rather than waiting in a hold queue for assistance.

- Claimant ID Recovery: Initially, DES received a large volume of requests for PIN/password help from people setting up online accounts that required a staff member’s assistance. DES implemented a self-service feature in early May that allows a user to quickly recover account information by email or through verification questions.

DES provides continual training and updates to its call center representatives as we administer seven different unemployment programs. We will continue to monitor trends and information about potential new programs to ensure we maintain appropriate staffing and training to assist claimants and employers.