The county cites rat infestation for the order. In a video sent to Queen City Nerve, you can see more than a dozen rats scurry, as a tarp on the ground is pulled up. 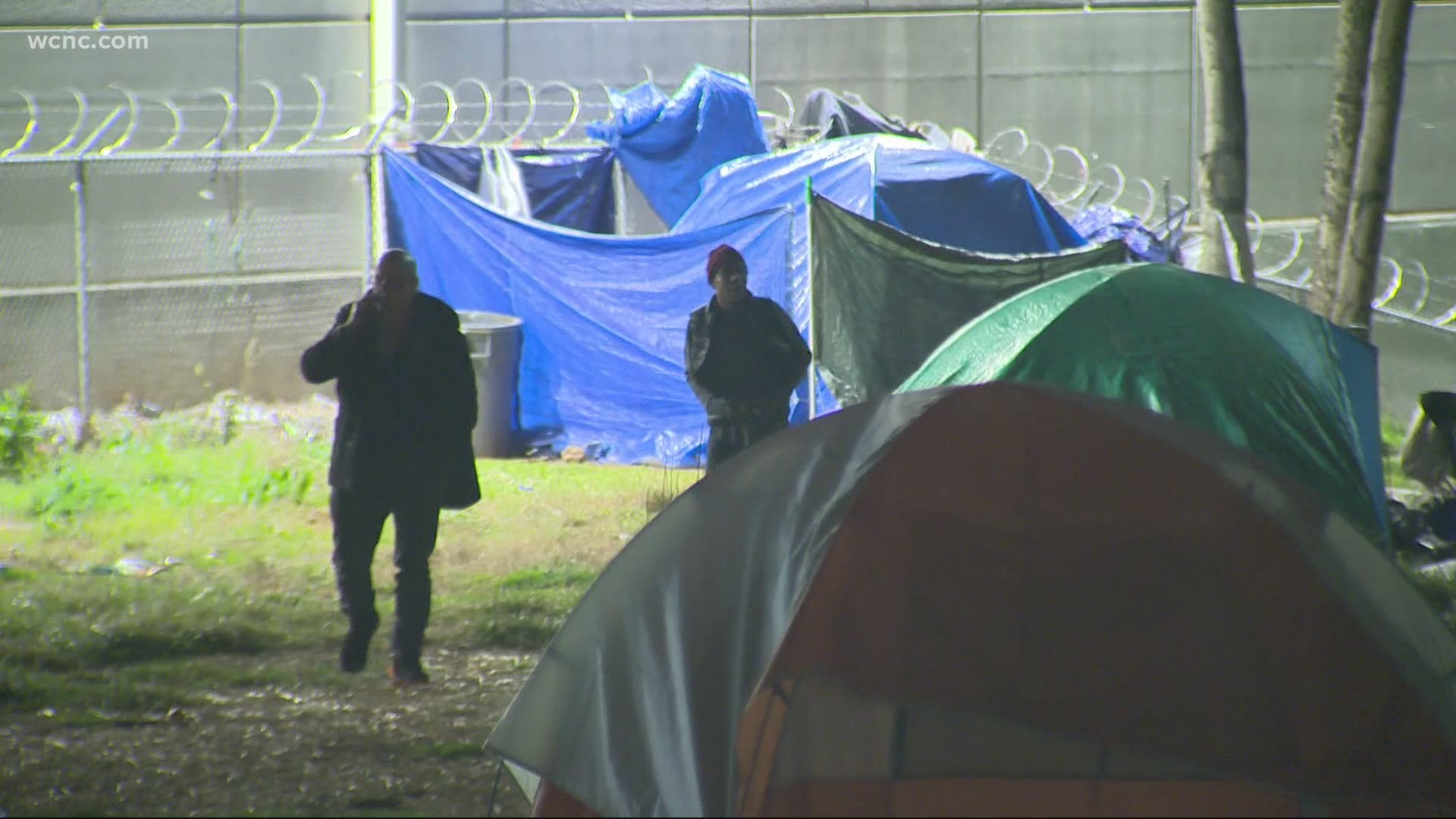 CHARLOTTE, N.C. — Volunteers and county officials were on the ground in Uptown’s Tent City Wednesday, taking a tally, and looking to see how many would be interested in a free hotel stay.

This, after the county, issued an abatement order Tuesday ordering everyone to vacate the Encampments by Friday at 5 p.m. An Abatement of Imminent Hazard Order is a tool available to Public Health to require immediate action to protect the public’s health.

Mecklenburg County officials said they first received a complaint regarding the potential health issues at the Encampment in mid-January. Since then they say Mecklenburg County Public Health Environmental Health staff have worked with the City of Charlotte, the homeless provider community and the business owners to clean up the site and assure that it is safe for residents.

"Nobody wants to be out here," said Shannon Hodges, a woman who lives in a tent at the encampment. "At the end of the day, we're all human. But sometimes we feel like we're less because of our situation"

But those officials said conditions worsened significantly over the last two weeks, and say a growing rodent infestation was recognized late last week. In a cell phone video said to be taken in January, sent to Queen City Nerve, you can see more than a dozen rats scurry, as a tarp on the ground is pulled up.

“There they are,” you can hear a man on the video exclaim.

"It's been pretty bad," Hodges added. "We had to move over there because it was such a bad rat problem over here," she explained as she pointed to her tent under I-277.

“The second issue is for the broader community and the opportunity for these rats, these rodents to migrate into other parts of the community,” said Harris.

According to the Centers for Disease Control and Prevention (CDC), rodents spread over 35 diseases to humans, both directly by coming in contact with rat feces or urine and indirectly when a person is bit by a flea or mite, which has fed on an infected rodent.

Harris said living among them is a clear threat to public health.

"I feel like I'm not even a person," said Hodges.

So, what’s causing the infestation at the encampment? Experts said the leading cause of rat infestations is food. Walk around the encampment and you’ll see an abundance on the ground, from apple sauce cups to discarded leftovers.

County staff and community partners are at the North End Encampment to help connect ~150 residents with shelter and resources. Learn what's available to those residents and how to help » https://t.co/WD7qex49QN https://t.co/3jXCQtivcq

A majority of the food, donations from the community, which some said has turned good intentions into a problem for those who now must vacate by Friday.

“It’s not only the homeless having to be responsible but we can’t create the mess for them and then cause them to get relocated,” said Heath Burchett, who leads Watchmen of the Streets, a non-profit helping homeless neighbors in a number of North Carolina communities, including Charlotte's Tent City.

“We are positioned to help make sure that everyone that is impacted by the abatement order has a safe place to go if they choose,” said Karen Pelletier, a business manager for Mecklenburg County Community Support Services.

Pelletier was on-site Wednesday distributing fliers to tent-city residents making them aware of the abatement order, and the options available to them.

She said the county is making 80 hotel rooms available for Encampment residents who will now be displaced. She said the rooms will be free for the next 90 days.

In addition to free meals and laundry services, Pelletier said there will also be staff on-site to support residents with everything from mental health services to substance abuse treatments to help find more permanent housing.

RELATED: Here's how you can help Charlotte's 'Tent City' this Christmas

“One of the things and why I am down here today is helping to kind of get a count, should we plan on 20 people or 120 people?” she said.

Once a headcount is determined, Pelletier said the county will be on-site offering free COVID-19 testing and said non-profits have stepped forward to offer free transportation to the hotel.

WCNC Charlotte emailed Mecklenburg County a number of questions since a news conference wasn't scheduled until Thursday at 10 a.m. They did not answer all of them and we will be following up during the press conference. 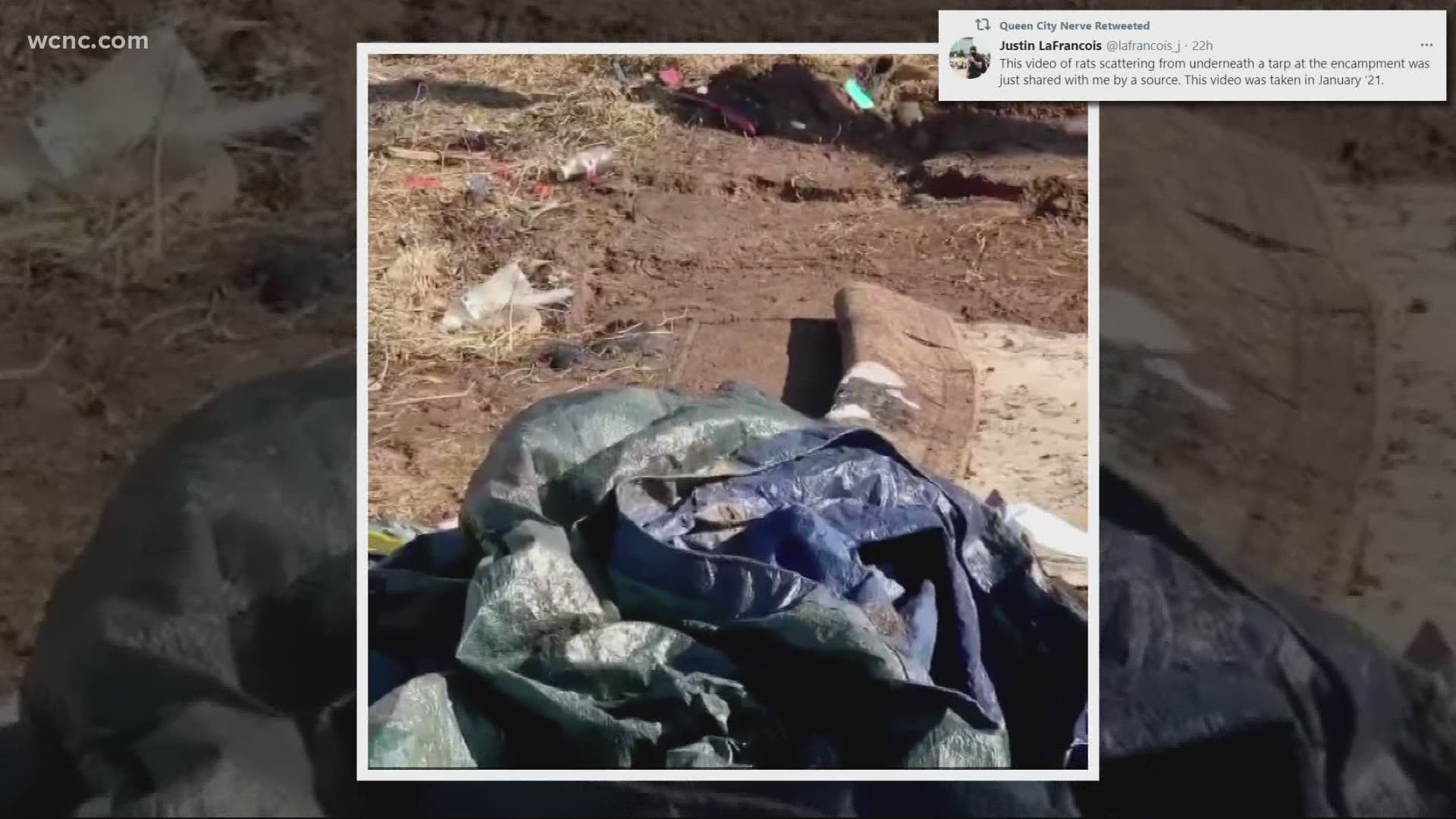 “If someone tests positive, we have a resource for them and we’ll help them get there to safely isolate or quarantine, but they’re not going to lose their spot at the hotel. We don’t want people to have to choose,” Pelletier said.

The county said the COVID-19 vaccine will also be offered to all aged 65 and up who stay at the hotel.

Hodges is planning to take the county up on its offer for the hotel room.

"We don't know where we're going yet, but we're going somewhere inside and warm," she said. "It's better than being out here in the cold."

Part of the abatement order mandates that the property owners clean up their properties so that rodent eradication can begin. The county said those properties include:

“Not everyone is going to want to come to shelter and that is their choice. They have the right to do that,” said Pelletier.

The county said they are currently counting to see how many of the estimated 150 residents of the encampment will take them up on the offer.

WCNC Charlotte also reached out Roof Above, who issued the following statement:

Late Tuesday afternoon, we were extremely surprised to learn about the short 72-hour window for clearing the North End Encampment. We will continue our concentrated efforts to engage with and support our unsheltered neighbors and partner with others to seek immediate alternatives for all those who are being impacted.  -Roof Above