After the video was widely shared, community members took to the streets of Rock Hill demanding answers surrounding the arrests of Ricky and Travis Price. 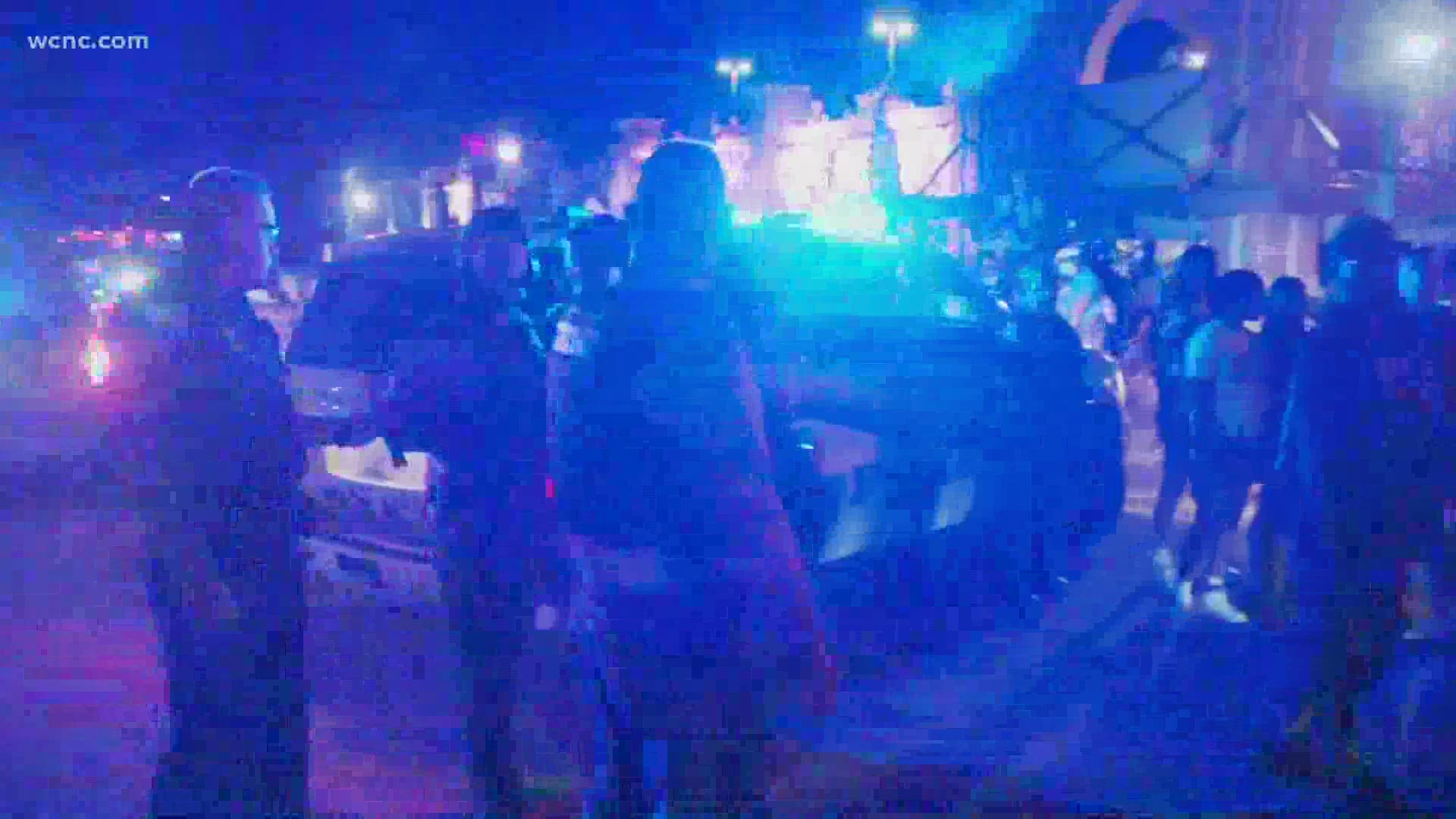 ROCK HILL, S.C. — Editor's Note: On July 8, the charge against Travis Price was dropped, and the Rock Hill Police Department announced one of the police officers involved had been fired. The announcements were made the same day the York County Solicitor's Office released bodycam videos showing the viral arrest.

Dozens of people gathered for a protest outside the Rock Hill Police Department Wednesday night after a Facebook video of what appeared to be a violent arrest went viral.

The Facebook video, which has been viewed over 96,000 times, showed a traffic stop near a gas station on Willowbrook Avenue in Rock Hill. During the video, one of the men, identified as Ricky Price, was thrown to the ground and punched multiple times by officers.

On Thursday, an attorney representing the family said Price suffered a broken nose and was in a wheelchair.

"There is no reason for the level of force we saw on that video yesterday. There's no reason for that," Bamberg said. "Law enforcement through they broke the law, decided to arrest and them and decided to charge them, but somehow they forgot just because you thought someone broke the law that you get to punish them in the process and that's now how things work here in America. You're innocent until proven guilty."

WCNC Charlotte has reviewed the video. Viewer discretion is advised due to material that may be hard to view.

On June 23, shortly before 2 p.m. officers pulled over a 2017 black Ford Mustang at a Rock Hill gas station.  Authorities said the driver, Ricky Roderick Price, made an illegal turn and changed lanes unlawfully.

In a press release, the Rock Hill Police Department said Ricky was heard on his cell phone, allegedly with his brother, Travis Price as officers began to approach the vehicle. Based on Ricky's previous interactions with officers, a call was made for a K-9 to conduct a vehicle sniff, police said.

While searching the vehicle, officers said they located two bags of marijuana hidden in the driver's door panel and also located a 9mm pistol in the back of the vehicle. After the locating of the bags, Ricky was placed under arrest and in handcuffs. 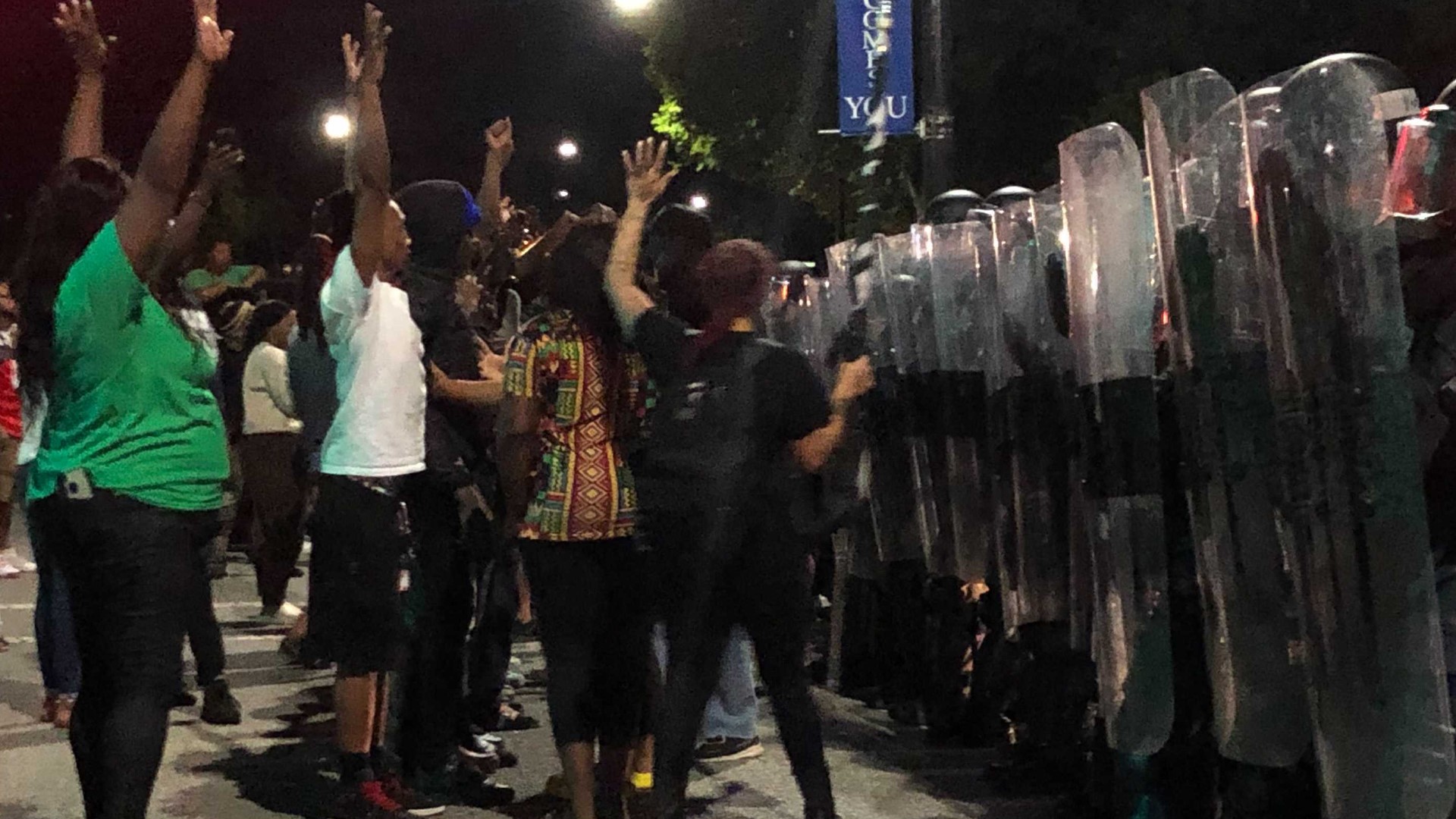 As officers worked to place Ricky in custody, Ricky's brother, Travis Price arrived on the scene and approached officers, according to the release.

At the same time, as other officers collected jewelry from Ricky, he requested his jewelry items be passed to someone else on the scene. According to officers, as they worked to remove his handcuffs in order to remove his jewelry, Ricky attempted to flee and threw several punches; one of those punches struck an officer.

The police department said the K-9 that officials said was called to the scene to conduct a vehicle sniff was then "deployed as a display of force to gain compliance." As the handler maintained control of the K-9, Ricky continued to attempt to escape from officers, according to the release.

As the struggle ensued and officers continued to gain control of Ricky, Ricky and several officers fell to the ground of the gas station parking lot. While on the ground, one officer delivered several punches to Ricky's upper thigh. Police said the officer was aiming for the Common Peroneal Nerve to gain compliance. According to officers, the punches had no effect and Ricky "continued to resist." The officer then punched Ricky again, this time in the nose, causing him to bleed.

At this time, both Ricky and Travis were taken into custody.

The Rock Hill Police Department said after both were in custody, "Officers rendered aid following the punch and EMS was called to respond." Ricky was put in a patrol vehicle to meet EMS at the Law Center. From there he was transported to Piedmont Medical Center for treatment.

According to the release, while removing Ricky from the vehicle, officers located a Crown Royal bag containing crack cocaine where he was seated.

Travis was taken to the Rock Hill City Jail and charged with Hindering Police.

Police said the K-9 on the scene was solely used as a display of force and did not bite either Travis or Ricky. While officers did punch Ricky multiple times, they did not deploy any weapons or use Tasers against either him or Travis.

An Internal Review of the incident is being conducted, the Rock Hill Police Department said.

After the video was widely shared, community members took to the streets of Rock Hill demanding answers surrounding the arrest of Ricky and Travis Price.

Protesters told WCNC Charlotte it doesn't matter to them why the brothers were arrested, they believe law enforcement used excessive force.

"That could have been me," one man said. "They could’ve been seeing me getting beat up on camera like that."

WCNC Charlotte's Hunter Sáenz spoke with 10-year-old Zion Price, who identifies himself as the son of Ricky Price. Zion could be seen holding a sign holding that read, "Free Red/Travo No Justice No Peace".

Sáenz asked Zion Price what he would want to tell the police department.

Shortly before 11 p.m., a fire was set outside the Rock Hill Police Department, where protesters were still gathered. The fire was put out shortly after, then reignited.

WCNC Charlotte's Hunter Sáenz reported a lone officer drove near protesters to escort firefighters to the fire in order to put it out. At one point, Sáenz saw a person throw a rock at the patrol car.

Around 11:30 p.m. Wednesday, Rock Hill Police Department announced the protest was an unlawful assembly and called for people to disperse.

Around 11:38 p.m., protesters were seen gathered near a line of SWAT officers in riot gear. Protesters were later heard shouting," No justice, no peace."

"I want my grandkids not to have fear of walking around these streets," one woman told WCNC Charlotte earlier in the evening. "I don’t want them to fear driving around, a car being pulled over -- because we're already just in fear of just waking up and being Black. We had to have that talk with our children -- not just the boys, now we have to have it with the girls too."

Protesters and police have distanced a little but both sides are still out here. Protesters aren’t backing down. Police are telling them to disperse @wcnc pic.twitter.com/U7m7I4JXyl

Sáenz witnessed rocks being thrown at police, as well as a few protesters who have attempted to keep space between officers and protesters to keep the peace.

Around 12:20 a.m., a leader of the protest used a megaphone to tell other protesters to go disperse, go home, and plan to return Thursday. Following this, protesters started dispersing from the area.

Protesters will return to the same location outside of the police station, at Black Street and Dave Lyle Boulevard, at 8:30 a.m. Thursday.

"It's a big day tomorrow, the organizer said.

Protest leader tells everyone to disperse and be back in force tomorrow. @wcnc pic.twitter.com/qkCK9WfhKM

The Rock Hill Police Department held a press conference Thursday afternoon to discuss the arrests of both Price brothers.

Police chief Chris Watts reviewed the details of their narrative, re-affirming Ricky Price tried to push away from officers to flee, throwing punches at officers after requesting to be uncuffed to remove jewelry. Watts says a taser was never used, and a K-9 officer on the scene was held back and never used against either brother.

Watts did confirm officers did target pressure points on Ricky Price's body, and that officers did hit back. One officer did hit Ricky Price in the face, which caused bleeding. Watts noted two officers involved in the incident are on administrative leave, and that the South Carolina State Law Enforcement Division (SLED) was requested to review officer conduct in the name of impartiality.

Dr. Norma Gray with the Rock Hill chapter of the NAACP also spoke at the conference, saying concerns have been addressed with the police department in a meeting. Gray says after reviewing the video footage, she said it would take anywhere from weeks to months to fully determine what happened. However, she noted the viral video was not able to capture what happened to Ricky before he was taken into custody. She asked the community to give police and community leaders time to develop answers and investigate. She noted the NAACP had been working "hand-in-hand" with Chief Watts for seven years, and reiterated her request for calm. 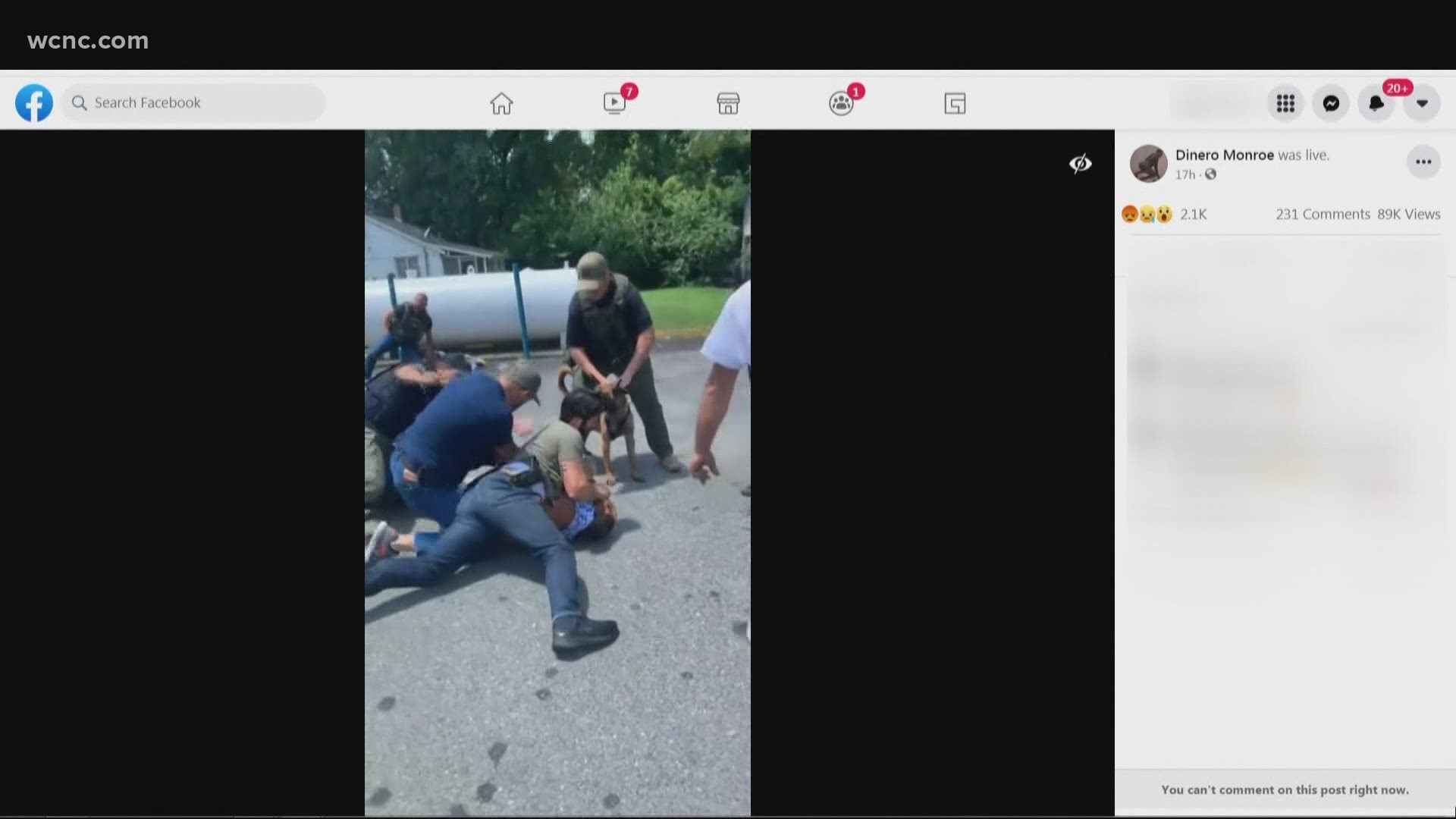 Both Watts and Gray called for peaceful protests, with Gray noting the officers who would be monitoring protests would not be the same officers that were on the scene of Price's arrest. Watts says he welcomed peaceful protest and was aware of possible action Thursday night.

When asked about releasing full footage from the body cameras, Watts said he wouldn't release it immediately. He has reviewed the footage, but said he also wanted to find on-scene witnesses to make sure everything was pieced together. He also wanted to speak with the Price family to see if they were okay with releasing the video. He also said the quicker the investigation into the incident can get underway, the better, and that was part of why SLED was requested. 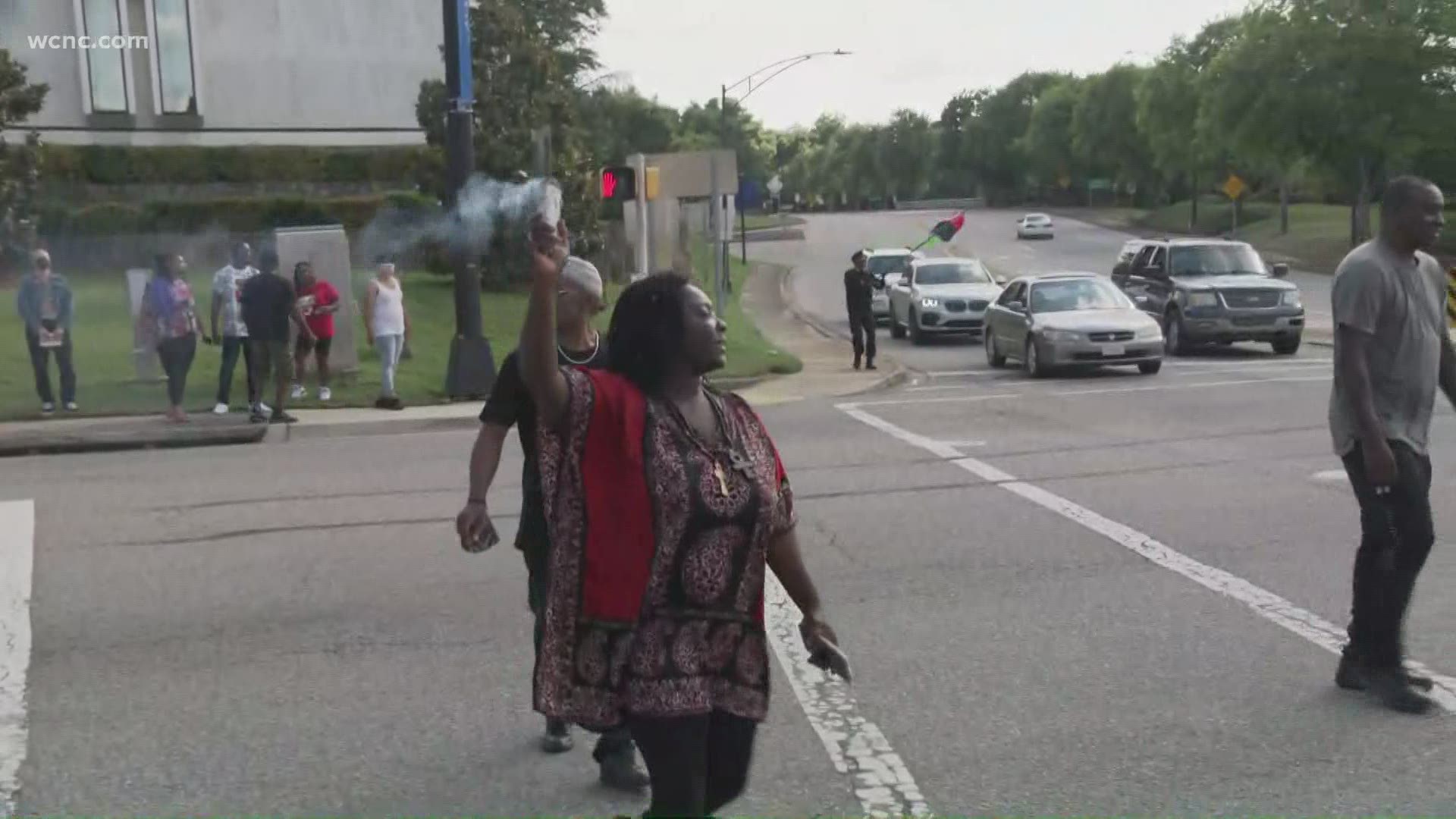 WCNC Charlotte's Hunter Sáenz was present along Black Street in Rock Hill as another protest began Thursday night, shortly after the press conference concluded. While there, Sáenz noted there was a level of understanding between police and protestors. There were initially dueling groups of protestors, but the founder of the Black Lives Matter chapter in Rock Hill said to police as our cameras rolled that the group of protestors apparently riling others up were not affiliated with the chapter. Those actions were also condemned by the chapter.

Protests in Rock Hill after viral arrest WCNC Charlotte is live in Rock Hill, South Carolina as protestors gather near the police department. On Wednesday, a video of an arrest went viral as Rock Hill officers took a man down and punched him. RHPD provided more details in a press conference today, and people are out tonight again. Last night's protests saw a tree catch fire, and tonight already four people have been arrested, including one person charged with DUI and two charged with hindering police. MORE ONLINE: https://www.wcnc.com/article/news/crime/arrest-rock-hill-viral-protest-errupts/275-957c1c8d-2b11-4399-947a-d3220097b3da

Four arrests were initially made during the evening but by 12:55 a.m. a total of 11 people were arrested.

WCNC Charlotte photojournalist Mike Hanson also captured footage of a truck that had hit a vehicle on scene, which was part of one of the four arrests he and Sáenz saw.

The protest action started winding down closer to 9 p.m., but a ninth protestor was arrested around 11 p.m. for setting off two fireworks near police.

While our crews were on scene, we spoke with two protestors who were frustrated.

"They always try to give me the bare minimum, give us what they want us to have," said Joshua Crane. "What we want is the same accountability that they hold us to."

"This is just he said, she said. Show me some proof, okay? And if you really had something against this brother, why as an officer would you put handcuffs on somebody and then take them off?" she questioned. "Come on now. That's like saying 'you know what, I'm going to give you a gun, let me see if you shoot it first'."

WCNC Charlotte has crews in Rock Hill monitoring for updates. Stay tuned for the latest.