Court records show the man took selfies inside the Capitol, including in front of the statue of a former vice president from South Carolina who supported slavery. 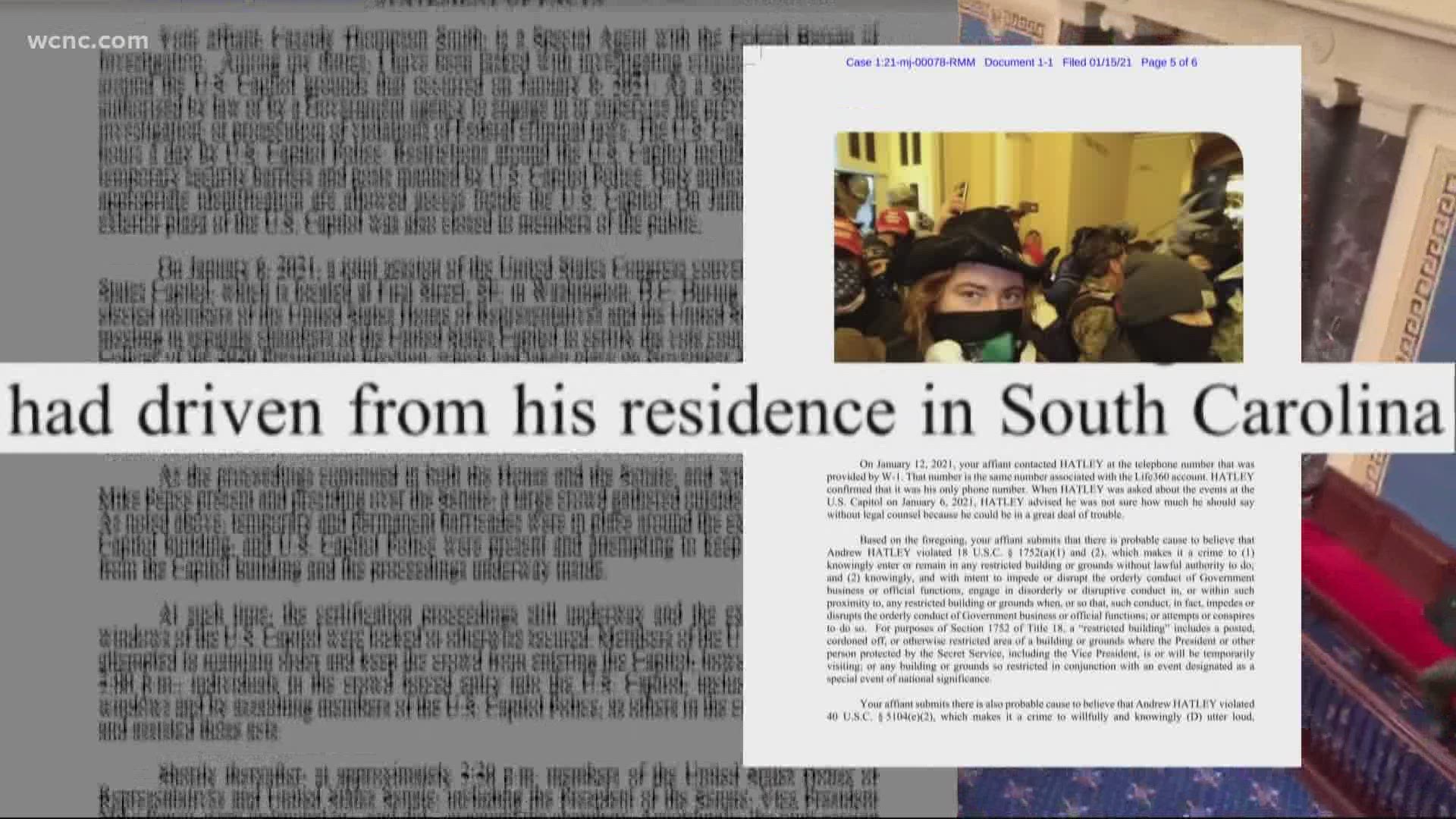 SOUTH CAROLINA, USA — A South Carolina man is facing federal charges for his role in the Capitol insurrection on Jan. 6, according to a newly published federal complaint.

The complaint identifies Hatley in a selfie taken in front of a statue of John Caldwell Calhoun, a former South Carolina member of Congress who fiercely supported slavery, according to Clemson University.

According to investigators, another image shows Hatley in a separate location wearing a green respirator. Federal court records show a witness shared a tip at 4:18 p.m. on Jan. 6 identifying Hatley.

Federal agents said they matched a hat worn by Hatley in a Facebook picture with a photo from inside the Capitol. A Facebook post from Hatley's profile addressed what he said was "false information" about him at the Capitol.

RELATED: Five Charlotte-area men arrested after riot at US Capitol

"It has come to my attention that there was someone who looks like me at the Capitol," the post said. "I'd like to set the record straight. I don't have that kind of motivation for lost causes. I just don't care enough anymore, certainly not enough for all that."

Credit: US Dept. of Justice
Andrew Hatley of South Carolina was charged for his role in the storming of the U.S. Capitol on Jan. 6. Photo courtesy: Federal court filing

Court records show agents also used cellphone application data to confirm Hatley was at the U.S. Capitol Building during the insurrection. He is the first person from the Carolinas to publicly face federal charges in connection to the Capitol attack.

When contacted by the FBI about the Capitol insurrection, Hatley "advised he was not sure how much he should say without legal counsel because he could be in a great deal of trouble."

M. Quentin Williams is a former FBI agent and federal prosecutor. He said the 80 or so federal cases that are already public are just the beginning.

"If you're in the building, there's a case against you," he said. "Within the next, I'd say three to four weeks, you're going to see hundreds of cases. They're just prepping them right now."

The FBI's website lists many more people of interest they need help identifying and tracking down. We know, at minimum, a small number of North Carolinians made the trip to DC. Some of them face state charges, but so far, no one from North Carolina is publicly named in a federal complaint. Meanwhile, every surrounding state is home to known cases. Williams expects that to change.

"That's just the luck of the draw at this point," he said. "I would assume most states will have cases."

If anything, Williams said the people arrested later are the ones who will really lose out, likely identified through the cooperation of early defendants who take plea deals in return for shorter prison sentences.

"You can count on one thing:  those who are in early will get a break," he said. "Those that defy the investigative tools that are being used, try to escape it, try to hide, they're going to be doing more time. Everybody will do time."