Students were asked if they would choose being a Republican or Democrat in a civics class. The answers were publicized, with conservative students being bullied. 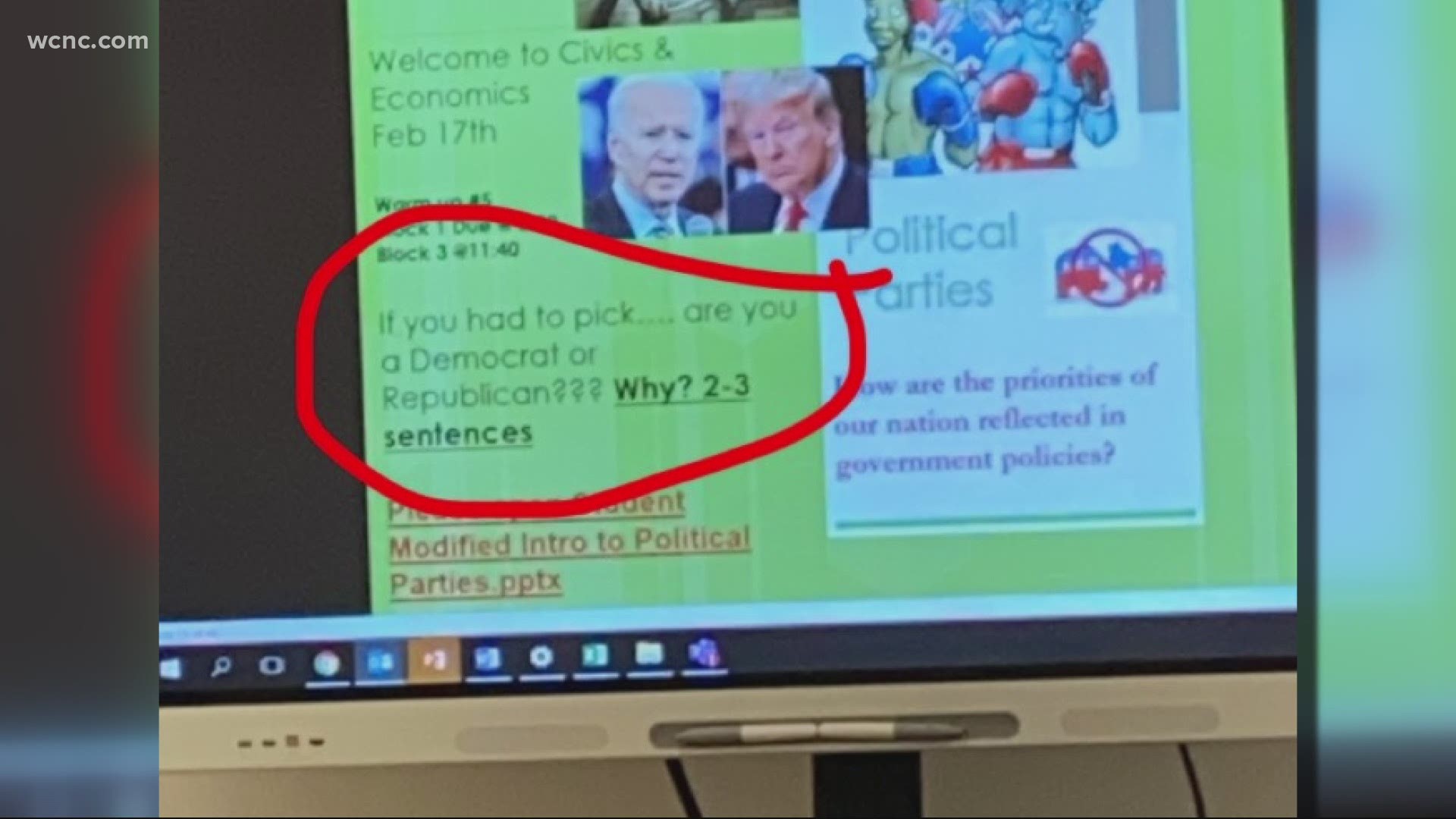 INDIAN TRAIL, N.C. — A Union County mother is calling for change to the curriculum after her daughter was allegedly asked if she was a Republican or a Democrat in a civics class.

During the third week of February, students in a civics and economics course at Porter Ridge High School in Indian Trail were asked, "If you had to pick: are you a Democrat or a Republican? Why?'"

Students answered the question. The answers were then posted for the class to see, the mother said, and her daughter was bullied for being a Republican.

"My daughter was worried. She said, 'I just want to cry,'"  the mother said. "'Everybody is being so mean to me.'"

The mother did not want to be identified, worried about further bullying or threats to her daughter.

"These threats that, 'we'll show them!' Or, 'I can't wait until I see her,'" she said as she explained some of the threats her daughter received after the answers quickly spread around the high school.

Students took pictures of the answers that had the names of the students next to them, according to the mom. It wasn't long before students in other classes began to bully her daughter.

"I think in this climate right now, people are too politically charged up," the mother said. "People's emotions are in this. It's just creating a toxic environment."

She claimed at least one other student received threatening comments after answering 'Republican' as well.

"That teacher put a target, he outed these children," she said.

"Union County Public Schools staff is aware of the parent’s concerns," a spokeswoman for the district said. "The discussion was a part of a Civics and Economics class in which students are learning about political parties. School administrators have addressed this matter with teachers and they will continue to have conversations about best practices for instruction."

This mother spoke with the teacher who apologized multiple times. She said she accepted his apology but she hoped there are lessons to be learned.

"He's in the best position to create peace between people who have different opinions and to kind of bridge the gap, as opposed to creating more division," she said.

She believes party affiliation is a private matter and maintains it should have never been asked in the first place.

"Most of us know that not even adults can get along about this," she added. "I don't know why we would think that teenagers would be more mature about this than we are."

The school district said the school's principal spoke with students about respecting each other and each other's opinions, but did not say if any disciplinary action was taken.

The district maintains that politics is an important lesson to teach high school students and will continue to have it in the curriculum.

The mother of the student who was bullied hopes future lesson plans in civics will start with civility.

"It doesn't have to be a hateful or dangerous environment because someone thinks differently than you," she said.