16 protesters arrested on fifth day of protests in Charlotte 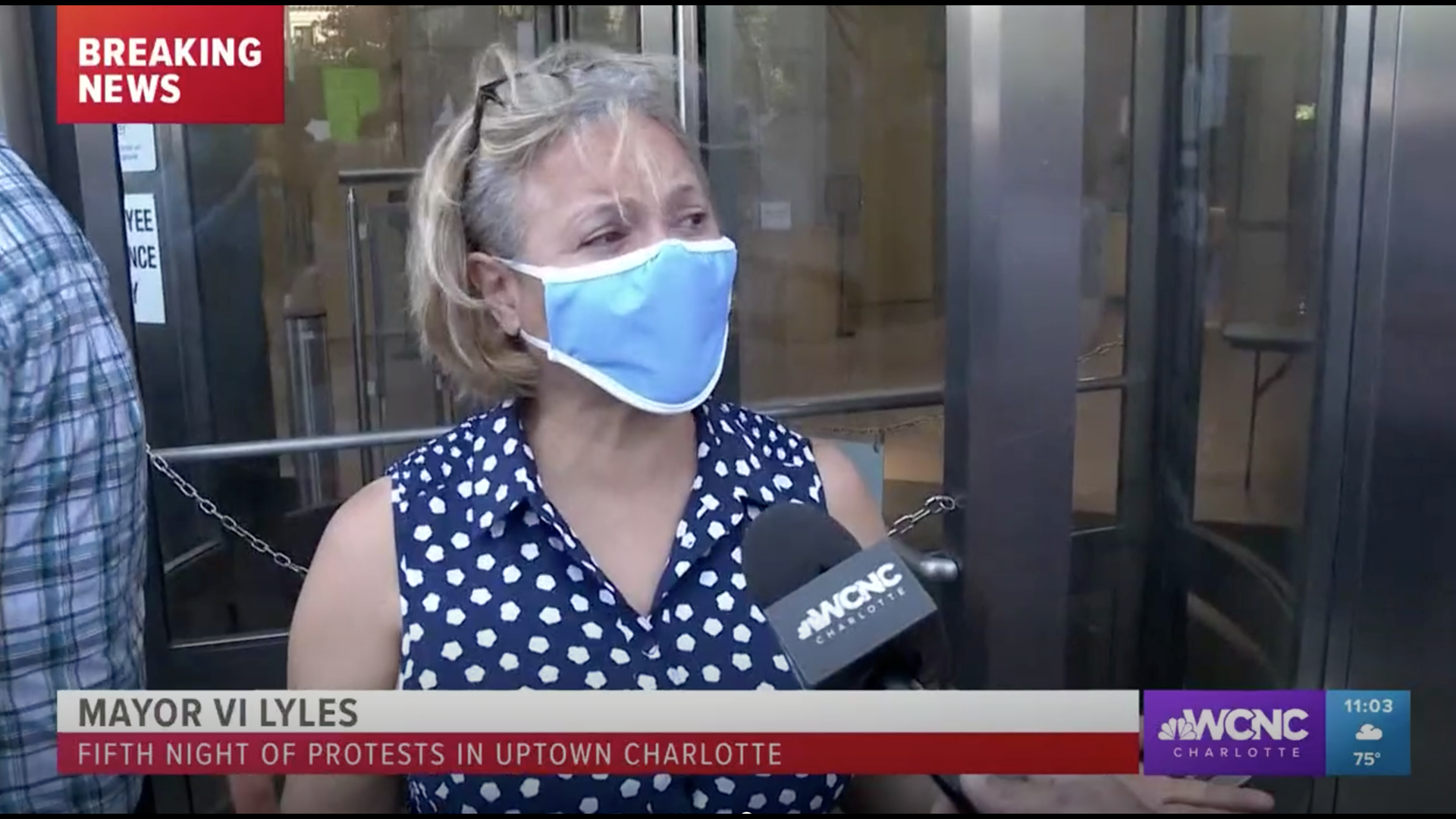 CHARLOTTE, N.C. — For the fifth day in a row, hundreds gathered on the streets of Charlotte to protest the death of George Floyd. A peaceful protest started Tuesday right outside the Government Center. The event, organized by the local chapter of the NAACP, called for peaceful protesting.

The Charlotte-Mecklenburg Police Department says what started as "a lawful protest" took a turn shortly before 9 p.m., when CMPD says several officers became targets for protesters "bent on turning a lawful demonstration into a riot."

In the span of around four hours, CMPD says there were at least 18 incidents where protesters threw objects at officers, nine dispersal orders were issued, 16 protesters were arrested, and three guns — including one assault rifle — were found.

Over the last six days, CMPD says there have been at least 53 reported incidents of officers being assaulted. CMPD also reports that Internal Affairs has received 50 complaints on officers since Friday — according to CMPD, 49 of the complaints were received Wednesday.

Just before 9:30 p.m. Tuesday, CMPD says a group of several hundred protesters had been given multiple dispersal orders due to "violent criminal activity." CMPD says the group marched up 4th Street and a "coordinated operation involving riot control agents" was used to disperse the crowd.

Protesters, however, have said they were acting peacefully during a march when CMPD officers trapped them in a parking garage on 4th Street, using pepper spray and tear gas on the crowd.

An internal review is underway, and CMPD says they have requested an independent review by the State Bureau of Investigations.

In a statement, CMPD said in part:

"There is nothing to indicate whatsoever that there was intentional abuse on the part of our officers. In the interest of accountability, I have requested an independent review of the incident by the State Bureau of Investigation to ensure there is an objective set of eyes to determine if CMPD actions were lawful.

It is regrettable, and something we take seriously. We have an enormous responsibility to ensure all of our operations are carried out with precision.

We as an organization need to learn from this incident, and redouble our efforts to ensure that we’re doing everything we can to keep the community, protesters and officers safe. We are a learning organization and always working to identify opportunities to serve our community better."

What follows are live updates from protests in Charlotte on Tuesday, June 2.

As of 12:20 a.m. Wednesday, only two arrests are known in connection to the Monday night protests, but its possible CMPD will announce more on Wednesday.

CMPD says they are "internally reviewing" circumstances after deploying 'riot control agents' to disperse the crowd on 4th street. CMPD originally said they deployed the 'riot agents' after officers were struck by bottles thrown by protesters. 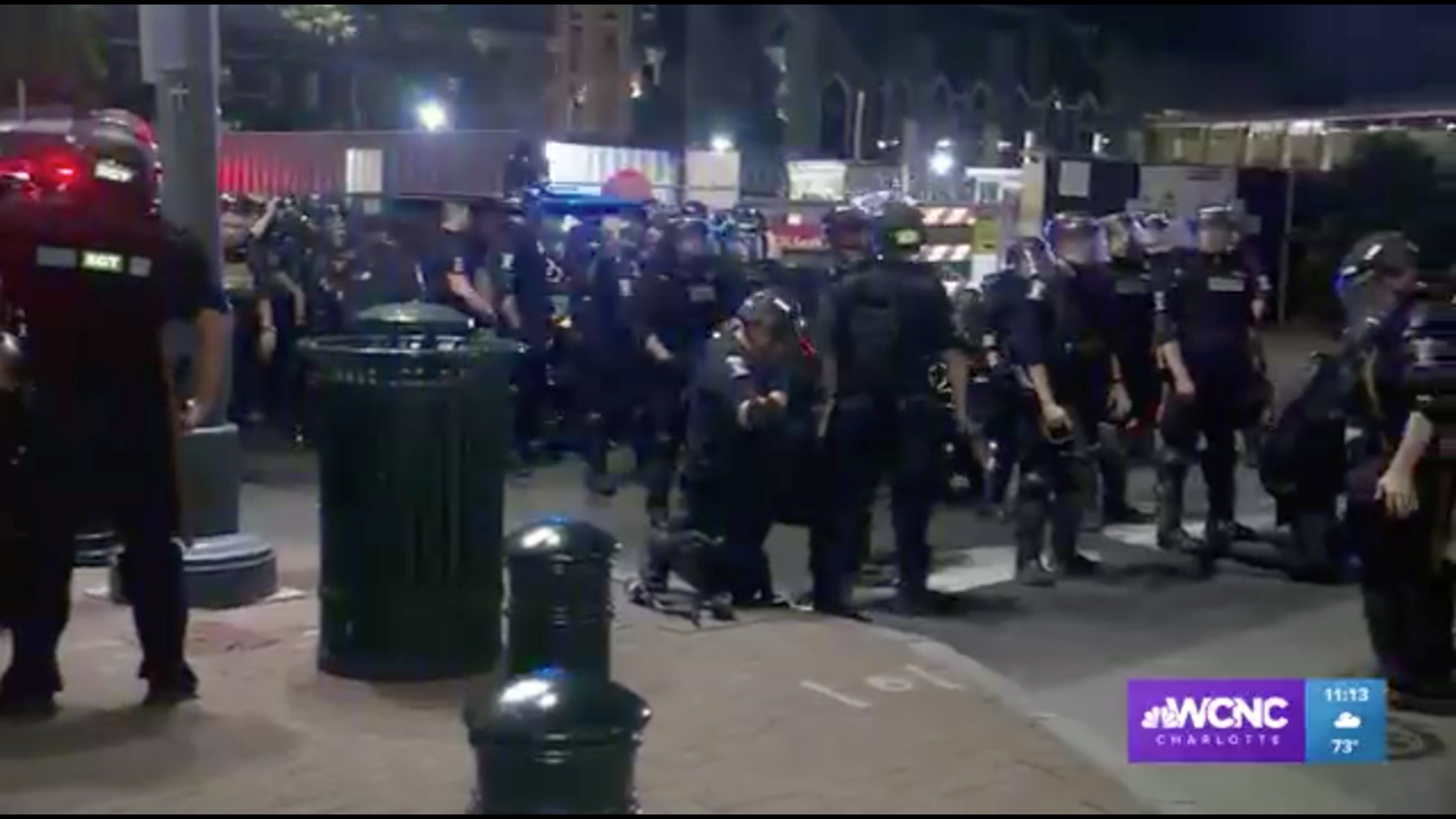 Officers have issued several dispersal orders as bottles are thrown, according to CMPD.

CMPD says officers are deploying 'riot control agents' to disperse the crowd after officers were struck by bottles thrown by protesters at North Tryon Street and 4th Street.

CMPD says a protester arrested in Charlotte had an AR rifle with two 30-round magazines.

A protestor was just arrested with an AR Rifle with two 30-round magazines.

WCNC Charlotte's Brandon Goldner speaks to a reverend who says he got pepper-sprayed by CMPD. His eyes were still watery and red when WCNC spoke to him, but he said he was ok.

He said protesters helped him after the incident. 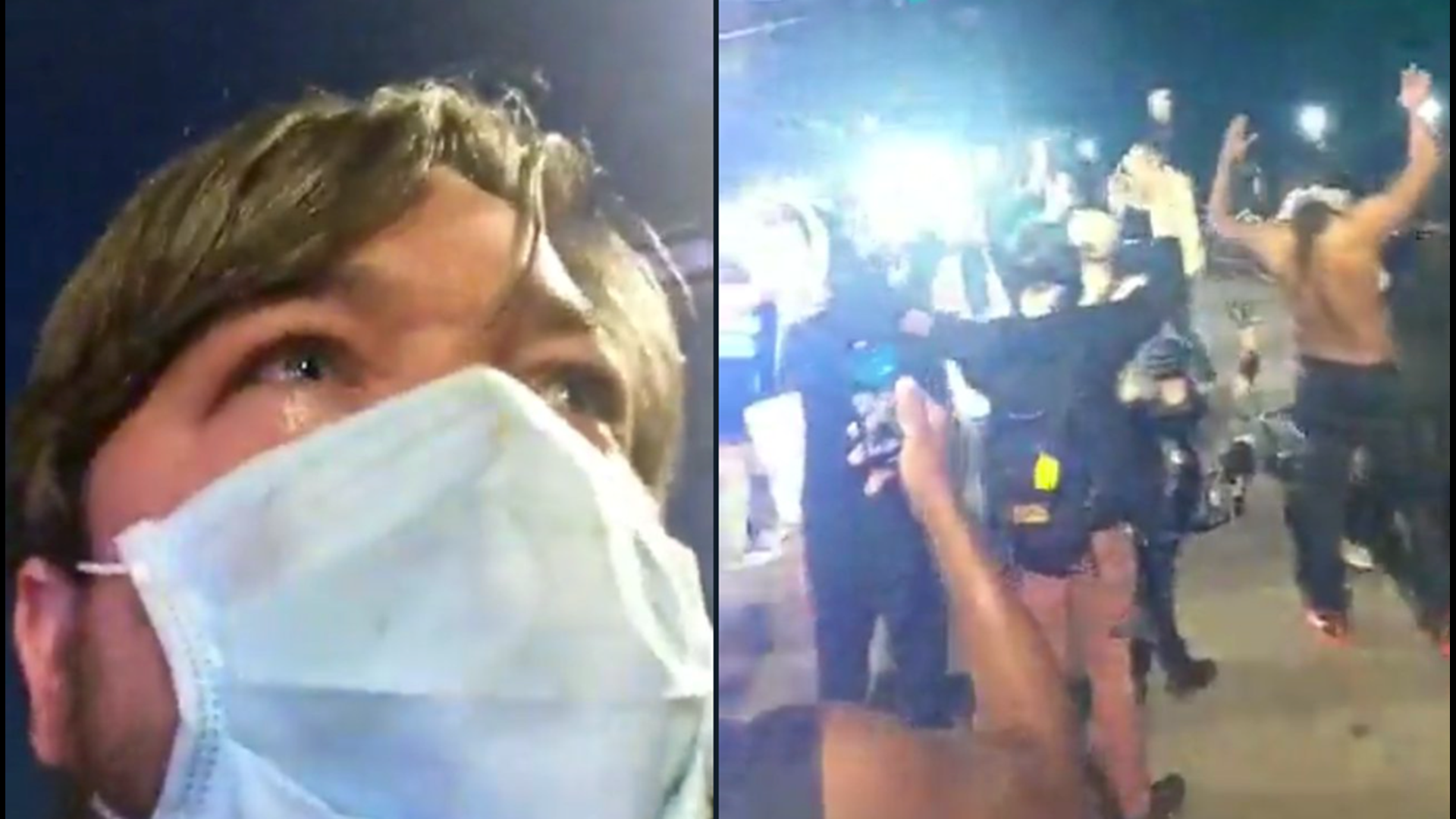 The Uptown Transit Center will be closed for the rest of the night due to the protests, according to CATS.

Around the same time, WCNC Charlotte photographer Lucas Bogg witnessed what appeared to be multiple arrests on East Stonewall Street near South Davidson.

Actually appears as though multiple arrests are happening. @wcnc pic.twitter.com/r3oYu9lyTj

CMPD says they have made one arrest so far. Riot control agents, likely tear gas, were deployed to disperse the crowd of protesters.

Officers have made one arrest. Riot control agents have been deployed to disperse the crowd to keep protestors and officers safe.

CMPD says an officer is being treated at the scene after a protester threw "a chemical agent" at him. Police say protesters have been engaging in "violent behavior" recently, including throwing bottles.

A few minutes later, CMPD said that a group of protesters were shining lasers at bike officers.

Several dispersal orders have been given.

A protestor threw a chemical agent at a bike officer. He's being treated on the scene. Officers continue to encounter violent behavior from some protestors.

As a group of protesters moves through uptown Charlotte, CMPD says a portion of the group began throwing water bottles and fireworks at the officers.

A dispersal order was given.

WCNC Charlotte's Mike Hanson was in the area of McDowell and Trade in uptown Charlotte when a warning of arrests was issued over a loudspeaker.

This is the line right now. McDowell and Trade.

A group of people was seen passing out snacks and water bottles to protesters to help them stay hydrated. The group said after giving resources to the protesters, they would head to the jail to give some resources to the group Charlotte Uprising.

The group also brought masks for those who came to the protest without them.

The Billy Graham Rapid Response Team was seen among protesters in uptown Charlotte. The chaplains had also responded to Minneapolis, where George Floyd died in police custody.

The group of protesters has grown — WCNC Charlotte's Hunter Saenz estimates over 1,000 people — as the group moves toward the Government Center in Charlotte. So far, protests have remained peaceful.

Not that great at estimating but there has to be upwards of a 1,000 people here. Protest wrapped around several blocks when they were moving and are now in front of Gov. Center. @wcnc pic.twitter.com/GtVSk1Rg2c

Mecklenburg County Sheriff Gary McFadden tells WCNC Charlotte's Hunter Saenz he is creating a policy called "duty to intervene" — it would call for deputies to intervene if necessary when another deputy is arresting an individual.

Sheriff McFadden says he thinks if the three other officers associated with the death of George Floyd were arrested, tensions would lower.

"It would bring some tension down from the community, but we have to go further than that," "Sheriff McFadden said. "Officers like myself, sheriffs, sergeants chiefs, we need to stand up one time together and say, 'Please help us, please help us charge these three guys so we can have some normalcy back.'"

#NEW: @MeckSheriff McFadden says a new policy will go into place at his department. A “duty to intervene” policy @wcnc pic.twitter.com/PLyD2TbiKL

Protesters moving through uptown Charlotte stop and take a knee, having a moment of silence to remember George Floyd.

Protestors take a knee and have a moment of silence to honor #GeorgeFloyd @wcnc pic.twitter.com/p1xchDYUdN

Charlotte Mayor Vi Lyles, who was in attendance at the peaceful protest, told WCNC Charlotte she does not believe a curfew should be put in place, even though one would be allowed as part of Charlotte's State of Emergency.

Mecklenburg County Sheriff Garry McFadden, however, told WCNC Charlotte's Hunter Saenz he believes there should be a curfew.

NAACP Charlotte-Mecklenburg organized a peaceful protest outside the Government Center in uptown Charlotte. Following the gathering, many protesters made their way through the streets of Charlotte.

Some protesters can be heard chanting "This is what democracy looks like." 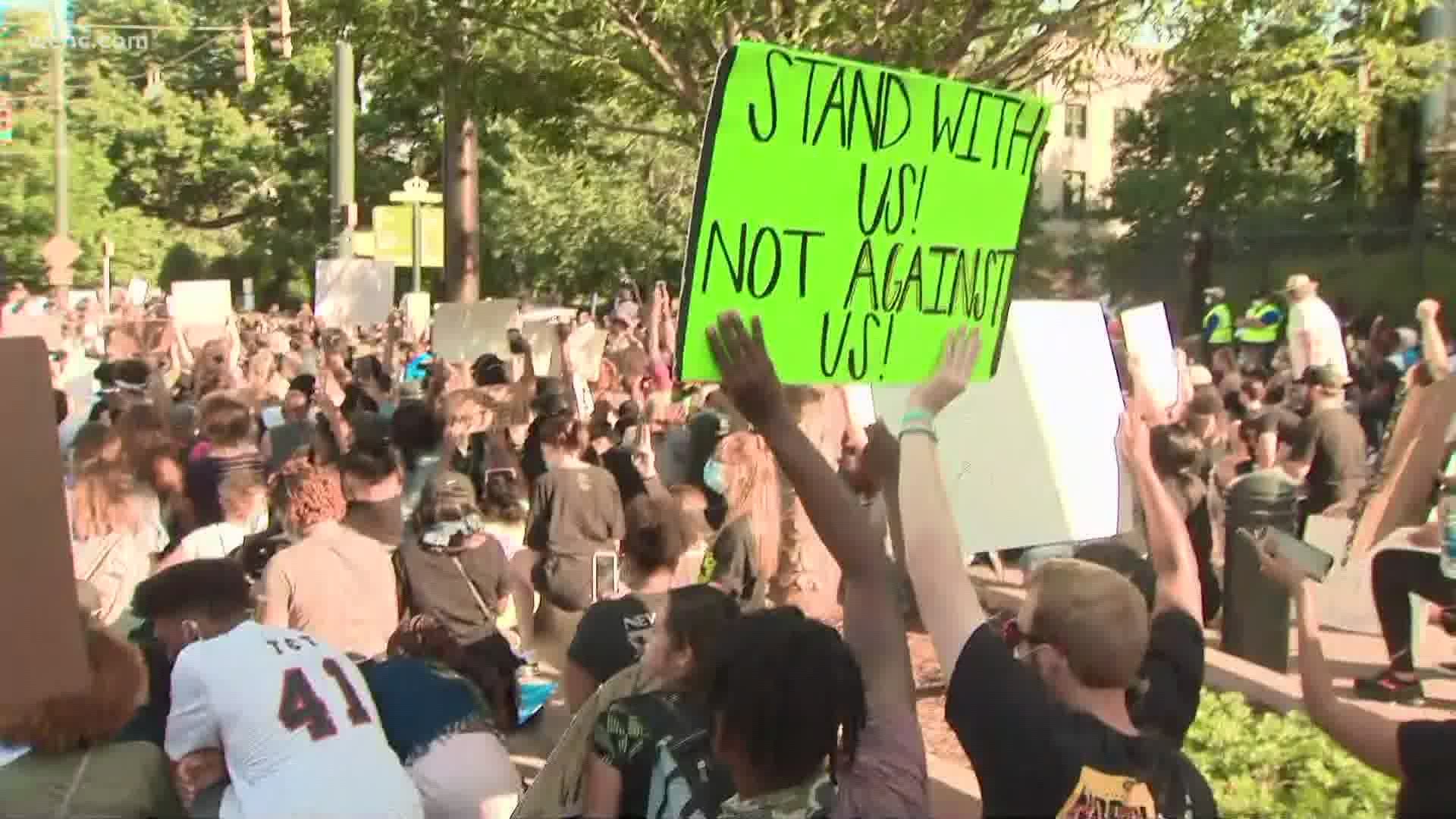 RELATED: Uptown business owner victim of looting during protests: “It was disheartening”