President Trump arrived in Charlotte and signed an executive order with the intent of helping small business owners provide retirement benefits for their employees. 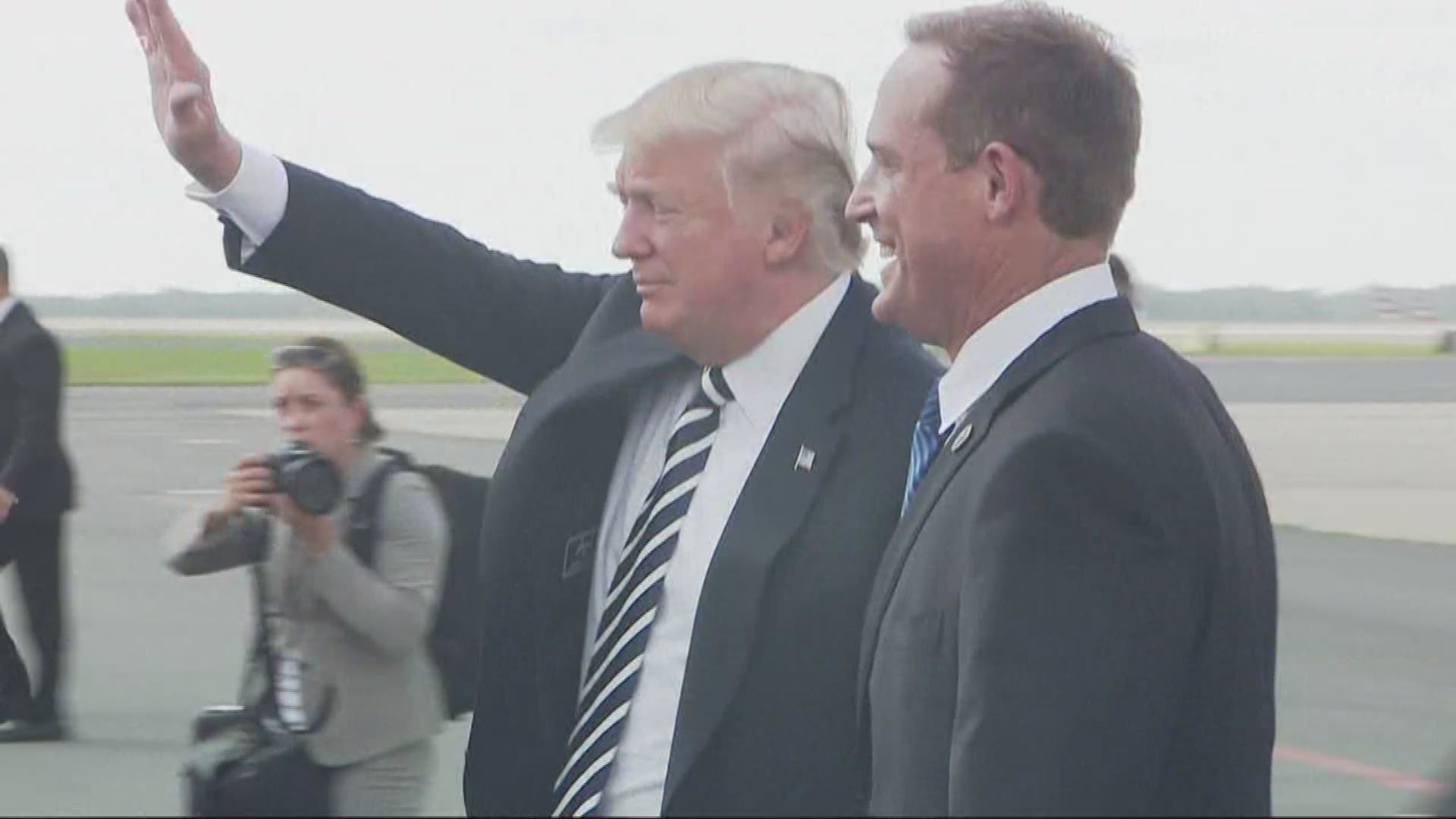 The president's first stop of the afternoon came shortly after he touched down around 2:30 p.m. when he signed an executive order at CPCC's Harris Conference Center with the intent of helping small business owners provide retirement benefits for their employees.

“Today’s historic action will provide new retirement security to countless American workers and their families,” Trump said. “We believe all Americans should be able to retire with the confidence, dignity and economic security that you want."

"I'll sign an executive order to extend the incredible benefits of retirement savings accounts to American workers employed at small businesses across our nation. Our nation pays its gratitude to men and women who make our country run."

President Trump also acknowledged Charlotte's hosting of the 2020 Republican National Convention during his remarks at CPCC.

"I'm thrilled to be back in Charlotte, and the fact is, it's a very special place. So special we chose it for the 2020 Republican National Convention, right?" Trump said. "A lot of places wanted it, a lot of places want those things where so many people come in and spend their money. Charlotte's been a great place for us."

Trump also mentioned low unemployment numbers. According to a report from NBC News in July, the number of Americans filing for unemployment benefits hit its lowest level in more than 48 years. Trump praised his administration's job creation, saying 156,000 of the more than 4 million jobs created nationwide were in North Carolina.

"Unemployment filings have dropped to the lowest level in over half a century," Trump said. "You've heard me say this many times, I'm very proud of it."

The second stop for the president will be Carmel Country Club for a private fundraiser to benefit Republicans Mark Harris and Rep. Ted Budd, both of whom are facing tough challenges in November's general election. During his stop at CPCC, Trump praised Budd, saying he loves the people of North Carolina, and even guaranteed that U.S. Congressman Mark Meadows will "do just fine" in his race for the 11th Congressional District against Democrat Phillip Price in November.

For both candidates, Trump's visit is not only important because they have backing from the White House, but they're hoping it will help raise campaign funds to close the gap on their opponents. Harris, who defeated incumbent Robert Pittenger in May's primary for the nomination in North Carolina's 9th Congressional District, spoke exclusively to NBC Charlotte about having the president's support.

"We just believe that there's a window of opportunity to see our nation move in the direction that will continue what's already been started," Harris said. "We believe that the president set forth an agenda that we're very supportive of.

"I think the president is certainly going to be a shot in the arm."

Tickets for the private luncheon start at $1,000 per head to get in the door. Donors can also pay up to $25,000 to mingle with Trump and have their picture taken with him during the event. Harris said he expects at least 300 people to attend the fundraiser.

"I think people are ready for a different kind of leadership in DC," he said. "I believe in putting country before party."

RELATED: How powerful is the Trump Effect?

And it should be noted that this race isn't the first time Mr. Trump has put his name behind a candidate. So, how strong is the so-called Trump Effect? Just this week, he encouraged Republican voters in Florida to back Ron DeSantis in his bid for the GOP nomination. DeSantis won the primary and will run for governor in November.

In Pennsylvania, Trump got behind Lou Barletta's bid for the Senate. He won. In South Carolina, the president's support was a factor in Gov. Henry McMaster's primary win. But every candidate Trump supported didn't win. Examples include Judge Roy Moore in Alabama. For now, Harris and Budd hope that Trump's support will be exactly what they need to get over the hump in their respective races.

The president's visit will also have a major impact on holiday travel and commuters in the Queen City Friday afternoon. NBC Charlotte has learned that some Charlotte-Mecklenburg Schools bus routes could be delayed, several roads will be closed for the presidential motorcade, and all flights in and out of Charlotte will be halted for the landing and takeoff of Air Force One.

Some afternoon @CMSbus drop-offs in the southern portion of the county may be delayed due to traffic interruptions during a presidential visit to Charlotte Fri., Aug. 31. We ask for patience during any rerouting. This traffic issue may interrupt the accuracy of @HereComesTheBus. pic.twitter.com/GWpquILEav

Charlotte-Mecklenburg Police announced that while Trump is in Charlotte, some roads, particularly near Charlotte Douglas International Airport and Carmel Country Club will be closed entirely for short periods between noon and 6 p.m. Friday. Significant traffic delays are expected on Billy Graham Parkway, I-77, Johnston Road and Park Road throughout the afternoon.

Drivers headed to or from @CLTAirport are asked to avoid Billy Graham Parkway. It is recommended that drivers access the airport via Little Rock Road, Interstate 85 or northbound Interstate 485 to Wilkinson Blvd.

All of this on top of an already hectic first day of Labor Day weekend.

For the latest alerts and notifications surrounding President Trump's visit to Charlotte, download the NBC Charlotte mobile app. It is available on both iTunes and Google Play.