Lancaster County's coroner is worried as her morgue surges with victims from COVID-19. She fears makeshift freezer trucks could be necessary in the coming months. 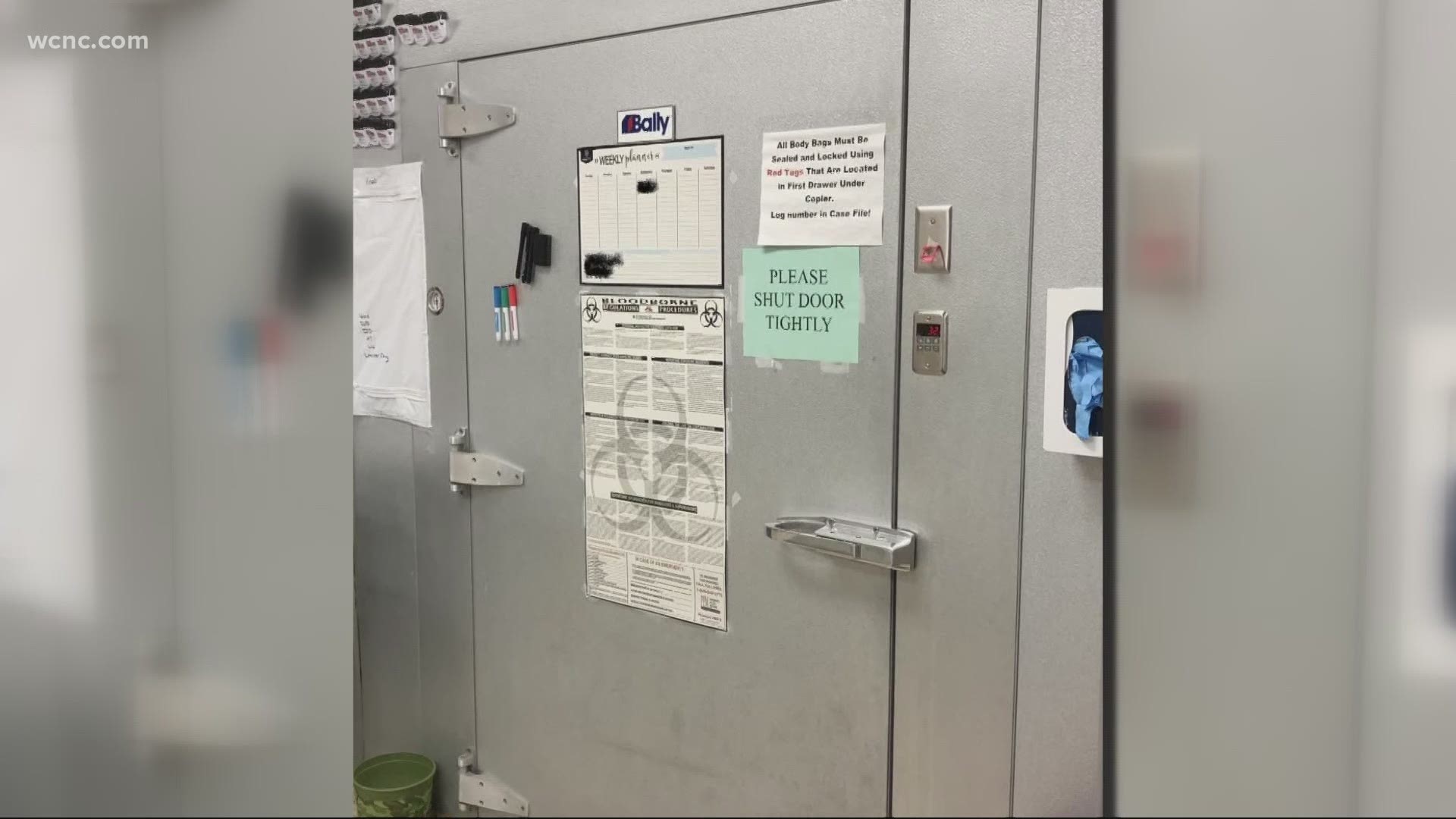 LANCASTER, S.C. — The Lancaster County Coroner's Office hit maximum capacity at its morgue on Monday, with 75% of the bodies being COVID-19 victims, according to Coroner Karla Deese.

The morgue typically holds 11 bodies, however, Deese said she's been able to fit 13 bodies before. On Monday, the morgue was holding 12 bodies. A majority of the people died from coronavirus.

"Some days I feel like there's no end in sight," she said.

On Monday, she took to Facebook, describing how busy her colleagues were responding to calls.

"My heart goes out to our EMS, our hospital staff, and families.  Getting slammed is an understatement.  When the radio traffic is a tangled web of re-routing patients, due to multiple hospital diversions, due to being at max capacity, your heart just aches a little," her post read.

"We have all exhausted ourselves, our resources, and now our facilities. The Coroner’s office has also reached max capacity. Such sad times right now," she went on to write.

By the end of the day, a few funeral homes relieved the strain by picking up some of the bodies for burial plans.

"It's very hard for us to keep up," Deese told WCNC Charlotte.

Her team is exhausted. Some have spent several weeks working every day, no days off. They suit up daily in personal protective equipment to collect the dead when called.

From head to toe, they are fully protected. An N-95 facemask, plus a hairnet, a face-shield, double-gloves, and a full hazmat-looking suit is worn.

All COVID-19 bodies are put in a body bag, then moved into a second bag as a line of defense against the spread of the virus.

The process is called a "COVID removal."

She will now have to lean on surrounding coroner's offices and funeral homes to help. Thankfully, many have stepped up and offered, Deese said.

However, she's still concerned as cases and deaths continue to rise.

"Eventually, nobody's going to have room," she worried.

That's when she suspects the dead will rest in makeshift freezer trucks when they're called in.

Deese said the trucks are ready and can be deployed in a matter of hours by the South Carolina Coroner's Association.

She fears they could be used in the coming months.

As of Monday night, 5,056 South Carolinians have died from coronavirus, according to the state's dashboard.

"It has been unbelievable lately, the numbers are really ticking up and deaths," Deese said.

It's why she's asking everyone to do your part.

"It truly is a matter of life and death," she said.

Editor's Note: The broadcast version of this story, which is the attached video, noted Deese's youngest COVID-19 victim was a 28-year-old man. The 28-year-old victim was a woman who left behind three children.