The tornado touched down near Pineville, and traveled across southern Mecklenburg County into Matthews at around 12:18 p.m. 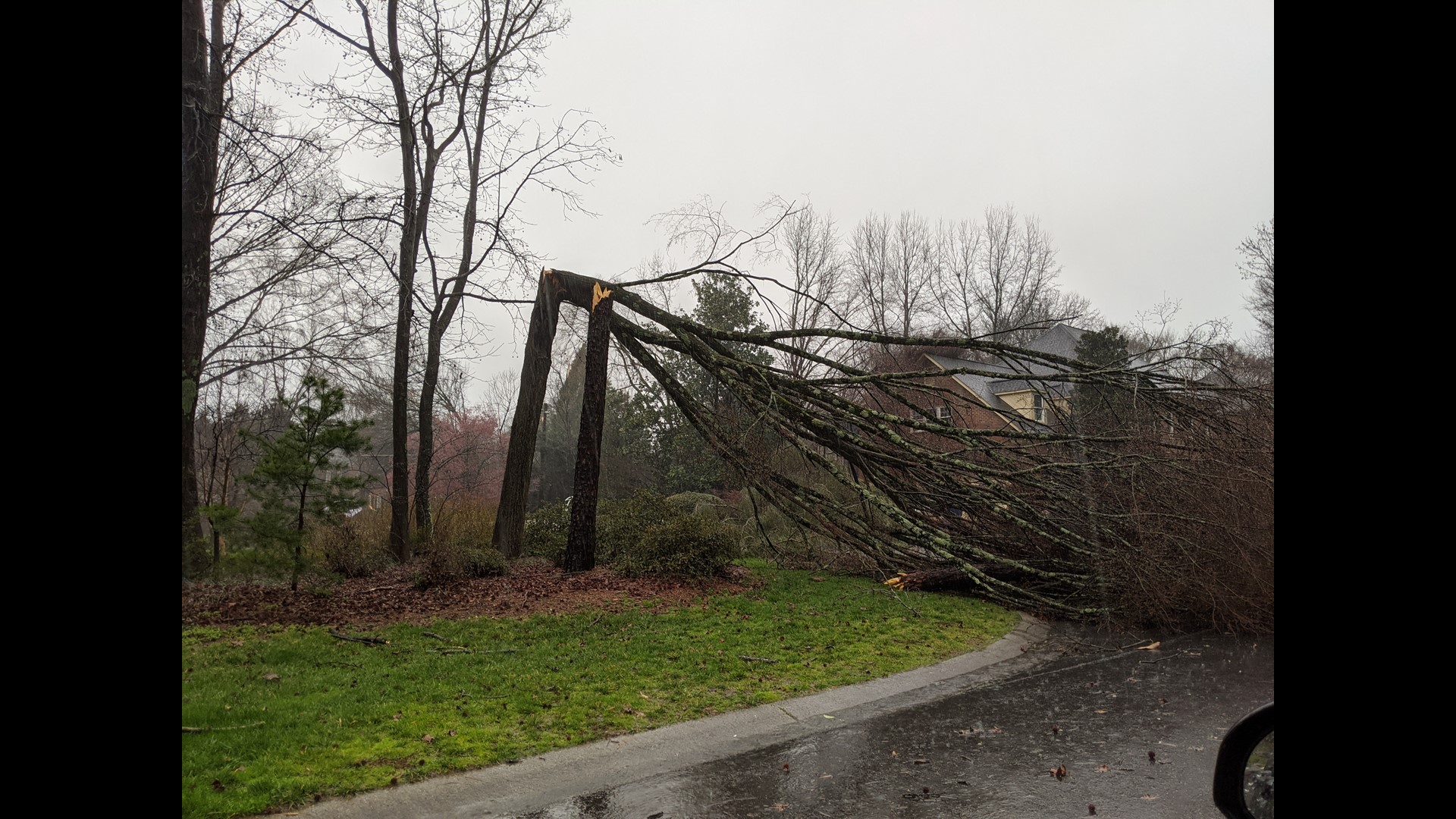 NWS sent their survey crews to southern Mecklenburg Friday to investigate the storm damage and confirm a tornado did touchdown between Pineville and Matthews.

Trisha Palmer, with the National Weather Service, said the EF-1 tornado had maximum sustained winds of 95 mph and the path of the tornado was at least 17 miles long.

"We saw mostly snapped trees in Pineville," Palmer said. "Most of the structural damage was limited to trees falling on houses."

Palmer said once the tornado touched down it lifted up and then dropped back down several times over 17 miles.

NWS said they could see the rotation of the tornado from their doppler radar in Greenville, and the terminal doppler radar located near Charlotte-Douglas International Airport.

Palmer said NWS is able to determine if a tornado caused damage by observing the trees and noticing how they fall.

"First we find a start and an endpoint," Palmer said. "We look at the way the trees fall."

In this event, the tornado caused trees to fall over in multiple directions. Whereas during a downburst or a microburst, Palmer said the wind would have hit the trees and the trees then spread out in a divergent pattern. In a straight line wind event, the trains would all have been blown down in the same direction.

"That was the area where we saw quite a bit of trees down," Palmer said about the Matthews neighborhood.

NWS is sending out their crews to North Mecklenburg, Gaston and Lincoln Counties to investigate damage in those locations.

RELATED: Here are all of the tornadoes confirmed in the Carolinas Thursday

Tim Porter, City Arborist for the City of Charlotte, said three to four dozen more trees fell on Friday according to 911 records. Porter said that’s due to high winds combined with saturated soil.

Porter said it could take two to four weeks to get all of the trees up and said they should have major roads clear by Friday evening.

It was an unprecedented storm, leading to an extreme clean up.

“Not very often do we have to use it,” Scott says of a massive crane they used on Conestoga Drive right on the line of Matthews and Charlotte.

But Friday they had to bring it out after a tree split a home in half.

“It demolished the house. It flattened the roof went all the way to the floor,” says Scott. 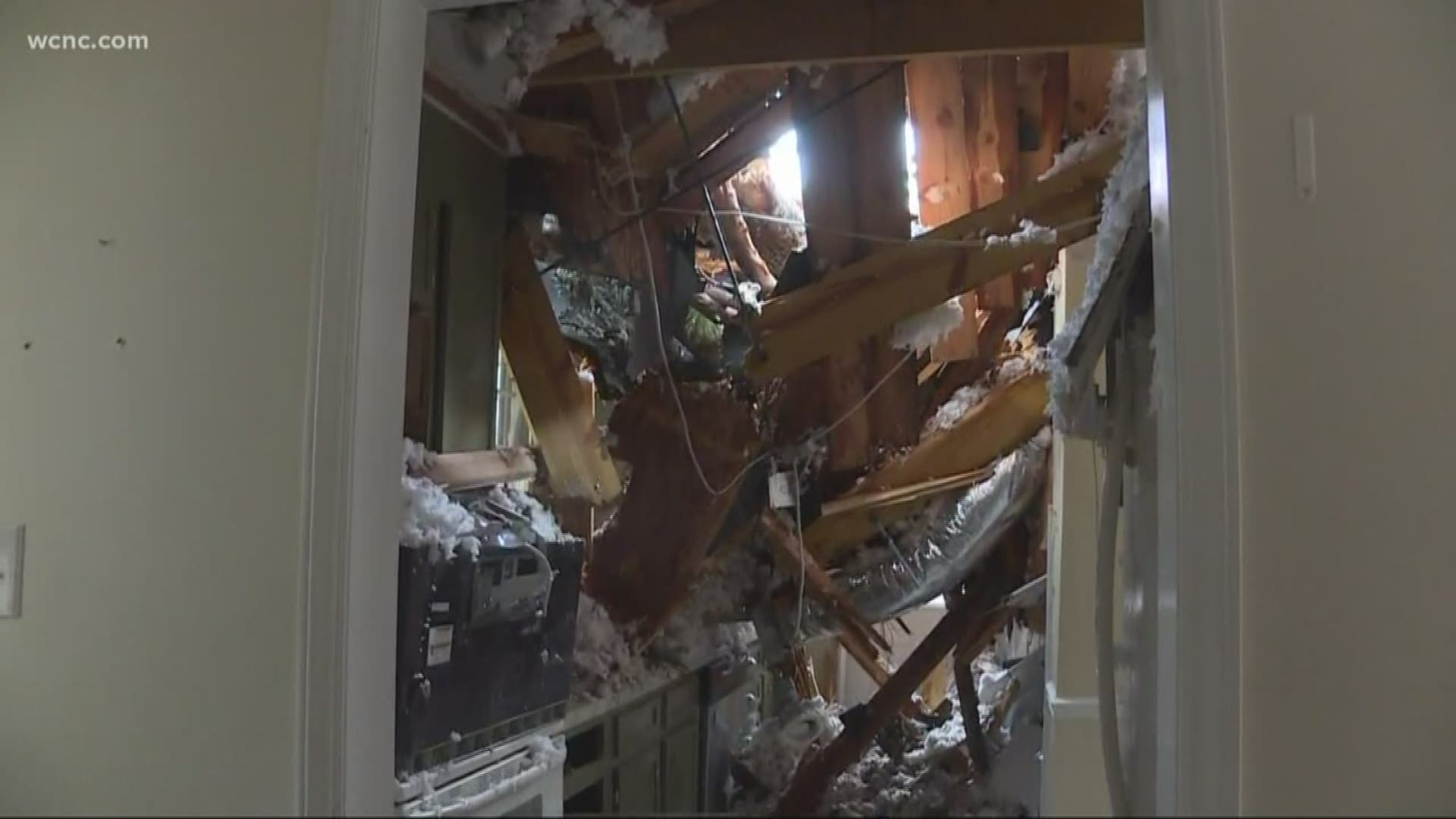 They worked branch by branch, slowly but surely cutting up the pieces and grinding them down to dust. They had to be lowered down into the house on the crane to get the job done, getting a closer look at the damage inside.

“We literally had to dig up things under the tree just to get our cables around to get it,” he says. The tree landed right on a bedroom, luckily no one was home during the storm.

Several families in the neighborhood dealing with the same thing.

“I think that I am not able to grasp the full realm all at once,” says Kristen Rytel. At least 7 trees fell on her property.

Saws humming in the neighborhood all day long as they try to grasp damage done to their neighborhood when a tornado touched down, ripping through their property.

The damage inside even more devastating, the sun shining straight through the roof and insulation scattered everywhere. The biggest trees landing on the kitchen, where they spend most of their time.

What's ahead in terms of rebuilding is overwhelming at this point, but even more so, wondering what could've been if they were home.

“Our son when he's home likes to lay on his bed on the iPad, headphones in and that just would've been right on top of him,” says Mr. Rytel.

They were able to get inside and salvage some sentimental items like family heirlooms and pictures.

“The important stuff we got and nobody was harmed the cats are safe so for that we're very grateful,” says Mrs. Rytel. 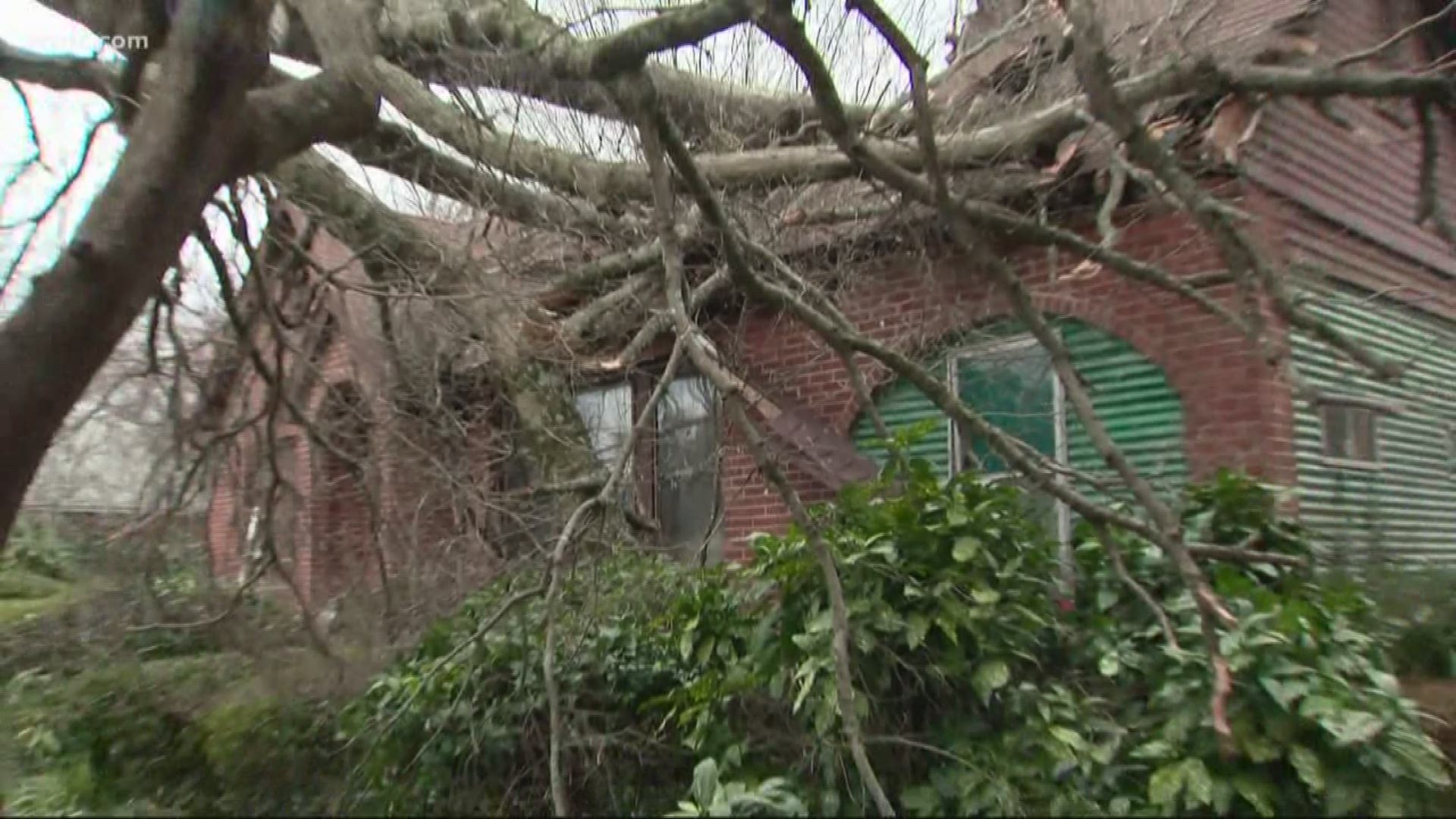 Residents in Charlotte and across the Carolinas are continuing to clean-up after damaging storms Thursday.

With the wind and rain gone, the attention turns now to clean-up and the continued flood risk.

Some areas in the foothills reported wind gusts up to 58 mph, with some roads underwater in Burke and Catawba Counties.

Rain fell every at times, challenging trees to try and hold their own in saturated soil.

Some Duke Energy customers have been warned to not expect power back until at least Friday.