The Gold Line will stretch from Johnson C. Smith University on Charlotte's near west side, through uptown and Elizabeth and end just over the Hawthorne Lane Bridge. 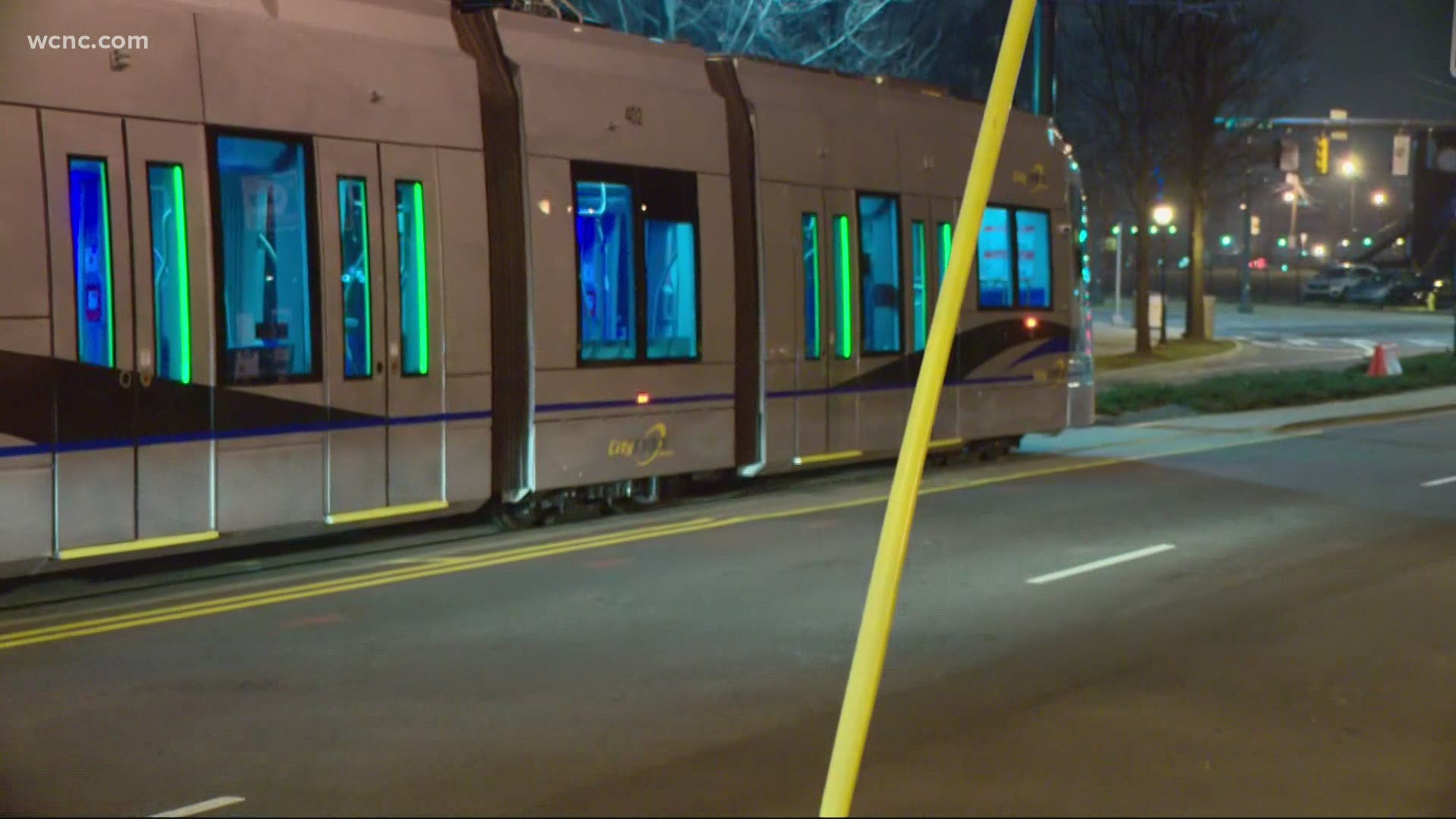 CHARLOTTE, N.C. — It's been years in the making, but now you will see a modern streetcar being tested through uptown Charlotte at night.

Phase two of the Gold Line could open to the public as soon as late-April or early-May, according to CATS Gold Line project manager David McDonald.

For the next several weeks to months, crews will be testing one of the six streetcars as part of the procedure before they open the route up to the public.

"It's exciting! It's great to get the vehicle out and, you know, make sure everything works," McDonald said.

The CityLYNX Gold Line is currently undergoing integrated systems testing, where crews will measure and certify platform clearances, adjust the overhead wires that the streetcars connect to, and ensure all electrical systems are working properly.

This type of testing will continue off and on for several weeks, according to CATS, only during the overnight hours.

Then, in the spring, there will be pre-revenue testing. This will simulate revenue service during normal operating hours, allowing training for the systems and streetcar operators, according to CATS.

"We've been doing a lot of work to get the project ready," McDonald added.

The four-mile Gold Line will run from Johnson C. Smith University through uptown, into Elizabeth and Plaza Midwood.

Currently only the 2.5 mile stretch from Center City by the Spectrum Center through Plaza Midwood will be tested. Last-minute construction still needs to wrap up before the west side portion of the track is tested, McDonald said.

Once opened, the four-mile stretch will include 11 additional stops with level-boarding platforms.

Each streetcar will be able to seat 56 riders and allow 199 standing passengers, in a non-pandemic world.

For many along the tracks, it's been a long time coming.

"Business has been flat year over year," Chris Mullis, the general manager at Hawthorne's New York Pizza and Bar in Elizabeth, said.

For four years he's dealt with a front-porch construction-disruption outside his business. He's lost customers throughout the project, and the COVID-19 pandemic was insult to injury.

"We're just glad to have the street reopened and all the mess cleaned up," Mullis said.

He's not sure if it will bring more and new customers to his restaurant once the streetcars open to the public. He said it will take years to bounce back from the losses his restaurant has suffered.

Across town in Historic West End, business has been hurt, too.

"It's been a roller coaster," said barber David Powell, Jr. at No Grease Mosaic Village on West Trade Street.

He hopes the Gold Line will soon bring new clients to his barbershop after suffering through loss of business from COVID-19 to area-construction.

"People on their lunch breaks will be able to leave the car parked where it is, jump on the light rail, come to Mosaic Village, get an awesome service and be able to make it back in time to work the rest of the day," he hoped.

This is Phase Two of the project runs east to west between Sunnyside Avenue and French Street.

However, the City of Charlotte and CATS want there to be a phase three. If constructed the entire Gold Line would stretch for 10 miles from Rosa Parks Place Transit Center past LaSalle Street in west Charlotte through Uptown and east, ending at Eastland Transit Center.

More funding would be needed for phase three.

Phase two cost $150 million that was split between the City of Charlotte and the federal government.