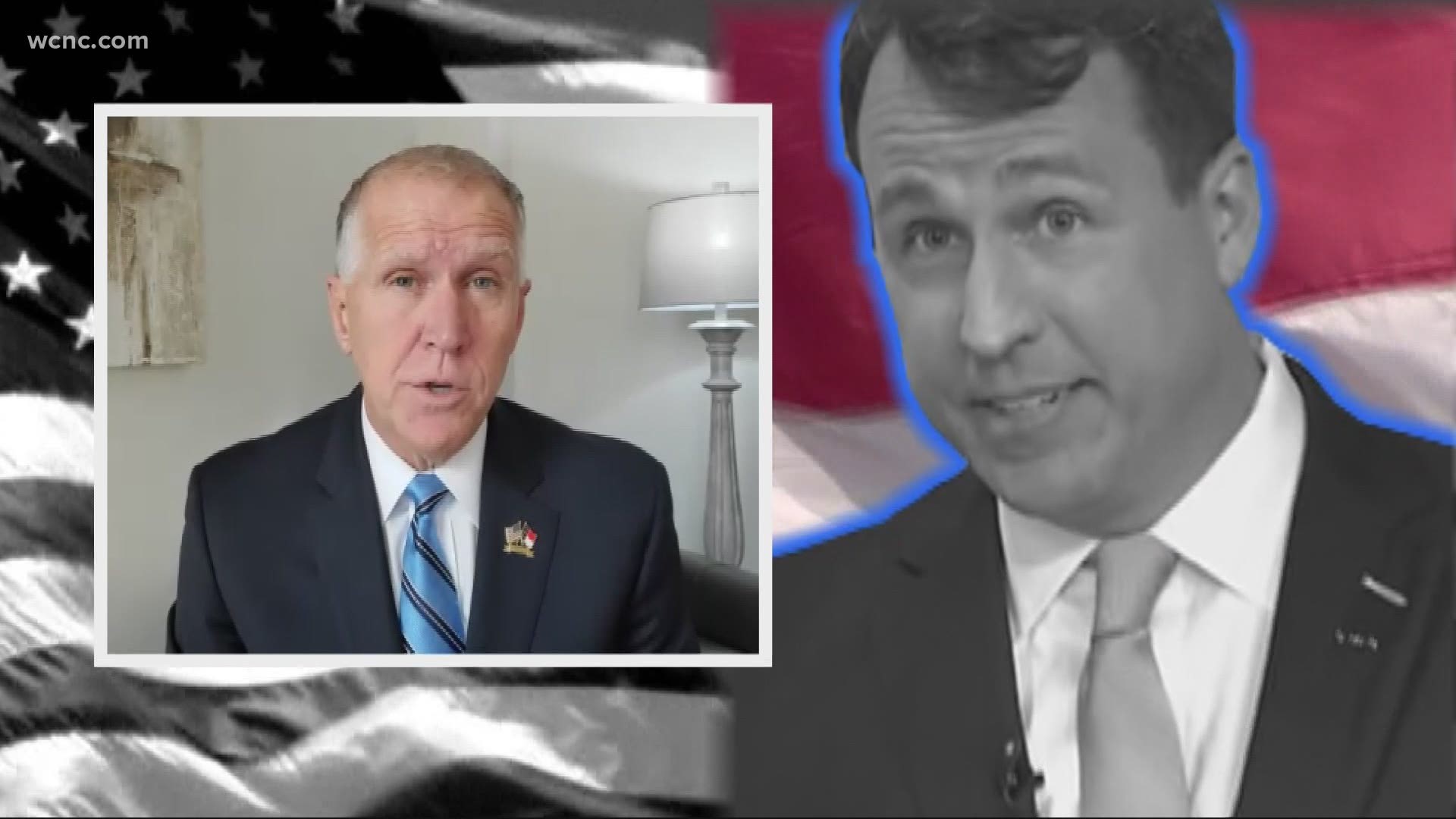 CHARLOTTE, N.C. — With just weeks to go until we know who will be sent to represent North Carolina in the U.S. Senate, incumbent Republican Senator Thom Tillis is laser-focused on democratic rival Cal Cunningham's sex scandal, as the veteran tries to move the focus onto other issues.

Weeks after bombshell reports showed Cunningham sexting and cheating on his wife with another veteran's husband, Tillis is still wanting an explanation.

RELATED: Could there be other sexual affairs? Cal Cunningham dodges.

Cunningham has apologized for his actions but has never offered an explanation, even when pressed to do so. In a virtual press conference, he was asked four times if there were other women with whom he's cheated with, and he never directly answered.

Still, voters don't seem to be swayed. The democrat still holds a slim lead in polls, 46.8% support to Tillis' 44.5% support, according to an average of Real Clear Politics polls.

When asked why voters should care about the scandal, Sen. Tillis said because it speaks to a candidate's credibility.

But when he was pressed on why he didn't demand explanations to President Trump's sex assault allegations and affairs, Tillis maintained there was no double standard.

"No, I think the standard should be the same," Tillis said. "Voters are entitled to make whatever choices they want to for president, but let's not lower the standards and say you can have an adulterous affair with the wife of a wounded warrior."

"What's the difference? Do we care about marital infidelity or do we not," reporter Hunter Sáenz asked Tillis?

"I care a lot about it," Tillis responded. "Which is why I don't think Cal Cunningham is fit for office."

WCNC Charlotte has asked Cunningham for an interview multiple times over the past couple of weeks but has been denied or ignored.

Still, under the scandalous noise, thousands of North Carolinians are still in need of financial help due to the long-lasting pandemic.

It's a task the next senator could have to work on if a deal isn't reached before election day.

"We have to pass a bill and we will have a vote this week," Tillis said.

WCNC reached out again to Cunnigham's campaign to request an interview for Tuesday with the candidate but was denied.

Instead, a campaign spokeswoman provided the following statement:

"The desperate attacks from Senator Tillis and his allies are because they cannot defend his unpopular record taking away health care protections, the botched coronavirus response and failure to stand up to the president," Rachel Petri said in a statement. "These are issues Cal has talked about throughout this campaign, has always taken a stand on and they're why North Carolinians are supporting him."