A line of strong thunderstorms brought strong winds to Charlotte and the surrounding Carolina counties Tuesday. 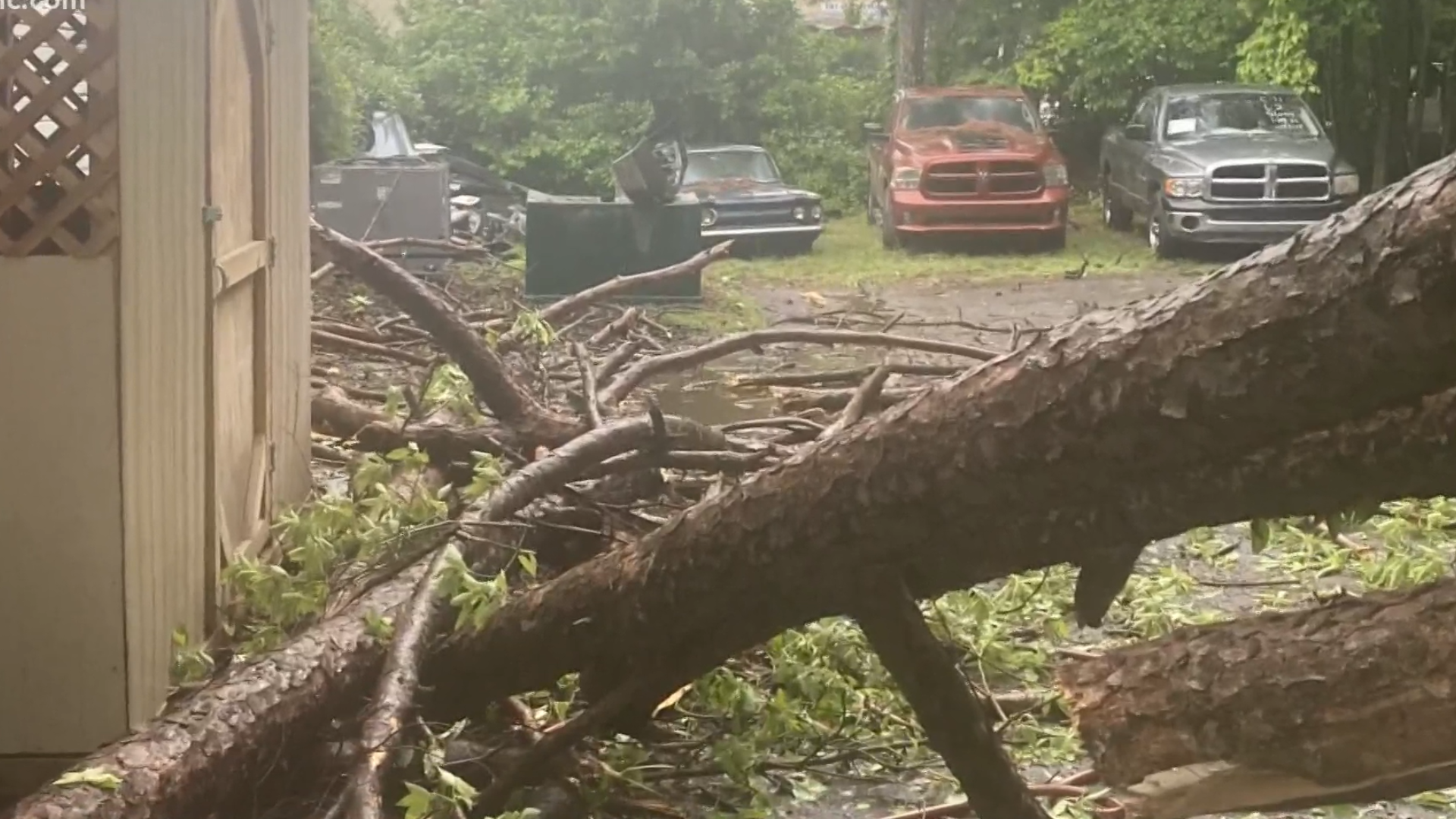 CHARLOTTE, N.C. — In Mecklenburg County, over 7,000 Duke Energy customers were without power at one point Tuesday, including in Matthews where electricity and traffic lights are out East Independence Blvd at Matthews-Mint Hill Road.

At least one person was injured when a tree fell on a business in the 10900 block of East Independence Blvd, officials told WCNC charlotte. The person, one of the car technicians, was taken to the hospital. The extent of their injuries was not immediately known publicly.

“He’s the only tech that does what he does so it’s going to push us back two maybe three months of work and we’ll have to work around it," Karessa Jackson with Independence Collision and Auto Repair said.

Traffic Alert - The traffic lights are out at E. Independence Blvd. and Matthews Mint Hill Rd. Please plan for and expect delays in this area until repaired. @DukeEnergy has been made aware and is responding. @MatthewsFireEMS @townofmatthews

Portions of Ballantyne were also without service.

In Cabarrus County, 1,787 customers were without power.

Another 1,563 Duke Energy customers were without power in York County.

In all of those areas, Duke Energy was estimating the time of restoration as after 8 p.m.

Practice rounds for the PGA Tour's Wells Fargo Championship at Quail Hollow Country Club in Charlotte were temporarily delayed as another round of storms moved through the Carolinas Tuesday.

Golfers, staff, and spectators were being told to seek shelter as thunderstorms with strong winds and lightning moved through Charlotte.

In Uptown Charlotte, officials at Truist Field were also watching the weather as the Charlotte Knights prepared for Tuesday night's opening day game. Eventually, the Knights were able to kick off the season after all.

In York County, the storms are believed to have blown down trees near McConnells, according to the county's emergency management office.

When the power went out there neighbors say they chose to improvise.

“Originally he was just going to go to Zaxby’s, but the line was all the way out to the road so he went up to the store brought his own wings, and decided to grill," Bridget Hamler said.

On Tuesday, the Charlotte metro region is at "low" risk for severe weather, but Panovich said that could easily be upgraded.

"The air mass ahead of this front is unstable already. Warm and humid air is creating a favorable environment for severe weather," Panovich said. "Don't be surprised if we upgrade to medium risk. Because of the way this is shaped, like a bow and arrow, we call it a 'bow echo,' this, to me, has straight-line winds risk written all over it. Typically, we tend to see straight-line winds with that bow and arrow shape on the radar."

The line of storms moved through the North Carolina mountains by around 1 p.m. Areas like Asheville, Boone, Blowing Rock and Hendersonville were among the first Tuesday to see the return of storms.

As the storms tracked and south and east, they arrived by 3 p.m. in the foothills - including Shelby, Lincolnton, Gastonia, Hickory.

By 4 p.m., they arrived in the Charlotte metro along the Interstate 77 corridor including in Huntersville, Mooresville, Fort Mill, and Rock Hill.

Through 6 p.m., the storms moved through Lancaster and Chesterfield, where it threatened with severe winds upwards of 70 mph.

Panovich said there's no "overwhelming" threat of tornadoes, but you can never rule out the possibility of rotating storms during severe weather.

"There's thunderstorm fuel in the atmosphere," Panovich said. "Because there's time to build ahead of the storms, that increases our risk. We're looking at 2,000 to 3,000 CAPE. Anything 1,000 or higher, that's when you start to pay attention, 2,000 is a legit chance and anything above that, you're talking about significant severe weather risk."

Ahead of the storms, there were no widespread watches issued for the threat of severe weather.

Most of the Charlotte area was spared by significant damage during Monday's storms. Severe winds appeared to top a truck near Oakboro in Stanly County, according to social media pictures shared with Brad Panovich.

Looks like we may have had a brief tornado touchdown near Oakboro around 2:20pm Radar showed a strong couplet and damage reports there. #cltwx #ncwx #scwx #wcnc pic.twitter.com/T8utpjlkUo

Those strong winds that blew through Stanly County also caused trees to be completely uprooted -- some crashing into parts of homes, along with damage to metal carports, barns, and blown-off roofing.

Severe weather earlier Monday left damage behind in Georgia as it moved eastward into the Carolinas.

If you find yourself inside a tornado warning, you should immediately seek shelter inside a sturdy structure. Inside that structure, you want to find the most interior room on the lowest level of the structure. Basements are most ideal but in buildings without basements, you could consider an indoor closet, bathroom, or any interior room.

RELATED: How to prepare for severe thunderstorms like Brad Panovich

You should be sure to protect your head with a helmet or pillow. When entering the shelter, you should ideally be wearing shoes and pants. In the event you encounter damage when exiting your shelter, the clothing could help protect you against storm debris.

RELATED: What is a bow echo?

Download the WCNC Charlotte mobile app for the latest updates from Brad Panovich and the First Warn Storm Team.