Nashville's shipping container apartments could be inspiration for Charlotte

An 83-unit complex made of steel containers is nearing completion in an up-and-coming Nashville neighborhood. The project includes smaller units at reduced rent. 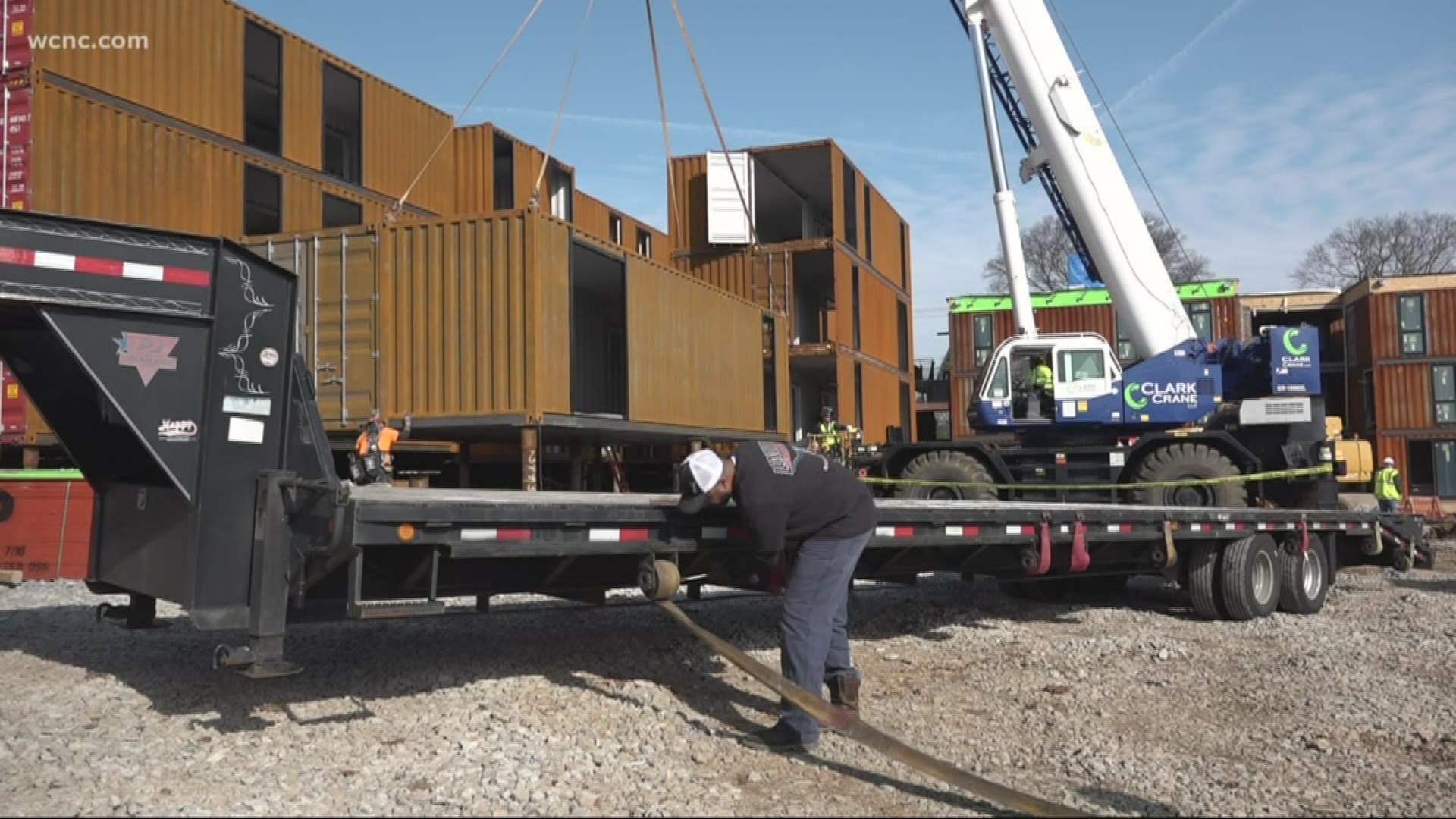 NASHVILLE, Tenn. — A Nashville developer is using the nation's surplus of shipping containers to build affordable housing units. His idea is a possible solution Charlotte might want to consider.

Nashville, much like Charlotte, is battling its own housing crisis. As people like police officers, teachers and nurses are getting pushed out of Music City, Shawn Bailes is creating an 83-unit container apartment complex meant to help house the working poor and millennials who want less.

"We're trying to do something that's unique, sustainable and affordable," Bailes said. "I call it the half loaf theory of bread. If you go to the grocery store, you don't eat a lot of bread, why would you need to eat a full loaf of bread? You now have a half loaf of bread."

His project, 83 Freight, is a combination of smaller studios, one-bedroom and two-bedroom units. Bailes' goal is to rent the apartments at 20 to 25% less than the going rates.

Bailes, the president of FMBC Investments and Capital City Construction, is building the complex in the up-and-coming WeHo neighborhood in Nashville.

The container units, which reflect their original condition, are close to downtown, public transportation, and soon -- the city's new Major League Soccer stadium.

"I think the mix of industrial with traditional drywall, it gives it some panache factor with it," Bailes said.

In Nashville, for roughly $1,400, you pay more and get slightly less than you would in Charlotte for a new apartment, according to Rent Café. Charlotte housing advocates think container homes are worth considering here too.

"I think we should be exploring any and all options," Action NC Community Organizer Jessica Moreno said. "It's almost like we can't afford not to look at those options, you know?"

The idea is slowly gaining momentum with smaller projects in Texas and Portland.

"They're appealing. They're nice to look at. It's not like we're sticking people in an ugly box. They're modern," Moreno said. "I think it's time to seriously start getting to the work of looking at the cost-effectiveness, the impacts on the environment. Let's take advantage of the materials we have around. We're close to the coast. It might be a good option for us. If we use container homes, they don't require a lot of maintenance on the outside. It might be a good option to make sure that people have safe living options, so it's something that I'm interested in."

Bailes said there are plenty of benefits. For one, the containers, used only once to ship goods to the United States and certified free of hazardous materials, cost somewhere between $4,000 and $5,000 each, he said.

Construction is also faster, since builders can tackle infrastructure and framing at the same time, unlike traditional building.

"In this process, we're doing things in parallel instead of series," Bailes said. "I think in the long run we're going to save money. We're going to be able to deliver products quicker once we get the process down. The next project we can probably erect in half the time."

There are downsides though.

Bailes said he initially struggled to get financing for the new concept, spent "a pretty lengthy timeframe" educating Nashville's codes department and had to come up with a way to make the steel units soundproof.

Despite those challenges, in the end, Bailes made the project happen. He said developers from Atlanta to Austin have since taken notice.

In fact, he said six to eight developers from other cities (not Charlotte) flew to Nashville to look at the project themselves.

Bailes said he's already looking into a second smaller development. In the meantime, he expects the first tenants to move-in to 83 Freight in May.

Charlotte Mayor Vi Lyles has said she "would like to learn more about the container home concept." Meanwhile, a spokesperson for the City of Charlotte said "there is no major conversation" about the idea right now.

"The city has not had many inquiries into 'container homes' and there is no major conversation about it, currently," a spokesperson said. "That said, it's a concept familiar to city planners and in development circles, and it's something that could be on our menu of affordable housing solutions. The Charlotte Zoning Ordinance has no minimum square footage requirement for single family dwelling units, as long as the unit is built to state building code standards."

This story is part of WCNC Charlotte's "I Can't Afford to Live Here" series with the Charlotte Journalism Collaborative (CJC) in efforts to find solutions to Charlotte's affordable housing crisis.  The CJC is made up of several key journalistic partners and institutions including: The Charlotte Observer, La Noticia, Queen City Metro, Qnotes, WCNC Charlotte, WFAE, The Knight School of Communication at Queens University, Free Press, and the Charlotte Mecklenburg Library.

MORE FROM "I CAN'T AFFORD TO LIVE HERE"

A 73-year-old woman has spent eight months trying to find a new home. But she may be forced to live on the streets.