Thom Tillis claims victory, Cal Cunningham waiting on all votes to be counted 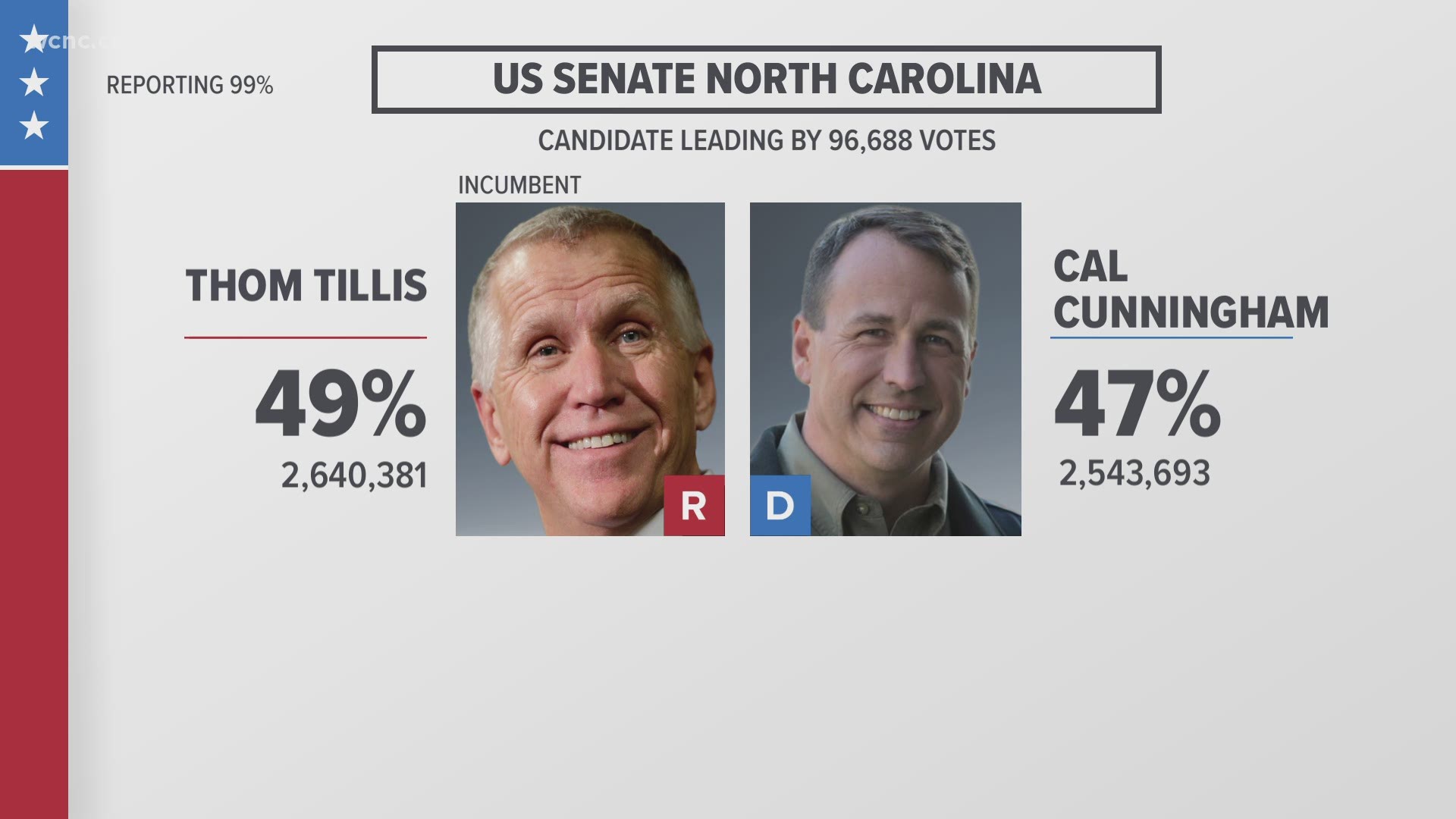 CHARLOTTE, N.C. — North Carolina Republican Thom Tillis declared victory over Democratic challenger Cal Cunningham in the race for the state's US Senate seat up for grabs in the 2020 election on Nov. 3, 2020.

Speaking to supporters shortly after 11:30 p.m., Tillis declared victory -- though the North Carolina U.S. Senate race between him and Cunningham has yet to be called. According to North Carolina election officials, there are about 115,000 votes left to be counted across the state. As of 5 a.m. Wednesday Tillis led Cunningham by a margin of 2,640,381 to 2,543,693.

"We did it," Tillis said. "We beat all the odds, right? We’ve heard this before we’re down in the polls, you have no chance of winning and I believed in every single one of you."

Tillis first thanked his wife of 34 years before telling the crowd, mainly made up of family and staffers, that he promises to work tirelessly over the next six years.

"Ladies and gentleman I'm here to tell you tonight with six more years in the US Senate that I will work tirelessly to make sure we continue to provide opportunity and continue to fulfill promises and continue to make this nation and this state the best it can possibly be," Tillis said.

"The State Board of Elections is continuing to count ballots, and we plan to allow that process to be carried out, so every voter can have their voice heard."

NCGOP released the following statement on the Senate race:
It's important to note that the race is still too close to call.

"The North Carolina Republican Party to see that Senator Thom Tillis secured his bid for reelection. Tillis's margin of victory is insurmountable, and we looked forward to him representing North Carolina for another term in the United States Senate." NCGOP Press Secretary Tim Wigginton."

The race has not been officially called. North Carolina absentee ballots successfully postmarked by Election Day have nine days to arrive.

After speaking, Senator Tillis ended his speech by saying he was going home to watch the rest of the election results, saying he prays Donald Trump wins. Cunningham didn't make an appearance or speak as the night came to an end.

This race is the only U.S. Senate seat from North Carolina that will be decided in 2020. North Carolina is one of the battleground states that could flip control of the Senate, and this race is now officially the most expensive Congressional race in U.S. history. The North Carolina Senate race will be closely watched across the nation as voters select the next U.S. President between Republican Donald Trump and Democrat Joe Biden. Democrats hope to capture the U.S. Senate, while Republicans are looking to make gains in the U.S. House of Representatives.

Cunningham did have a lead for some time in most polls but his advantage has shrunk after it was revealed he had an extramarital affair. Cunningham has refused to answer questions about the affair. According to the most recent NBC News/Marist poll, released on October 30, Cunningham has a 10-point lead over Tillis among likely voters in North Carolina.

Visit this page for complete 2020 North Carolina election results. Download the free WCNC Charlotte app (Google Play | Apple devices) to receive alerts as the numbers come in. Send us any questions by text at (704)-329-3600.

Who is Thom Tillis?

Thom Tillis, who turned 60 in August, was elected as North Carolina's junior senator in 2014.

Tillis was born in Jacksonville, Florida but his family moved more than a dozen times during his childhood. Tillis never attended the same school two years in a row, as his family lived in New Orleans, as well as Nashville, Tennessee. He has a bachelor's degree in technology management from the University of Maryland. 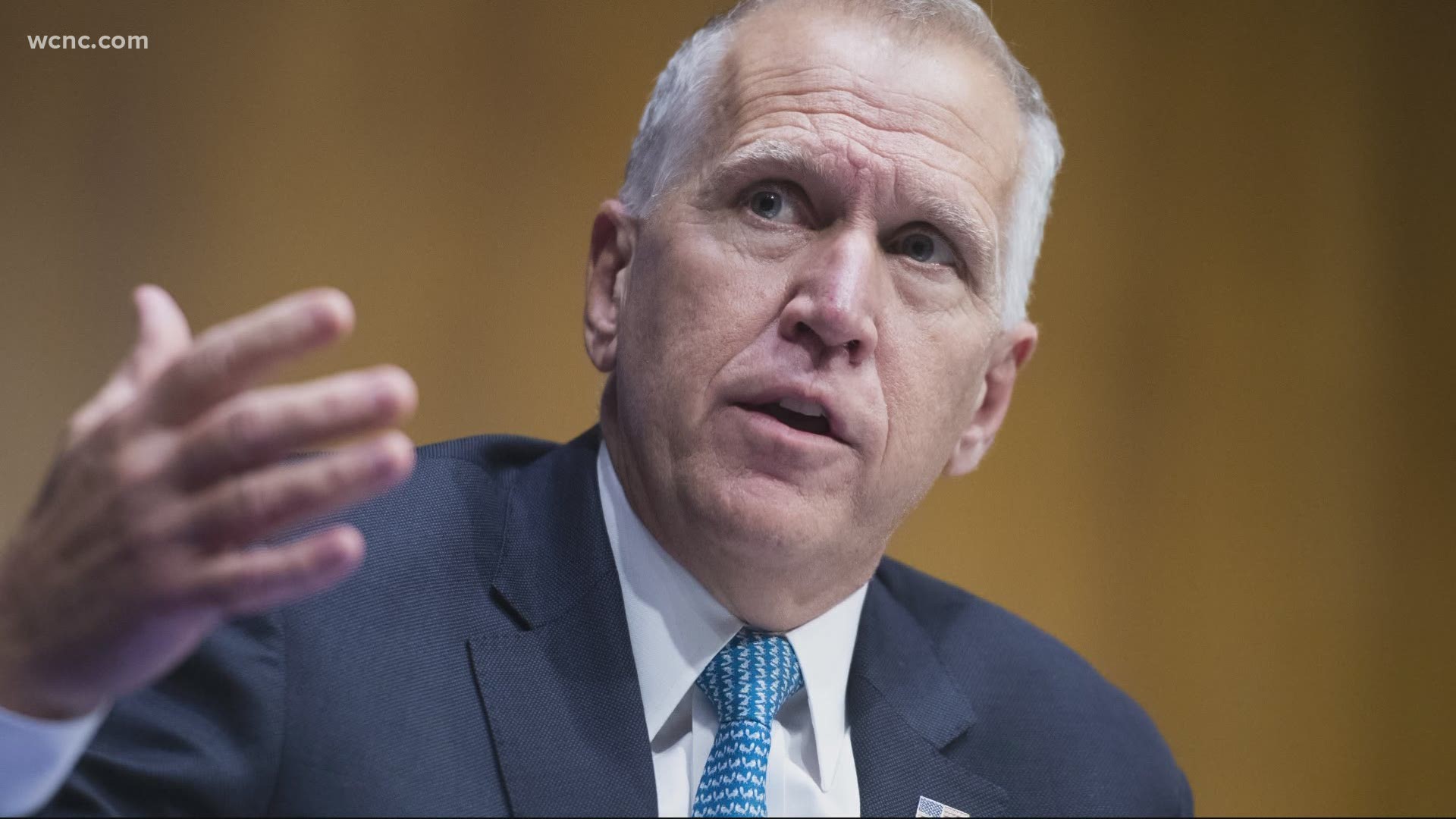 Thom Tillis lives with his wife, Susan, in Huntersville, North Carolina. They have two grown children and two grandchildren, according to his campaign bio.

Who is Cal Cunningham?

James Calvin "Cal" Cunningham, who turned 47 in August, is a former North Carolina Senator who was born in Winston-Salem, North Carolina.

Cal Cunningham attended Vanderbilt University before transferring to the University of North Carolina at Chapel Hill, where he graduated in 1996 with a degree in political science and philosophy. Cunningham and his wife, Elizabeth, live in Raleigh with their two teenage children, Will and Caroline.

In 2002, following the September 11 terrorist attacks, Cunningham volunteered to serve in the U.S. Army Reserve. He has served three active duties in Iraq and Afghanistan. Cal Cunningham was awarded the Bronze Star and the General Douglas MacArthur Leadership Award for his role in helping prosecute contractors for criminal misconduct.

When will North Carolina election results be announced?

The short answer is it depends. Polls in North Carolina officially closed at 7:30 p.m. on November 3, with some extensions due to interruptions in voting. Election officials start by tallying early in-person votes and absentee ballots that have been received prior to Election Day. Officials then begin counting votes cast on Election Day. The State Board of Elections hopes to have 97% of the vote counted by Election Night.

County election boards will meet on November 13 to certify votes. From there, the numbers go to the State Board of Elections, which will declare results official on November 24.

Those dates are if everything runs smoothly. Remember, official results can take longer if there's a recount.